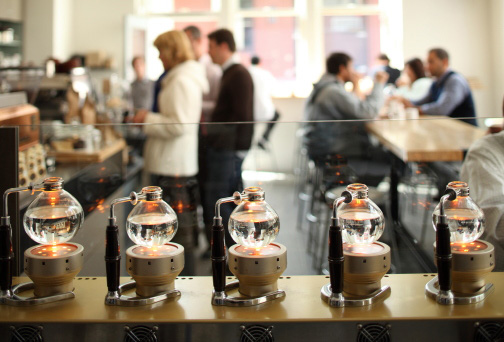 $20 million is quite a hill of beans, and it’s an especially large hill for a coffee chain with 11 locations. But that’s just what Blue Bottle Coffee is sitting on top of right now.

Blue Bottle is a high-quality purveyor of coffee that roasts its beans in small batches using vintage roasting machines, packs them in compostable bags, and sells them within 48 hours of roasting. Like other quality, “slow coffee” shops that have sprung up in the past few years, such as Ritual Roasters and Philz, Blue Bottle’s usual method of preparation is the pour-over: What your dad probably called “drip” coffee, except this is done with great care, one cup at a time, by a specially-trained barista.

The coffee is delicious, and while pricey, it doesn’t seem too expensive for those already softened up by several decades of buying brews at national chains: $2.50 per cup or so.

Perhaps thanks to that high sticker price, Blue Bottle is a surprisingly big business for a coffee chain with seven San Francisco Locations and four in New York. The Wall Street Journal reported in February that the company pulled in $15 to $20 million in revenue last year. Even more attractive to the venture capitalists who are investing in the coffee business is the fact that its revenues have grown by 50 percent every year since the company was founded.

Still, it’s hard to imagine what a coffee chain with seven San Francisco locations, four in New York, and a dedication to craft-roasting beans needs with $20 million. Expansion? A Blue Bottle in every mall? Its own 3-D iPad app?

The fund raise is disclosed in an SEC filing that appeared today. True Ventures led the round, according to Tony Conrad, a venture partner at the VC firm.

Blue Bottle is based in Oakland, Calif. and employs about 200 people in San Francisco and New York.

Corrected 10/17: True Ventures led the funding round, not Index Ventures.