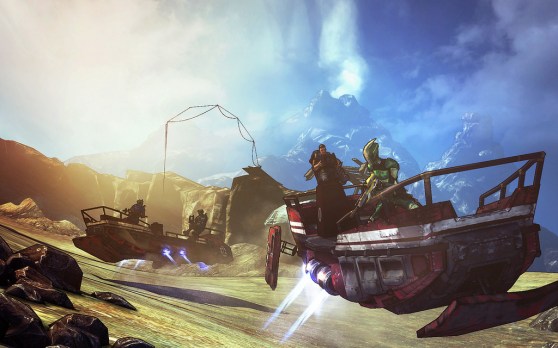 The first story-based downloadable-content pack for Borderlands 2 is here, and it brings plenty of new loot, new areas to loot, new enemies to kill for loot, and, most important, new loot.

Sending you and your fellow Vault Hunters to Pandora’s sprawling deserts, the Captain Scarlett and her Pirate’s Booty DLC tasks you with uncovering the lost treasure of the fearsome Captain Blade (who may or may not actually be fearsome at all) by killing sandworms, riding Return of the Jedi-esque sand skiffs, and assembling a magic compass. It all sounds thrilling, but is it enough to justify going back to Pandora?

Of course it is, as if you weren’t tipped off by “new loot.”

Two great settings in one

Pirate’s Booty officially begins when you visit Oasis, a picturesque beachfront resort town where absolutely no one has died of dehydration (I swear). Well, at least that’s what the only living resident, a man named Shade, wants you to think. It turns out that everyone else was either killed by pirates or lack of water when the vast ocean that used to cover the area dried up.

This is actually one of the most clever conceits of the whole DLC adventure. The campaign and sidequests are pirate-related, asking you to explore shipwrecks and kill bandits that swap their traditional white masks and machine guns for Jolly Rogers and cutlasses, but it all takes place in an area with barely a drop of actual water. This allows the developers at Gearbox to kill multiple tropes at once and tell story that’s part Jack Sparrow and part Jabba the Hutt.

Take, one of my favorite areas in the game: The ship owned by the titular Captain Scarlett (and her titular booty). It’s a massive base housing a handful of unsavory sailor-types, a fair amount of cash and ammo-filled treasure chests, and various other things you’d expect to find on a high-seas vessel … except this one is hidden in a cave and hovers above the sand.

It also has a lighthouse built on top of a giant mountain (that used to be an island), which is almost as omnipresent as Pandora’s moon or the dozens of ocean liners suspended in the air. It’s all impressive, and I never got tired of taking a step back and marveling at how well Gearbox managed to create a world that tells so many stories without needing to say a word. 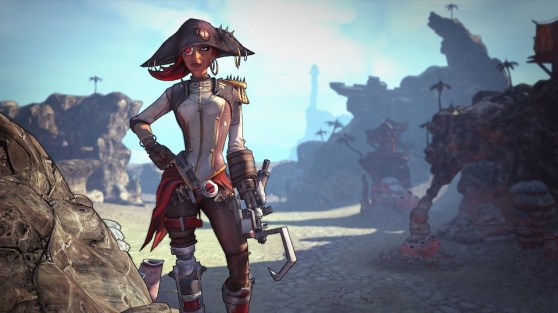 It feels like a given to say that something related to the Borderlands series is funny and well-written, but the two primary characters in the DLC, Shade and Scarlett, are consistently just that. When you first meet Shade, his assurances that everyone in Oasis is still alive is fairly funny. But as you do more and more quests for him and you meet more of his “friends,” you realize it’s less funny than it is super-creepy. And also very funny. A particularly highlight is when he sends you to find an engagement ring and then propose to a long-dead woman on his behalf. Her “response” goes pretty far in arguing in favor of Shade being the craziest inhabitant of a planet where everyone is crazy.

Scarlett is one of the more competent denizens of Pandora’s desert. She manages to maintain control of her pirate crew, her weirdo stalker, and the Sand Pirate’s Union all while keeping a straight face when she repeatedly reminds you that at no point will she stab you in the back. With her and Shade, plus a bratty teenager who hates her grandmother and a porn-obsessed robot, Pirate’s Booty features some of the funniest characters in all of Borderlands 2.

Then you’ve got the ending, which I won’t spoil here, but I will say it’s a delightfully “screw you” of an anticlimax that has a considerable amount of fun at the player’s expense.

This is just as obvious as saying it’s funny, but Pirate’s Booty provides the one thing every Borderlands fan is looking for: more Borderlands. You get loads of new content in this pack, in addition to the main and sidequests, that help toward making this all feel new. You’ll see a handful of familiar monsters (hopefully you like Stalkers and Crystalisks), and a few obvious reskins of normal humans. But the DLC’s pirate theme is thankfully not ignored when it comes to most of them. You’ll be killing a lot of generic guys with guns, sure, but when you run into new enemies like the Cursed Pirate (a skull-faced adversary that drains your hit points) or the Anchorman (unfortunately not of the “Stay classy, San Diego” variety), you’ll have to change up your usual tactics in order to survive long enough to see some of that hot new loot.

Speaking of which, this, of course, has tons of it. One of the recurring sidequests that pops up in Pirate’s Booty involves you finding hidden treasure maps that lead to some of Captain Blade’s lost equipment and diary entries. All of it is pretty powerful, but each item also has some kind of negative drawback that, if not exactly welcome, does at least reflect the way the game characterizes Blade as a bloodthirsty pirate that isn’t actually bloodthirsty at all. See that? Telling a story through loot stats. Crazy.

The new Sand Skiff is also a lot of fun. It comes in three varieties (rocket, harpoon, and buzz saw), two of which are already common in the vanilla Borderlands 2 content. The harpoon variant, however, launches an explosive spike into enemies that takes a bit of time to fire off but tends to kill things in one shot. It’s a great weapon, and it makes mowing down hordes of sandworms a lot more fun than it should be. 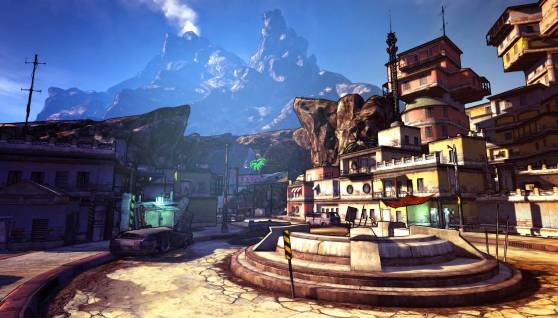 Borderlands 2 was released about a month ago, and it’s last DLC pack (containing the new Mechromancer class) came out only a week ago. It’s reasonable to assume that not everyone has finished the game proper at this point, and even those who have may have done so too recently to be sufficiently impressed by what Pirate’s Booty is offering. It’s not that anything here is bad — it’s that when you get right down to it, it really is just more Borderlands 2. Nothing less, but little more. It introduces new items, vehicles, and enemies, but few of which are going to make veteran Vault Hunters feel like they’re experiencing something that is really new.

The other part of this is that the problems that Borderlands 2 has are still problems here.  Namely, it asks you to revisit the same locations multiple times far too often. This only happens a few times in Pirate’s Booty, but since the DLC covers a smaller amount of ground as it is, the likelihood of you having just been to the place you need to go next is frustratingly high. Fortunately, this usually only crops up during the treasure-hunting sidequests. But those are sometimes irritatingly vague on their own, so it makes them considerably more unappealing when you need to fight through an area you’ve already cleared once in order to get to them.

It doesn’t raise the level cap

Of course, if you are the sort of person that has already seen everything Borderlands 2 has to offer, you’re probably hoping for something that goes beyond new loot and new monsters. Something like, say, a higher level cap. Unfortunately, at least for this DLC pack, you won’t be able to break past the existing limit. That means if you’ve already maxed out your character, you might want to hold off on Pirate’s Booty until Gearbox does raise the cap (or rather, if they raise it).

Captain Scarlett and her Pirate’s Booty offers almost everything a Borderlands 2 fan might want in their DLC, but it all ends up being a little too expected to truly achieve ground-breaking status. Thankfully, some hilarious new characters and an impressive setting hoist the add-on content up to a level that makes it hard not to recommend to anyone looking for a little bit more of that sweet, sweet loot.

Captain Scarlett and her Pirate’s Booty, a DLC pack for Borderlands 2, was released Oct. 15, 2012, for the Xbox 360, PlayStation 3, and PC. The publisher provided GamesBeat with an Xbox 360 download code for the purpose of this review.