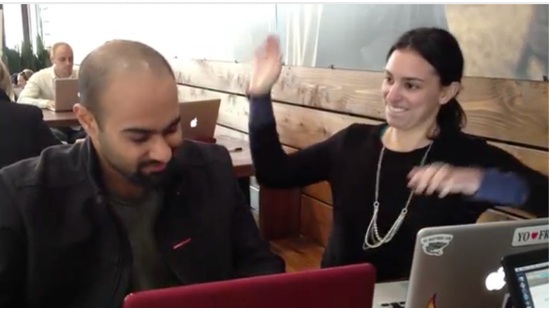 When are you most productive? Depending on your personality, you might not need alone time — you might need a team.

Humans are social animals. We aren’t designed to live and work alone. Now that the average worker’s job is to sit in front of a computer — often with no supervision — it’s no surprise that we are only productive three days each week. Having worked mostly alone, on my computer, I found that the majority of my time is spent unproductively.

So I measured my productivity, using a nifty little app called RescueTime. RescueTime sits in the background of your computer and measures the amount of time you spend on your computer and on each Website. It lets you see exactly how much time you spent hard at work on your Excel spreadsheet and exactly how much time you wasted watching episodes of The League (holy shit, go watch The League).

Nothing makes me more embarassed than seeing the amount of hours I spend wasted on Reddit and Facebook chat.

38% productive. That means that almost 19 hours of my time last week were wasted — disappeared, never to be seen again.

I figured, “This is stupid, why am I wasting this time doing nothing? When I have a boss or someone of authority watching me, I always get my work done. How can I simulate the authority figure?”

Naturally, I believe that an authority figure should have real authority. And I am a big fan of Slap Bets. Put those together — and I realized I needed someone to make me work, with permission to slap me in the whenever I cheated.

So I went on Craigslist, put up an advertisement, and waited to see if anyone would bite.

Title:(domestic gigs) Slap me if I get off task…

I’m looking for someone who can work next to me at a defined location (my house or a mission cafe) and will make sure to watch what is happening on my screen. When I am wasting time, you’ll have to yell at me or if need be, slap me.

You can do your own work at the same time. Looking for help asap, in mission, near 16th mission BART.

Compensation: $8 / hour, and you can do your own work from your computer at the same time.

Within minutes, my inbox began blowing up. I received 20 emails in less than an hour from people who loved the idea. I read through them, found one that stood out, and hired her to meet me at a cafe the day after.

The next day, at 9am, I found Kara sitting and waiting for me. Pulling up a seat, I gave her the basic instructions: She would monitor me for the next few hours and make sure that I was staying on task. I gave her a list of action items that I needed to accomplish and made her promise to force me to stay on task.

Yep, a few times she definitely had to slap me. See the video below. (San Francisco: the city of weirdos. It’s got such a collection of nerds, hipsters, millionaires, crack addicts, etc. that no one even notices when a random blogger gets repeatedly slapped in the face at a coffee shop.)

The results were astounding. Below, you’ll see my graph of average productivity during the experiment.

My average productivity runs around 35-40% on most days. When Kara sat next to me, my productivity skyrocketed to 98%

But not only did my productivity skyrocket, the quality of the work I did skyrocketed as well. Kara forced me to complete my first guest post, The Sex Scandal Technique. She also helped me push through an application for a secret project that I applied to — an application that won, out of hundreds of applicants.

An Analysis: Why Hiring a Slapper works

Without a doubt, this experiment was a success. My biggest takeaway from the experiment is this: If you add a social element to the work that you do, you will become more productive

Honestly, the fear of the slap wasn’t the productivity driver. That just made it fun. The real reason why Kara made me more productive is because she added a social element to writing. When I was drafting the outline, I asked for her feedback. When I couldn’t think of the right way to phrase a sentence, she was there to help. Instead of it being a chore, Kara made it fun to write.

Here are the major reasons why hiring someone on Craigslist to watch me work improved my productivity and quality.

1) Someone else, besides me, knew exactly what I want to accomplish that day. In many jobs, you might have a team or a manager who knows what you are supposed to do. My work, however, doesn’t give me the benefit of a boss that plans my todo list. Kara became my makeshift boss, knowing what I needed to get done, and forcing me to do it.

2) Kara pushed me through the cheese monster. I take the phrase “Cheese Monster” from ZeFrank’s awesome video – he defines the cheese monster as the “feeling in your stomach, when you get a ball of energy that tells you to get up and go to the refrigerator and get a cheese sandwich…but the cheese monster will never be satisfied by cheddar but only the cheese of accomplishment.” In those moments where I hit a rough spot and wanted to take a walk or check Facebook, Kara proved to be the most valuable. She made me push through the difficult parts.

3) I finally had someone to bounce ideas off of. Kara helped polish my sentences, and told me if my ideas made sense. That sort of clarity is priceless.

4) The Slap Challenge added a playful, silly element to working. It gave me a nonconventional reminder of what I was supposed to be doing — and it ended up being something I didn’t want to happen again.

5) Having another pair of eyes to go over my content drastically improved the quality of my work. I knew Kara would be reading it, immediately, so I wanted to make sure that the logic was clear, and there were no spelling or grammar mistakes.

If you can turn your to-do list into a game — especially a social one, a fun one — it won’t be work anymore. It will be fun. All it takes is building a system.

If you’ve ever done something similar — created a game to finish a task, hired someone to help you get things done, etc, let me know in the comments.

A version of this story originally appeared on Maneesh’s blog.

Maneesh Sethi writes Hack the System, a website that teaches readers how to travel the world for free, get into the most exclusive parties, lose 23 lbs in 28 days, and achieve their wildest goals — all by taking that first step. Since 2007, he’s lived in nine countries, learned five languages, and has helped hundreds of people break free of their jobs and travel the world. You can follow him on Twitter.