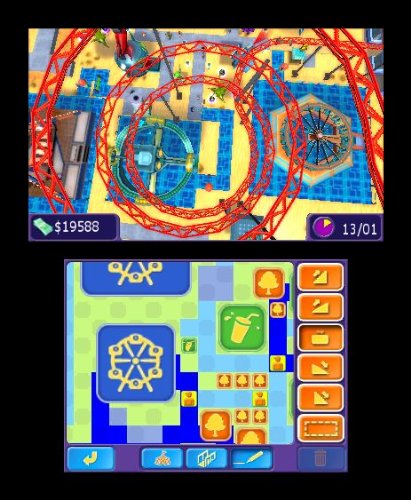 I hate roller coasters. I don’t like the sensation of falling. I think my body is happier staying level with the ground and not being flipped around while uncomfortably strapped into a steel train.

Oddly, I love designing thrill rides. Well, at least in RollerCoaster Tycoon (and specifically the original isometric installments of the park-building simulator for the PC).

And now the franchise is making a comeback on the Nintendo 3DS on Oct. 15. This was great news to me. But now that I’ve actually played RollerCoaster Tycoon 3D, I wish this series had remained a happy memory.

After building a roller coaster, you can ride it from a first-person perspective. You can also use the 3DS’s gyroscope controls to look around the rest of your park during the ride. This is mildly neat. 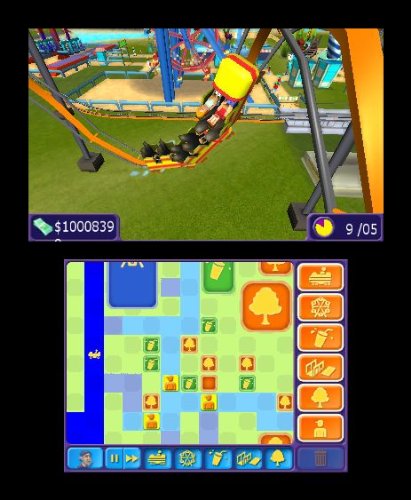 It’s less of a game than the original

It’s sad when the newest installment in a series has significantly fewer options and features than the original, which came out all the way back in 1999. Some of the omissions are beyond baffling. You can’t name your rides or adjust their color schemes. Height markers, which you use to see how tall your tracks are (and are incredibly important, since you need to make sure you’re not building your coasters higher than the initial drops) are mysteriously absent.

Want to click on a random visitor at your park and see what his favorite ride is? Too bad. Research and development for new rides and scenery? Gone. Oh, and this one kills me: You can’t modify the terrain. That means no raising or lowering the ground, severely limiting your creativity when you design your park. This also means your paths and coasters can’t go under ground or through tunnels.

A lot of ride types are missing, especially water-themed attractions, so you can’t build log flumes. Because, you know, no amusement park ever has one of those (except for every one ever).

Of course, it’s possible that some of these features are in the game, but I just can’t find them because of the terrible, unintuitive interface. The game displays all of your building options on the bottom screen, often with unclear icons. To access banked turns for your track, you click on a dashed circle. I don’t see the connection.

Building walkways for your guests is an awkward endeavor. You can turn the direction of the path 90 degrees, but only in one direction. Why not give the option to rotate in both directions? You can also lay down roads by drawing on the bottom screen with your stylus, but this only works about half of the time.

One thing developer n-Space did add to the series is a story mode. Sadly, it’s a bad addition. The story is little more than a young kid exchanging unfunny insults with a retired coaster builder as the latter sets the former on the path to theme park fame. But even if the story was good, who would care? This is a lot of wasted effort to add context to creating rides.

You know what I would have made the story? Here’s an empty area. Now build a park. That’s all you need. Maybe they could have added one of the handful of missing features I listed above instead of bothering with all this dialogue and nonsense. 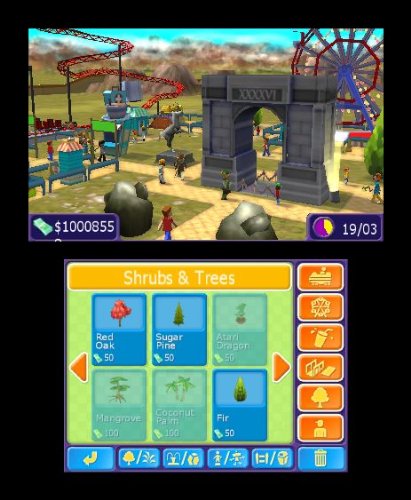 I can’t find the point of RollerCoaster Tycoon 3D. Why bother making this game if it can’t at least match its predecessors? This is one instance where I would have preferred a port instead of a new installment. You’ll have more fun a hundred times over playing the PC classics instead of this portable slop. I know certainly wish I was.

In fact, if not for the graphics, I bet that if I presented the original and this version to a complete stranger to the franchise, they would guess the former was the newer game. Again, the one that came out in 19-freaking-99.

But even if the series had never existed, and this was hypothetically the first game in a new franchise, it would still be a boring mess. This coaster deserves to rust.

RollerCoaster Tycoon 3D released for the Nintendo 3DS on Oct. 16, 2012. The publisher provided GamesBeat with a copy of the game for the purpose of this review.