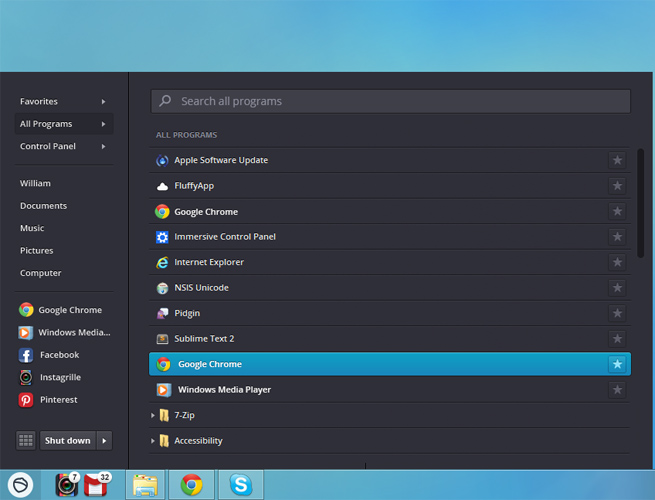 One of the biggest changes Windows 8 will bring to users when it is released next week is the removal of the Start menu on the desktop. Many Windows users will find it jarring.

That said, SweetLabs‘ new Pokki app for Windows 8 offers its own version of the Start menu for users who want to check out the new the things Microsoft’s latest OS offers but still want a handy menu on the desktop.

“This is a bridge for users who want to upgrade and still access everything on their computers easily,” SweetLabs co-founder Chester Ng told VentureBeat. “We want users to be able to do their everyday tasks again.”

As you can see in the photo above, the Pokki app for Windows 8 emulates the Start menu’s functions and makes it easy to search the computer, launch programs, change settings, and shut down the PC. All of these things are just a tad more complicated using Windows 8, but Pokki makes it possible to embrace the old way of doing things.

On top of adding Start menu functionality, Pokki’s menu includes a notification center, an app store for finding new apps, and a home-screen-like section for launching apps, files, folders, and more. One other cool thing: Pokki can change Windows 8 so it boots to the desktop so you don’t even have to see the Start screen upon booting up. (However, Microsoft could issue a patch to block this.)

SweetLabs isn’t the only company to add a Start-menu-like function — Samsung has added the S Launcher widget to its slick lineup of Windows 8 PCs.

While Samsung will help its users with that widget, Pokki will be available for the other Windows 8 users and won’t cost a cent to download. Ng said that SweetLabs wants Pokki to develop a substantial user base before it monetizes the product with an app store. Thankfully, SweetLabs already has traction with more than 1 million PC users hooked on Pokki.

Check out the video below to see Chris Pirillo ask Seattle residents what they think of Windows 8. Much like Pirillo’s video with his father or the video with my father, everyday folks aren’t quite sure what to think about Windows 8.