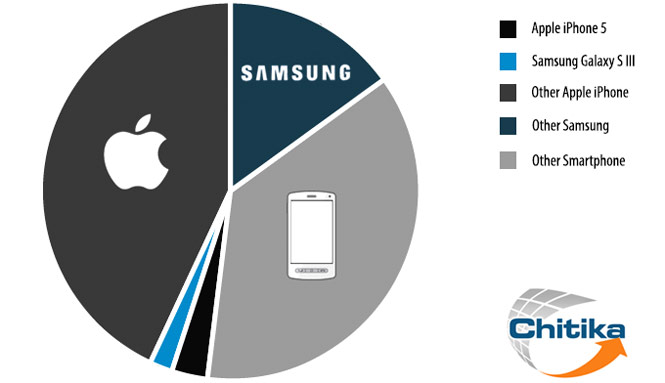 In a major turn-around, Android smartphones now account for a majority of mobile web traffic in the U.S and Canada, with close to a 51 percent share. That’s a massive change from May of this very year, when Apple owned 72 percent of smartphone traffic, compared to only 26 percent for all Android phones.

The results are according to a new study by ad network Chitika.

Apple accounts for 46 percent of all mobile phone traffic in the U.S and Canada, and bitter rival Samsung’s phones add up to 17 percent. Just one month after its introduction, the iPhone 5 accounts for three percent of North American mobile web traffic single, er, phonedly, compared to the Galaxy S III’s 2 percent. (The iPhone 5 surpassed the Galaxy S III in just three weeks, as we reported last week.)

The more interesting information is in the platform numbers, however.

BlackBerry is still holding on to 2 percent of web traffic with its fingernails, and Windows Phone is a tiny little thin slice — but probably poised for growth — at just 1 percent. But getting the Android numbers out requires a bit of digging. 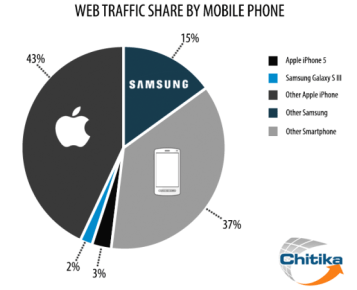 The 43 percent slice in the chart includes all of Apple’s other phones: the 4, 4S, iPhone 3s, and all the way back to the very first iPhone, released in 2007. (Amazingly, some of them are still in use.)

The 15 percent Samsung chunk includes all of its smartphones, which are almost all Android-based.

So the really interesting part of the graph is the big 37 percent terra incognita slice labeled “Other Smartphone.”

When I asked one of Chitika’s data engineers, Andrew Waber, about that group of phones, he ran some additional numbers, slicing the data in a different way.

It turns out that non-Samsung Android is 34 percent of North American mobile web traffic.

And since Windows Phone is only 1 percent total of the market and Samsung sells almost exclusively Android-based smartphones in the U.S., an overwhelming majority of its 15 percent in the graph can be added to the 34 percent.

Which means that 34 percent non-Samsung Android, plus 15 percent non-Galaxy-S III Samsung, plus 2percent Galaxy S III, adds up to 51 percent … giving Android a total share of 51 percent. Or, if not exactly 51, some number between 50 and 51.

In other words, a majority for Android.

I talked to Waber about my mathematical assumptions. He verified that I’m not inventing the numbers, but he did caution that the numbers do fluctuate.

“What we’ve seen is it’s near even, but sometimes swing just lightly in majority of Android or iPhone. But this is not inconsistent with what we’re seeing too.”

In other words, we are right at the tipping point between majority iPhone and majority Android web traffic. That’s big news, and while it was likely to come for some time given the fact that Android out-sells iOS, it’s a milestone event.

The question now becomes: How high will it go?