Two months into testing a program for promoting sponsored applications in Facebook’s iOS and Android applications, the social network has opened the service to all developers. 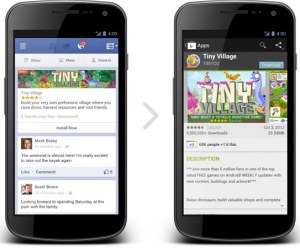 The ads appear in the stream with a subtle “sponsored” label (as pictured right), and allow Facebook members to click through to Apple’s App Store or the Google Play marketplace to purchase or download a promoted app.

“With these new ads, mobile apps and games of all sizes across any category can reach the right audience, at scale,” Facebook engineer Vijaye Raji wrote in a blog post Wednesday. “TinyCo saw 50% higher CTRs and significantly higher conversion rates compared to their current mobile channels, as well as a significant increase in player engagement.”

Now that the units are openly available, they will either allow the social network to address its mobile monetization issues or alienate members who’ve not yet noticed a stream of ads cluttering their mobile News Feeds. The task at hand is especially important now that nearly 20 percent of Facebook’s mobile users skip the website altogether. Facebook has 600 million monthly active mobile users.

Facebook today also promised developers substantial improvements to the ad units in the coming months. The ability for end users to install apps without leaving Facebook’s app, the option to customize the ad based on audience type, and the choice to show ads to people who have not installed an app were all cited as examples.