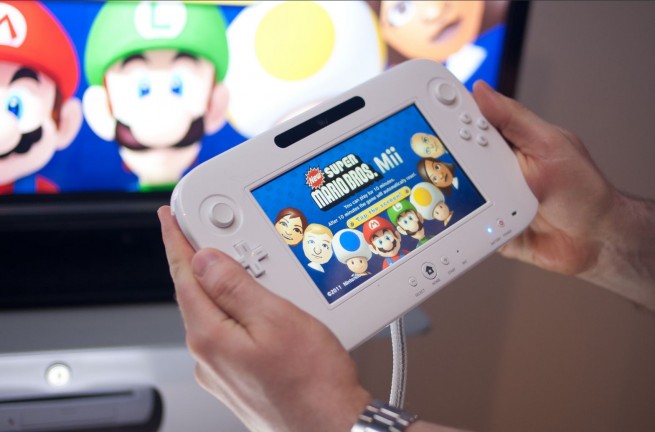 If you’ve heard the Wii U name before but don’t quite know what it’s all about, you’re in the right place. Video game publisher Nintendo has a new home console on the way, and we’re going to run down everything you need to know about it.

As the Wii U name implicates, the new hardware is the followup to Nintendo’s popular home console, the Wii. But this name may cause some confusion, so let’s clear a few things up right away:

That should clear up some common misconceptions. If you’re still a bit shaky on exactly what the Wii U is, that’s OK. We’re going to do our best to explain. Here’s the basic answers to the frequently asked questions: 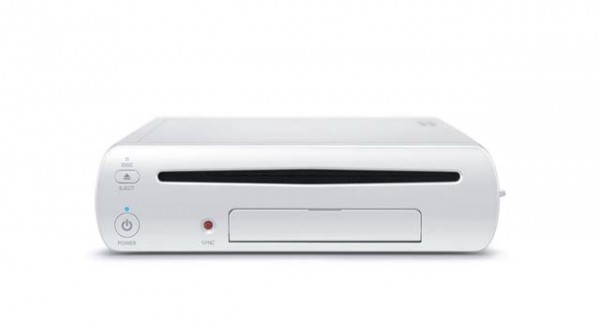 The Wii U is entirely separate from the Wii. That has its pros and cons.

This means that your Wii, if you have one, is now obsolete. You can’t just go out and buy the Wii U’s interesting GamePad controller and have all of the functionality of the new system without buying a Wii U. If you want those Wii U games, you’ll have to spend at least $299.99 for the Basic system and then the cost of some games. The good news it that all of your old Wii games will still work on this new hardware. Also, a lot of new Wii U software is compatible with the Wii Remote as long as it’s using the MotionPlus dongle (or has MotionPlus built-in).

The plus side of a new system means the visuals are a significant leap over the Wii. The Wii U is Nintendo’s first fully high-definition console. It is capable of producing visuals at least on par with the Xbox 360 and PlayStation 3. If you want a Mario game that takes full advantage of your 1080p HD television, the Wii U is the only way to make that possible.

The GamePad controller is the next big upgrade you’ll find in the Wii U. Nintendo’s advertising campaign is focusing on this new handheld device with a screen that connects wirelessly to a console. It’s easy to look at that and think “Why didn’t Nintendo just release that for the Wii?” Well, the Wii simply doesn’t have the juice to power what Nintendo plans to do with the GamePad.

We’ll break down the controller in detail in the next section, but the simple explanation is this: The Wii U can display one player’s in-game view on the GamePad and multiple other views on the television. That sort of video output requires a level of graphics processing that the Wii cannot reproduce.

If you have any WiiWare or Virtual Console games on your original Wii, those are transferable to the Wii U. The process requires both systems to connect to the Internet, so Nintendo can verify the content, and then you take an SD card from the Wii, pop it in your Wii U, and that’s it. It’s a similar process to moving downloadable 3DS games to a 3DS XL.

The Wii U console comes in two varieties: a white basic system with 8GBs of capacity for $299.99 or a black deluxe version with 32GBs of storage and a game for $349.99.

Here’s a list of each version with the included bits and pieces:

This is it. If motion controls were the big draw for the Wii, then Nintendo expects this controller with a touchscreen in the middle to reproduce that success. We’ll explain all the things the GamePad can do for games, but let’s run down the specifications first:

If you’re confused by that list, don’t worry. We’ll explain how Nintendo and other developers plan to use all that junk.

Basically, the GamePad operates as both a controller for the game on your TV screen and as a tablet for observing and maintaining supplemental information in said game. For example, in an adventure titles, gamers can now tap on the screen to select between different weapons and tools.

But this a simple explanation of its capabilities. Nintendo built in some advanced sensing equipment that allows the tablet screen to directly interact with the television display.

In Nintendo Land, the game that comes with the Deluxe console set, a particular minigame allows players to hold their GamePad vertically and throw ninja stars by swiping on the screen. Those ninja stars then appear on the television exactly where the player aimed them.

Other games will allow players to hold the controller’s touchscreen up in front of the television to get an augmented perspective of the TV screen. Let’s say smoke fills your field of view on the set — hold up your GamePad and use it as infrared goggles to see your enemies.

Another oft-touted feature is the Wii U’s capability to play full console games directly on the GamePad LCD. If you are in a household where multiple people are vying for the television, you can quickly migrate a game like Call of Duty: Black Ops II from the television to the controller with a simultaneous press of the + and – buttons.

Since the Wii U will support the GamePad and the Wii’s old Wii MotionPlus controllers (along with new controllers like the Wii U Pro Controller), developers are designing their early Wii U games around an idea called “asymmetrical multiplayer.”

Asymmetrical multiplayer is when two or more users are playing one game and one of those players has more in-game abilities than the others. For example, Ubisoft’s Rayman Legends will have one person on the GamePad controlling a special touchscreen character who can interact with the environment that the other players are running around in.

You can see in the video above (starting around the three-minute mark) that the GamePad player was changing the world and allowing the other players to get more points as they traversed the platforms.

Nintendo wants this type of gameplay at the center of the Wii U experience, and it’s the GamePad controller that makes it possible.

This device also has a microphone and front-facing camera for video chatting and in-game communication.

It has a lot of features, but the GamePad will also work fine as a controller for standard games. It may look some chimeric monster built from leftover Kindle Fire and Xbox 360 controller parts, but our hands-on time with the device suggest it will be perfectly capable and comfortable for games like Assassin’s Creed II.

The controller as a TV remote

The GamePad has an infrared transceiver, so it can work as a universal television remote. That TV button on the bottom right will bring up television controls so that players can quickly turn down the TV’s audio if it’s too loud. The TV functions of the GamePad will expand beyond that, though. Even when the Wii U console is off, the GamePad can still control the TV.

Thanks to a service called Nintendo TVii, you may actually want to use this device as your primary remote.

Nintendo TVii allows your Wii U GamePad to hook into your Hulu, Netflix, and Amazon Instant Video accounts. TVii can also interact with your Tivo or other personal digital-video recorders. If you’re looking for something in particular, searching for it on the GamePad will tell you if the show, movie, or sporting event is on one of your services or even it’s playing on television currently. If it is, the GamePad will tune your TV to that channel with the touch of a button. TVii also includes a suite of interactivity features for quickly sharing moments to social-networking sites like Twitter. 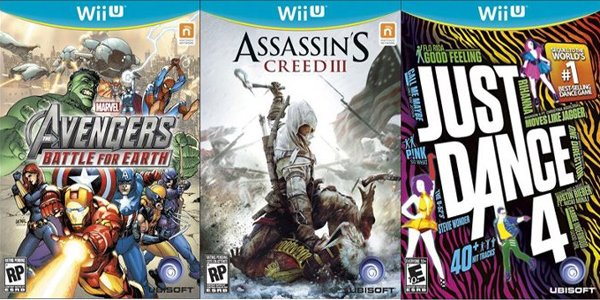 Like any home console, the Wii U will have a lot of games. We’re not going to list them all here, but at the bottom of this section we’ve included a YouTube video that runs through many of the system’s biggest releases.

Instead, let’s talk about the types of games that you’ll be able to get on the Wii U, since that’ll be quite a bit different than the Wii.

On the Wii, developers couldn’t bring over the games they made for the Xbox 360 and PlayStation 3. Most developers had to rework their games for the Wii’s less powerful hardware and motion controlls. That will no longer necessarily be the case on the Wii U.

The Wii U now has the power and the controller necessary to play ports of games like Assassin’s Creed III and Darksiders II. On top of this, it’ll also support any developer who wants to build something new that takes advantage of the tablet controller.

Of course, you’ll also be able to get and play motion games like Just Dance 4 since this console still supports the Wii MotionPlus controller.

Theoretically, the Wii U should be the best of all worlds. It could have the best multiplatform games (Call of Duty: Black Ops II), fun motion-control games (Just Dance 4), and new kinds of GamePad games (Nintendo Land.)

How to buy a Wii U 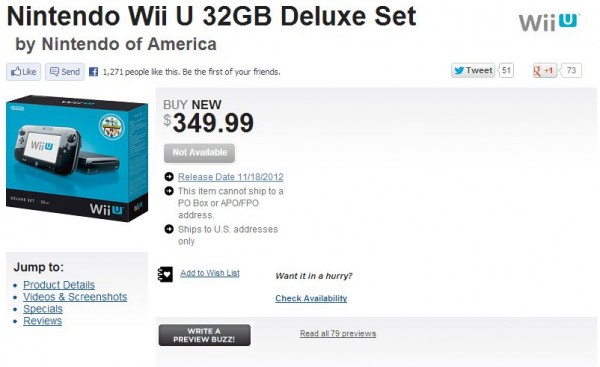 OK, well, that’s going to be difficult, but not impossible.

Right now, the system is sold out on retailer GameStop‘s website. Some independent vendors on Amazon are selling the console for as much as $1,000. Between now and its launch on Nov. 18, the hardware may become available on different websites, but it’ll likely sellout as fast as it appears.

Our suggestion, and it’s only that, is to use Walmart’s layaway service to preorder the system. Walmart will allow you to reserve your Wii U for launch day if you put down 10 percent in their layaway department between now and then. You’ll probably still have to wait in line on Nov. 18, but you’ll have a better chance to get one than someone who didn’t reserve it.

Other retailers, like Toys R Us, Target, and Best Buy are all out of preorders as well. You might be able to get in line on the night of Nov. 17 for a chance to pick one at midnight at those locations and others (Fry’s, Kmart, Meijer’s), but by the afternoon on Nov. 18, customers will have picked over most stores.

So … should you get one?

We can’t really answer that for you. We’ll have a review of the system up around the time of its release, but everyone’s different. If the idea of Nintendo Land’s asymmetrical gameplay sounds appealing to you, it could be worth it. If you desperately want HD Nintendo games, you’ll likely get your money’s worth.

Oddly, despite the fact that we’re less than a month away from release, we still don’t know everything about this device. It’s online service remains something of a mystery. It will have some kind of service that’ll allow you to leave comments in your games that other players can read once they reach that point, but we don’t know much else.

If you’re on the fence, hold off. It’s going to be difficult to buy one anyhow. You might as well wait for the reviews.