5. Engineers are more valuable than scientists

Scientists determine your rate of tech progression, and while you don’t want to fall too far behind, you won’t face any penalties for learning slowly. Sure, you do want to discover better weapons and armors for your soldiers, but smart play in the squad-level skirmishes can go a long way.

Engineers, on the other hand, are a bottleneck to so many aspects of base progression. You need certain numbers of them to construct facilities at all, and each successive room of the same type requires more than the last. The more engineers you have, the less manufacturable items (such as Beam Weapons, Interceptors, and, yes, Satellites!) and Foundry research projects cost. You can never have enough engineers, and the more you have, the more you can do within your monthly budget. 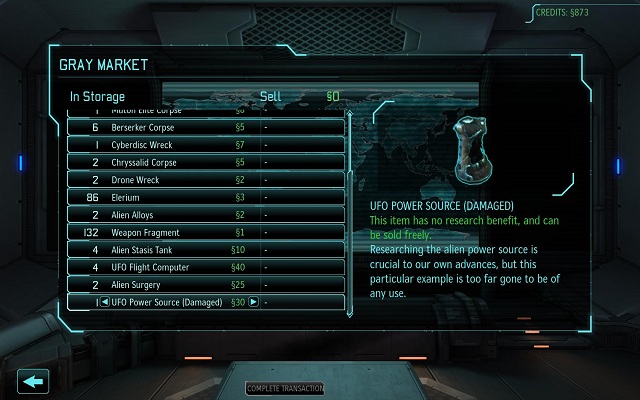 6. Clean out your closet frequently

You don’t quite have a black market in Enemy Unknown as you did in the other X-Com games. For instance, you can’t manufacture items at your discretion for the sole purpose of selling them to unknown buyers. But a “Gray Market” does exist, where you can sell alien artifacts to the 16 Council-member nations.

Damaged UFO Power Sources or Flight Computers are useless to your research department, so sell those immediately for easy cash. You should also sell extraneous items, like Alien Entertainment, right away. The game will clearly indicate what is OK to sell without any consequences.

Never, under any circumstances, sell Alien Alloys, some corpses, or Elerium. You’ll need each of these as necessary materials for a lot of manufacturable weapons, armors, and items in the game (especially Alloys!). You don’t want to be left short when you need to make those fancy new plasma weapons or flying armors! You can’t construct any of these on your own, either; you have to salvage them from missions (particularly UFO raids).

If you’re in a pinch, though — maybe your soldiers really need that Carapace Armor as soon as possible — sell multiples of unresearched, high-priced items and keep one for your scientists. But make sure you have all the required build materials first.

You’ll also receive requests from member nations for specific manufacturable items in exchange for cash or sometimes a few scientists or engineers. Always try to meet these requests if you can — the return on investment is always in your favor. 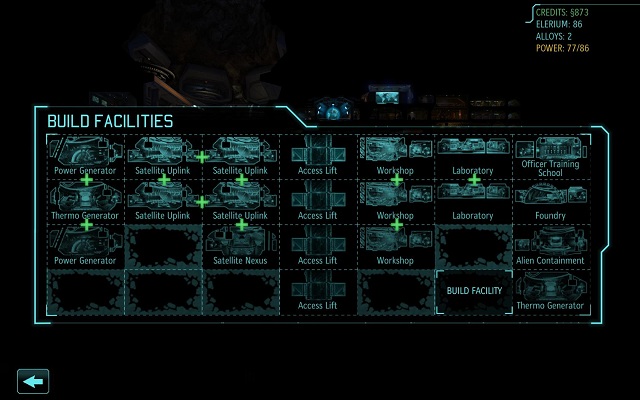 As I already mentioned with Uplinks, most buildings provide additional benefits when you place multiples of the same or similar type next to one another. For instance, Linked labs decrease the time required for research and workshops constructed together decrease build costs. Knowing this, you should always situate your base with adjacency in mind. Setting up columns of the same type of facility is the easiest approach.

Your 7-by-4 vertical plot will also have randomly located steam vents where you can place Thermo Generators, which provide much more power than regular Generators. Without power, you cannot construct new facilities, so plan ahead to have your Thermo Generators up and running quickly.

Some buildings — such as the Officer Training School, Foundry, and Alien Containment — do not confer any bonus simply because you won’t ever need more than one. When placing these, think about how their locations might disrupt a potential adjacency bonus.

Early on, you won’t have the studier Firestorms to deal with large-class UFOs, and even in the late game, a Battleship might appear over a country where you haven’t stationed any. These power-ups can really increase your fragile Interceptors’ chances against the biggest spaceships.

You can only use one of each item per engagement, so carefully make your selections as the dogfight unfolds. Use Track if you have short-range armaments so you can start shooting back sooner. Use Aim and Dodge to score easy hits and keep your plane in the sky longer.

These power-ups are also one reason why you don’t want to sell certain alien corpses — you’ll need some as materials to construct them back at the base.

Follow these eight tips and you’ll turn a bumbling bureaucracy into an efficient machine capable of meeting the extraterrestrial threat on its own terms. But while you’re under no hard time constraints, you can’t dillydally, either. The invasion will progress with larger, more advanced UFOs and deadlier alien types regardless of what you do. Remember to keep watch of the Doom Tracker: If eight countries withdraw from the XCOM project, the world will pull the plug permanently.

Game over, man. Game over.