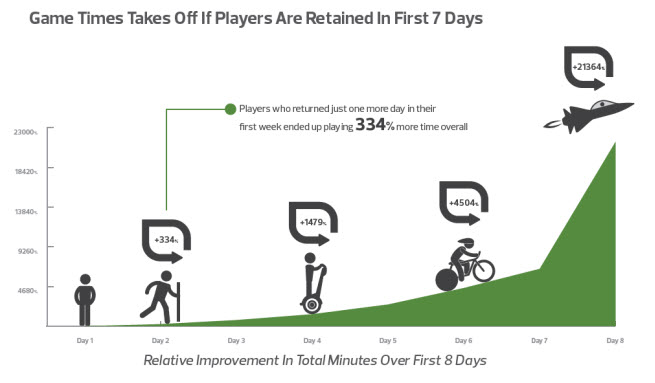 Online games, such as social games played on Facebook, can generate rich statistics that make developers very happy. Or it can make them cry. 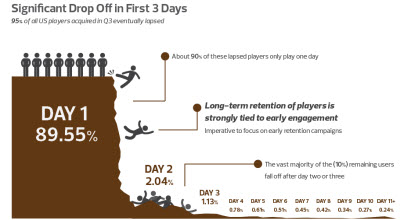 Consider the fact that 85 percent of all new U.S. players do not return to a social game after the first day of playing it. That’s one of the findings of the Playnomics Q3 2012 Player Engagement study. Playnomics has built its PlayRM customer relationship management platform to give game developers and publishers a real analytics dashboard so that they can manage relationships with customers the way that big enterprises do.

This quarter, Playnomics mined its results from 30 million players and found that U.S. women quit playing games (an occurrence known as churn) at a slightly higher rate than males. The most game time is played on Saturday, but people tend to play longer on Mondays and Tuesdays. And players are most likely to try a new game for the first time on Saturdays.

Other data: About 95 percent of all U.S. players acquired in the third quarter were inactive by the end of the quarter. Nonchurn players play twice as long on their first day compared to churners. In the U.S., Oregon has the most engaged players while the Southeast has the least engaged.

All of this data is very useful for game companies. San Francisco-based Playnomics assigns an Engagement Score to each player. This is akin to a credit score that tells publishers whether a player is likely to spend money and on what. The average Engagement Score per active user from July 1 to September 30 was 25.4. On average, the score in North America was 26.5 in September; 41.4 in the Middle East/North Africa; 32.3 in Latin America; 30.3 in Europe; and 22.8 in Asia-Pacific.

Games take off if the players last more than the first seven days. Players who return one day more after their first day will play 334 percent more than average. Those who play for seven days will log 21,364 percent more playtime.

“We pull and analyze data from millions of players worldwide, across all the online social games in our PlayRM platform, to determine results with important, applicable implications for developers,” said Chethan Ramachandran, the chief executive officer of Playnomics. “When do players return to your game, and how frequently? What are the triggers for player returns? Which are most likely to share your games with their friends? Why do they come back, and how often? These questions are crucial for user retention in today’s online marketplace, and our tools make it possible for developers to answer them — easily, succinctly, once and for all.”