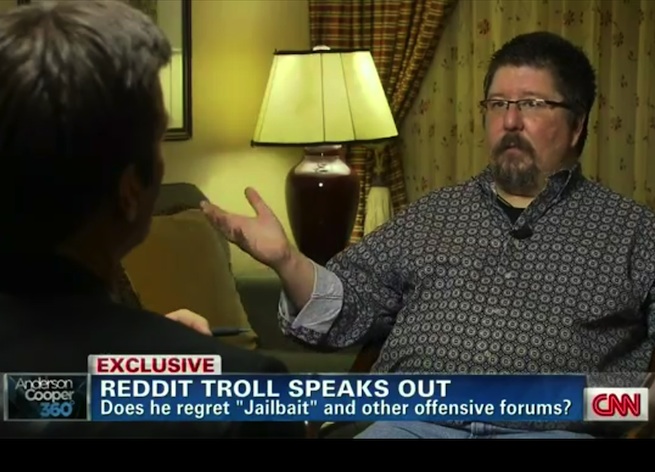 Brutsch is responsible for creating over 600 “subreddits” or sub-forums based on a specific subject, including many that were morally questionable. For instance, he created and moderated the Jailbait subreddit, devoted to sexually suggestive photos of underage girls as well as subreddits for pictures of dead children, rape, and many others. Brutch is legendary on Reddit for his grand displays of trolling — saying/submitting really awful things to get a reaction out of people.

“(Now) that the curtain’s been pulled back, and everyone can see the puppeteer … I have come around, over the last few months, to understand that some of these things can be harmful to other people,” Brutsch told 360’s David Griffin during the interview.

Brutsch is a smart guy (and I know this because he came up with several good video game metaphors during the interview for why people care about earning Reddit’s Karma points), so I’m going to assume he’s actually referring to the last few days rather than months. Since being outed as ViolentAcrez last Friday, he’s been fired from his job, lost his medical insurance, can no longer support his family, and is alienated from his local community. His life has fallen apart, and I’m sure he now realizes that the particular kind of free speech he peddled can come at a great cost.

“Well, I am to some degree apologizing for what I did,” he said. “I was playing to an audience of college kids. Two years ago, when all of this was at its height, the audience was appreciative and supportive of the sort of gallows humor that I put out there.”

Some of Brutsch’s comments seemed to shift the blame for his actions to not only immature college kids, but also Reddit staff, who he claimed “encouraged and rewarded  this type of behavior.” He was quick to pull out his Reddit alien trophy and mention the “pimp hat” given to him by Reddit employees for his contributions to the community — awards given to Brutsch because he managed to keep the underbelly of Reddit free of illegal content as a moderator.

Clearly, Brutsch feels burned by the site and its staff, which is evident from the many comments he’s left in the past few days under his “clean” Reddit account. Since the interview aired, Brutsch has come out as saying it was “a big mistake.”

CNN has posted the full interview online. Let us know what you think of Brutsch’s explanation in the comment section below.