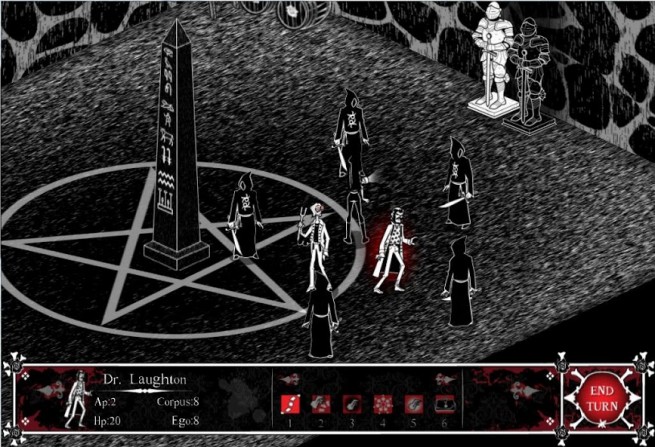 Earlier today we reported that the Kickstarter game Haunts: The Manse Macabre is in trouble despite a successful Kickstarter campaign.

The turn-based horror title’s lead director, Rick Dakan, asked fans to contribute $25,000 through the crowdfunding website. The Kickstarter finished with $28,000 in funding, which went toward finishing the game. Yesterday, Dakan updated the game’s blog to announce that all production had stopped since both of the developer’s programmers have moved on to other projects.

“I felt a very great personal commitment to the strangers who had given me money,” Dakan said. “So it was a lot of dread.”

The designer, who developed the gameplay structure and world of Haunts, has known since Friday, October 12 that he was going to have to tell the Kickstarter backers he wasn’t making any progress on the product they invested in.

“I was holding out hope until the end that we could get it into shape so that we could do a closed beta and get it out to the backers who had given the money to be in the beta,” Dakan told GamesBeat. “It just wasn’t. It just isn’t.”

Dakan told us that Haunts is essentially finished, but it’s the “finickiest” thing. Before his lead programmer John Wills left, he implemented all of the game’s systems but didn’t have time to find and eliminate the numerous glitches. Dakan thinks that if the original team was still intact, they could get it into beta-test shape with fewer than 150 hours of work. Being so close to a milestone like that, Dakan didn’t want to announce the game’s problems without also providing some good news.

“I had this last Hail Mary pass,” he said. “My friends at Blue Mammoth had just signed a deal with new partners. They’re expanding their operations and maybe [Haunts] is something they would be interested in.”

That deal is far from confirmed. Blue Mammoth, which has a Facebook game called Dungeon Blitz, is going to meet with Dakan on Monday.

“It’s harder to bring bad news to a bunch of nice people than it is to bring it to one or two investors,” he said. “I definitely felt that dread about how people are going to react, but in retrospect it’s gone really well and everyone’s been really supportive.” And maybe it’s not the type of support you’d get from one or two investors.

Dakan made it clear that even though he was still trying to get the game out to people, he would refund anyone who asked for their Kickstarter money back.

So far? Only two people have made that request for a total of $30.

“When I posted that [I would refund people], I anticipated that I would have to dig into retirement funds and have to shell out $20,000,” he said. “A lot more have taken the time to comment or email me that they don’t want that. That they’re sticking with it.”

Dakan says he feels better than he has in weeks. He no longer expects to make any money from this project, and his only focus is to get the game out to the people who funded it. He’ll give the monetary rights to anyone willing to finish the game, he said.

“I feel every confidence that we’ll eventually get something out that is cool.”

As for Kickstarter, this situation hasn’t soured the game creator on the crowdfunding resource. If he could do it over again, Dakan says, he would’ve held off until he’d found a developer who could see the game through to the end.

“We needed a lead programmer who was coming into it with a startup mentality,” he said. “John [Wills] was always going to leave. He ended up staying on a bit longer than originally anticipated, but he couldn’t treat [this project] like a startup.

“To have a successful tiny startup like this, everyone has to be in it in startup mode. It’s just a different mode of life.”

As an industry, we’ve been sitting back and watching the Kickstarter experiment. We’ve waited for the bottom to fall out to see how companies and gamers react. At least in this circumstance, the developer responded with transparency and the fans responded with understanding. One likely led to the other. Dakan called his experience a cautionary tale. One that should inform Kickstarter backers about the risks of supporting projects. It’s probably a better lesson for developers to learn: If you’re Kickstarter goes bad, be open and honest and your backers may be very understanding.