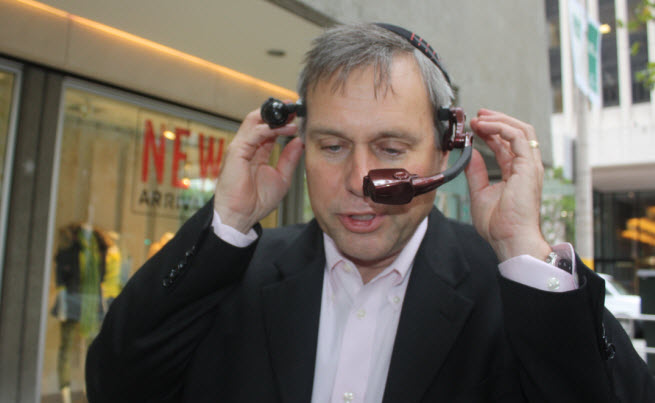 Motorola Solutions is showing off today a gee-whiz mobile computer that you can attach to your head and operate with voice commands. 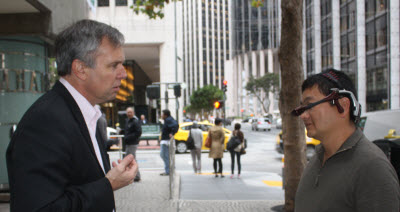 The HC1 headset computer looks bulky and cumbersome now, but it’s just a demonstration of what can come. The headset is one more example of “wearable computing” that is starting to become more functional and practical as the cost of computing falls.

You could think of it as a Windows-based variation on a theme that is similar in concept to Google Glass. Aimed at the enterprise, the HC1 is the first in a new class of Motorola Solutions hands-free enterprise computers that use voice recognition, head gestures, and video streaming.

A firefighter could use it to identify toxic chemicals or building blueprints during a fire. It’s best for use in harsh environments and remote locations, where pulling out a laptop isn’t practical. Paul Steinberg (pictured above), chief technology officer at Motorola Solutions, said in an interview with GamesBeat that the computer could be used in fields such as defense, utilities, telecommunications, aerospace, and aviation markets.

I used the computer on my head (pictured right) and issued voice commands, saying words to drill down on menus and retrieve information. You can use it to play videos, view pictures, or access records. A field technician repairing a car could use it to access repair manuals. That, in turn, could improve inspections, reduce labor rates, increase safety, and make for better repairs. Looking through the display is like viewing a 15-inch laptop screen.

The headset can connect via WiFi, Bluetooth, or mobile hot spot. You can use it to make voice calls and use navigation data.

The headset pictured is a demonstration unit and isn’t the final version. It was built in collaboration with Kopin, which makes optical micro-displays, for customer and partner trials. Andrew Cook, senior vice president at Areva, said, “In the highly demanding and regulated nuclear energy industry, innovation is essential in meeting ever-increasing standards for safety and operational performance for our utility customers. With the Entervise Remote Expert application running on Motorola’s HC1 headset computer, we can perform independent quality oversight at nuclear power plants without requiring a second person to enter restricted areas.”