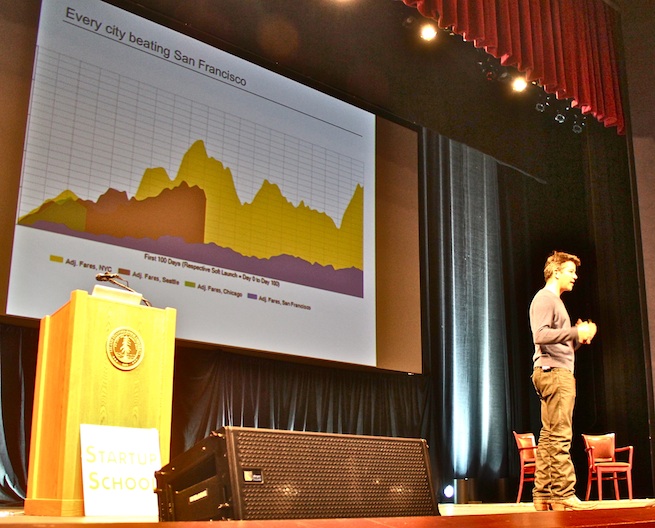 STANFORD, CA: With the highly public failure of its New York taxi beta, it has not been a great week for fancy car service, Uber.

To address concerns that the service is not scalable, the company’s CEO and cofounder, Travis Kalanick, made a public appearance to make one thing very clear. He is not worried. “We know what we’re doing,” Kalanick addressed a roomful of young entrepreneurs at Startup School, Y Combinator‘s annual event at Stanford University.

Kalanick has been travelling around the world in an effort to launch the car service in cities like Sydney, Paris and London. “I don’t even remember the last time I spoke in San Francisco in front of an audience,” he said.

In the opening minutes of his talk, he pulled up revenue charts to show that his efforts have not been in vain. The company is making strides internationally. “More than half of our employees are not in San Francisco,” he said. “We are growing fast [at] 29 percent month-over-month.”

To succeed, Kalanick needs to prove that the company can succeed outside of San Francisco. The tech hub is the fertile testing-ground for Uber: it is always willing to adopt new services, it is notorious for a lack of cabs, and many of its inhabitants have money to burn and very little time to get from A to B.

Investors have long feared that the service will fail to resonate with people in cities which do not suffer from a dearth of cabs or public transportation. Critics like VentureBeat’s contributor Rocky Agarwal have argued there is no scarcity of yellow cabs in New York. You might see five or six empty cabs pass by while you wait for an Uber to arrive.

To make matters worse, Uber’s cab-hailing app was shut down in New York after a protracted dispute with the city’s Taxi and Limousine Commission. Kalanick felt he was fighting the good fight, and that users were on his side.

“We are building an urban logistics fabric,” he said. “The older the industry you are tackling the more protected it is by government or by corruption or both.”

New Yorkers can still access Uber Black and the relatively lower-cost UberX offering. For Kalanick, the secret to success is to accelerate the time it takes for an Uber to arrive. When the company first rolled out its service, it took about 12 minutes. Today, the average wait time is less than five minutes.

The company has also received non-stop criticism for its dynamic pricing. Uber will increase the price of its fares as more people request them (when cabs are scarce, at rush hour, and so on).  Read more about the reaction to Uber’s “surge pricing” on New Years’ Eve here.

“Prices are a bit too high,” Kalanick conceded. “I know some of you have felt that sting.”

The entrepreneur ended his talk on an optimistic note. He stressed that the numbers don’t lie — Uber’s fast-growth and deepening user-engagement is impressive.

“Whenever I have a bad day,” he said, soliciting chuckles from the audience. “I just look at our overall revenue graph.”