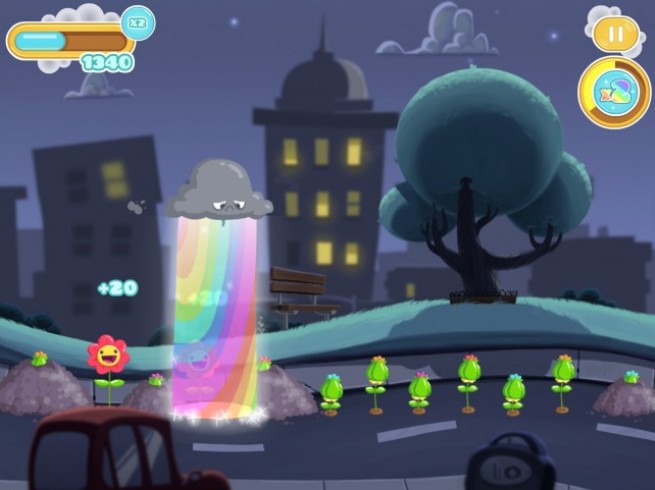 Hamlet is great and all, but I think I’ve found a slightly more tragic character.

Negative Nimbus, the first original iPad game from developer Cloudkid, is about a depressed rain cloud. He is sad because he can’t help but rain, and he often does so on characters who hate to get wet. This makes him feel terrible. It’s up to the player to help him rain on the plants and thirsty characters and to avoid precipitating on others that would prefer to stay dry.

It’s a simple concept that’s perfect for mobile devices, and it’s available now on iPad and very soon on iPhone as well.

“With most games you don’t really get the psychology of a character,” Cloudkid creative director Dave Schlafman told GamesBeat. “Yeah, in Angry Birds they want to kill the piggies, but you don’t get the sense that they’re overly angry or sad or happy, but Nimbus is this really empathetic character.”

Cloudkid’s key to developing that empathy for Nimbus was to give him real, understandable emotions. He annoys people, but he can’t help it. It’s his nature.

“He really feels bad when he rains on these happy characters,” Schlafman said.

Nimbus almost always has a sorrowful look on his face and becomes apologetic when he rains on characters who hate water. He weakly cries out, “sorry, guys.” And despite the fact that he’s bringing happiness to plants who desperately need his water, as the title implies, he focuses on the negative.

The developer also worked hard to build the appeal of Nimbus.

“A big part of hitting that sweet spot is finding the comedy that can hit all ages,” animation director Mike Annear said. “A grownup could play the game and get a laugh out of it because some of the jokes are more adult, and kids are going to like it cause it’s such a friendly fun-looking game.”

“One of the things we’ve looked at is the model of TV,” Schlafman said. “The idea that you have a character you can come back to see every single day and hang out with for 30 minutes. The world of casual games don’t really build out a world like that.”

The team also doesn’t plan to stop at the Negative Nimbus game.

“This is just one game of many different types of stories that we could tell with Nimbus and really get into his personality,” Schlafman said.

In early 2013, the studio is also going to release an animated web series online and in its own app. It’s a new project targeted at slightly older kids and young adults.

“The big thing with us is creating memorable characters that people love,” Schlafman said.

Cloudkid plans to submit Negative Nimbus for iPhone to Apple by the end of this week. Then the developer is looking at a potential port to Android devices.