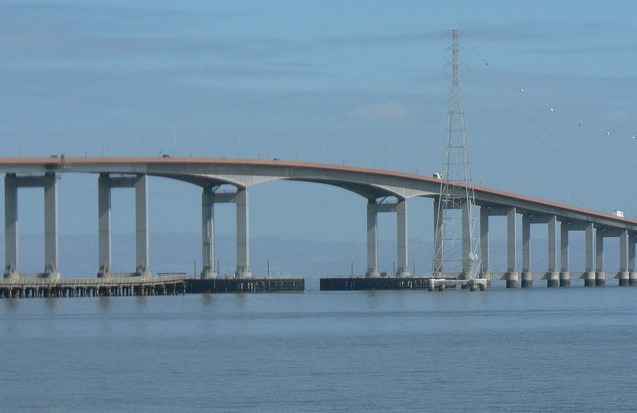 Bay Area residents discovered this weekend that the San Mateo Bridge, one of several that crosses San Francisco Bay, was closed. But if they listened to directions from Google, Apple, Microsoft,or Mapquest, they would have been advised to cross it anyway.

This is despite the fact that all of the services knew the bridge was closed. Here’s a screen shot from Google Maps. Notice that, despite the warning on the map itself, the driving time and route ignore the closure: 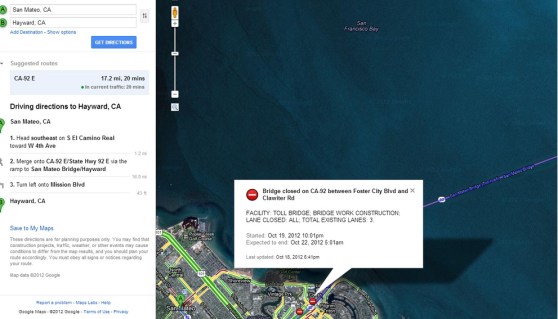 Not only did Google have traffic information that showed when the bridge would close and when it would reopen, it had traffic flow data that showed there was no traffic on the bridge. All of the services interpreted that data as a green light — hey, it’s clear sailing on the bridge — and gave trip estimates based on zero traffic.

In the grand scheme of things, it’s not that big of a deal because if you rely on their directions and pass the turnoff for the San Mateo bridge, the routing engines will recalculate the best path from that point. (Unlike the paper printouts from Mapquest or paper maps of yesterday.) But it does mean that you might be taking a less optimal path.

Although some of the services claim to use traffic data, they don’t seem to be using the available road closure data.

Getting the data isn’t always consistent. Sometimes there are small closures. A couple of blocks of my street were closed for a few days because of an Oracle conference. But this bridge closure was publicized well in advance and affected many in the Bay Area.

Big data allows for better routing. Although the lack of traffic at 3 a.m. on the bridge might not mean anything, lack of traffic at 3 p.m. on Saturday does mean something. By comparing data against historical norms for a road segment, you can tell whether something is out of whack. (Good or bad.)

As more drivers are out there with navigation apps, we’ll have more and more data to feed into such algorithms. There will also be more reason for state departments of transportation and emergency planners to interact with companies like Google and Apple.

I’m always thinking about how to make the world a better place. Having more real-time data fed to drivers is something that will definitely save fuel, frustration, and potentially lives.

One way to view a navigation request is as the equivalent of a flight plan. Airlines in the U.S. file their flight plans with the FAA before takeoff. Air traffic controllers use that information to guide planes along the best path, taking into account traffic, weather, and runway conditions. Requesting a route from Google or Apple is similar.

If there is an accident on northbound 101 in Mountain View,  the routing engine could automatically redirect people headed for Palo Alto to exit before Mountain View and then take surface streets. But people headed to San Francisco would continue to be directed on the 101 because, despite the traffic, it’s still the best path. In cases of severe accidents, traffic could be redirected altogether, allowing for faster responses from emergency crews.

Those who fly regularly are familiar with “ground stops.” If there are thunderstorms in New York that slow down arrivals, the FAA will tell planes scheduled from SFO to JFK to hold on the ground in San Francisco until New York conditions improve. This keeps the skies less congested. Although Google and Apple wouldn’t have the legal authority to keep you from driving, a mere alert that you’d be sitting in traffic for an extra hour might encourage you to run errands locally or stay at the office a bit longer. The alert could come with an offer — here’s $5 off dinner near where you are.

Dynamic routing could be tremendously effective in emergency evacuations, like in advance of a hurricane. Routes include contra-flow data and distribute traffic onto other roads, making more efficient use of the road network.

In extreme cases, such as when the Interstate 35W bridge in Minneapolis collapsed, a quick enough response could save lives.

This can be done faster than getting a lot of self-driving cars on the road. (Though I still look forward to riding in one.)

I was hoping to test how quickly Google and Apple responded to this feedback, because the San Mateo Bridge was scheduled to be closed again next weekend. But Caltrans finished two weekends’ worth of work in one weekend.

I hate it when government works too fast.