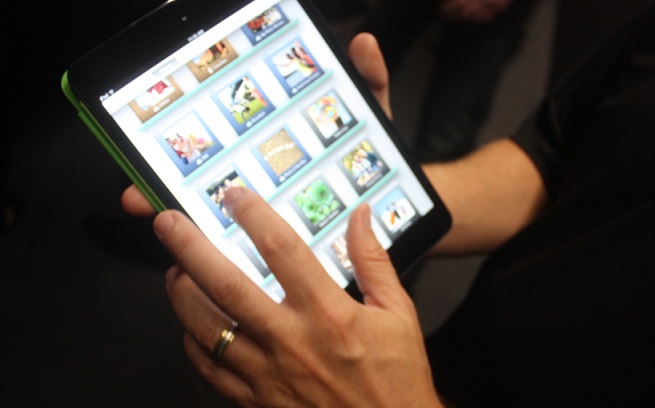 Game industry executives say that the iPad mini that Apple introduced today will be good for gaming because it expands the audience to new kinds of players and introduces a device that may be more comfortable in the hands of gamers.

By and large, the iPad mini fits into purses and man-bags. That will help it reach a broader audience.

“We see a bunch of things that are good for gamers here,” said Doug Scott, vice president of marketing and revenue at DeNA’s Ngmoco game division, in an interview with GamesBeat. “It’s backward compatible with iPad software. And any time that Apple jumps into a market, it legitimizes it and brings a lot of attention to that device type. There will be a rising tide for mini tablets, and that will drive awareness for gamers who might not have considered a tablet.”

The iPad mini has a 7.9-inch, 1,024 x 768-pixel display (not a “Retina” display) and an older A5 processor. He said that his teams will have to make some adjustments to deal with the different screen sizes and resolutions, but that won’t require a huge investment of resources.

Overall, the iPad has been good for gaming. The iPad currently accounts for 27 percent of iOS traffic, according to data collected by Chartboost, a mobile monetization firm. The iPhone accounts for 56 percent of traffic, and the iPod Touch is 17 percent. Chartboost says that the average number of daily game play sessions is 10 percent higher for iPad users than iPhone users.

Apple said today that its Game Center discovery platform now has 160 million users. It will be interesting to see how many move over to the new, smaller iPad.We emailed a bunch of other game industry executives and their responses are below.

Joe Kaminkow, chief executive at game developer Spooky Cool Labs, said, “There’s such a great audience on iOS. A device like the iPad Mini will grow that audience, bringing more potential players to the platform. More gamers means more opportunities for developers, and any gamers new to iOS should be very pleased with their decision to buy an iPad mini.”

Steve Allison, senior vice president at game publisher Telltale Games, said, ““Since it’s effectively an iPad 2 under the hood  the iPad Mini represents the first touch screen tablet in the 7-inch range that can actually run 3D games with any true competency – it should push user behavior to playing games ahead of e-reading and movie watching on these tablets for the first time.”

He added, “It should also create a spillover effect into the Android based 7-inch range of tablets as currently none of them are very strong 3D gaming devices. As such we expect competitors will rapidly seek to push out new versions of their hardware to keep specs competitive. The release of the iPad Mini  forever changes the notion that the 7-inch tablets are just for e-books and everyone making these devices will have to react and that’s good for gaming.  With the release of the iPad Mini Apple firmly keeps its lead as the premier handheld gaming platform.”

Eric Tilenius, entrepreneur-in-residence at Scale Venture Partners and a former Zynga general manager, was very bullish on the iPad mini. He said, “With full iPad resolution, full iOS 6 functionality, and a reasonably fast processor in a super light, super portable, one-hand format for a very reasonable price, iPad mini stands to double the size of the iPad gaming market over the next year.”

Meanwhile, Kai Bolik, chief executive of GameDuell, a game publisher in Germany, said, “I think it is lighter and smaller and will allow casual games to be played easier in the hands, while an iPad lends itself more for playing on the table or on the lap. On the other hand it is bigger than the iPhone and allows therefore for more control.

Rob Carroll, director of publishing at Tapjoy, said he hadn’t touched an iPad mini yet but he has been playing with the Nexus 7, the Android tablet that is the same size. He doesn’t think it will require developers to make changes to existing apps.

He said, “It will use the same graphics and design as the iPad, this makes it easy for small developers have one app launch across many different devices, which give them access to more users without needing to do extra work or market to a different store (ie. Phone vs tablet). The larger screen size allows for more detailed games over the phone size. Better looking, richer experiences are good for developers, it allows them to create more immersive game experiences. The smaller size should bring in new users that weren’t comfortable with the larger tablet size, expanding the tablet market and giving developers more reach.”

“One of the many–and there are many–reasons why developers lead on the iOS devices, is that there is at least a good understanding that 60 percent of actively used iPhone’s are 2 years or newer,” he said. “We know the technical specs and can easily determine which games our apps will operate properly on.My primary issue is that if the tablet market, much like the PC and Laptop market, goes down this road of having both low-end to high-end processing power, it will be difficult to determine market sizes, and developers may be forced to program to the lowest common denominator.”

James Rankin, CEO of Appatyze, said, “As a father I can see the mini being a device that is quickly adopted as ‘safe’ gaming platform for children. With more and more children spending more time online playing game and devouring digital content, I think the iPad mini will replace the iPod touch and ‘handmedown’ iPads as the must have device for middle class kids.”

Jude Gomila, co-founder of app discovery platform Heyzap,  said, “It fills the gap between gaming on your phone and gaming at your desk or in your bed. It will bring gaming to more situations for example while travel. The price point as well will open up tablet gaming to a wider set of people especially kids. It may have the effect that the iPod mini had on phone gaming but for tablet gaming and open up a new section of the market.”

William Siu, co-founder of Storm8, said, “I don’t have precise data to back this up, but given the size of the iPad (the big one), it’s definitely more portable than a desktop or laptop, but I have a feeling that most people only have the WiFi version. People with the iPad typically use it to play games at home on their couch, at a coffee shop — essentially it’s a device that you have to sit down and use at a static place. It’s great that it brings a big screen experience to a lot of the iOS games, but it’s still not a true mobile gaming device like the iPhone where people can easily take with them all the time and play anywhere (on a bus, at a restaurant, etc…).”

He continued, “With the new iPad Mini, we might have a device that provides a great balance between screen size/gaming experience and mobility. We’ve had some great result with some of our games on the Kindle Fire, so we are all pretty excited at Storm8 to see what Apple will bring with the iPad Mini. It might just bring a whole new tier of experience/market to mobile gaming just like what happened before with the launch of the iPhone and iPad. Apple has in the past always been great with their vision and bringing products to us that we didn’t know we love until we get our hands on them.”

Marco DeMiroz, chief executive of PlayFirst, said, “We expect iPad mini to broaden iPad’s appeal to a much larger audience without adversely impacting the new iPad. Although it’ll put competitive pressure on other tablets, it is absolutely beneficial to the consumers and market growth as the need for constant innovation to differentiate becomes the driving force benefiting all. Our focus is to continue to develop amazing and engaging games native to the platform by taking advantage of all the capabilities of the device. We like the dual-core A5 with quad-GPU to deliver awesome graphics and user experience as the rest of iOS devices.”