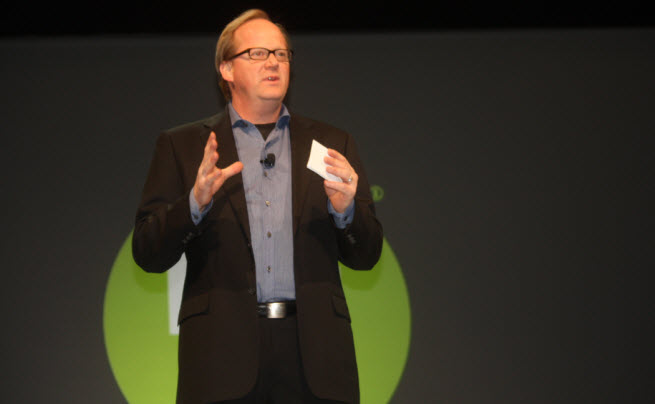 The game industry’s brain trust has revamped the structure of its exclusive DICE Summit conference and renamed its industry awards.

The 12th annual DICE (Design, Innovate, Communicate and Entertain) Summit will be held at the Hard Rock Hotel in Las Vegas and will feature an awards program — renamed the DICE Awards — in the larger venue of the Hard Rock’s The Joint remodeled concert hall, said Martin Rae, president of the Academy of Interactive Arts and Sciences. The changes are aimed at garnering more attention for both speakers and the awards program, which draws around 900 or so people who are leaders, visionaries, and decision makers. It’s a high-end event for an industry that generates $25 billion a year in the U.S.

Rae (pictured above at last year’s event) said the new format will shake things up at the conference, which has been successful at drawing some of the industry’s elite executives and game developers for the past 11 years. This year’s first announced speakers include Jenova Chen, creative director and co-founder of thatgamecompany (maker of Journey); Randy Pitchford, president of Gearbox Software (maker of Borderlands 2); and Jesse Schell, chief esecutive of Schell Games (maker of Puzzle Clubhouse) and distinguished professor of the Practice of Entertainment Technology at Carnegie Mellon University. Their jobs are to enlighten, inspire, and challenge the attendees.

The venue change brings the DICE Summit closer to the Las Vegas Strip. In the past, the event was held at the Red Rock Resort outside of Las Vegas. Rae said that The Joint, which now holds 1,400 people in a tiered hall, is a big part of the reason for moving it back to the Hard Rock, where early DICE Summits were held.

“It’s still going to be an intimate experience where people can get business and socializing done,” Rae said. “But our board is always looking to how we can grow the awards show in stature and the conference too.”

As always, the conference themes will focus on tracks related to design, innovation, communication, and entertainment. But each talk will be shorter, around 18 minutes to 20 minutes, much like the vaunted TED conferences. “We want to leave people wanting more,” he said. “We will have really creative people.”

Some of the talks will be livestreamed.

“Interactive entertainment is ingrained in our culture,” Rae said. “We’re a $60 billion global industry of individuals and companies who are pushing the boundaries of technology, creativity, and artistic expression every day. The Academy established the annual DICE Summit and awards program to not only celebrate our industry achievements but to provide a dedicated forum to share ideas and foster innovation. Our industry is maturing, and we’re excited to reflect that with changes, such as the new format and new look for the Awards, so that we remain at the forefront of shaping and moving our industry into the next stage of its evolution.”

The 16th annual DICE Awards (previously known as the Interactive Achievement Awards) are peer-driven, where Academy members vote on the best games of the year. They’re like the Oscars for games, but they haven’t had great exposure in the past.

“Over the past several years, our members and many supporters independently began referring to our awards program simply as the DICE Awards — a nickname celebrating the shared history and principles embodied in the D.I.C.E. Summit moniker,” said Rae. “We began to think that this nickname, coined by our community, would serve as the best and boldest way to represent the awards. It truly encapsulates what we are all about: the celebration of the amazing designers, innovators, communicators, and entertainers within the video game and interactive entertainment industry.”

The summit will begin on Feb. 5 with the traditional golf, go-kart race, and poker tournament. But the group will add whiskey, beer, and wine tasting, as well as a 5K run event. The conference will take place on Feb. 6 and Feb. 7 (Wed. through Thu.), with just a send-off breakfast on Friday, Feb. 8. The awards will be held on the evening of Feb. 7. Rae said that the event will effectively close after the highlight awards in contrast to years past. Registration is now open.