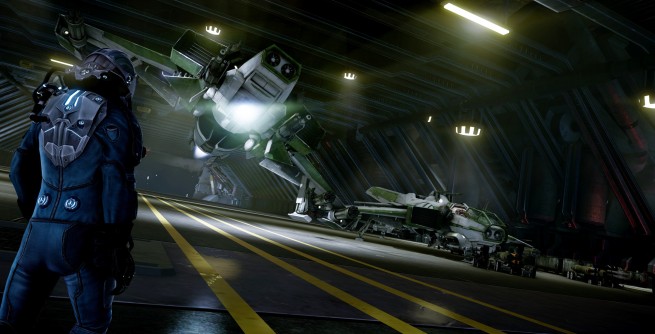 Developer Chris Roberts and his Cloud Imperium company reached their $500,000 goal in less than six days. The total amount raised currently sits at $552,000.

Star Citizen is a PC-only game with a dynamic universe where players get their own spaceship and can fight in the military or branch off and explore the stars. It’s an ambitious looking game with a lot of crazy ideas, but it’s also something that gamers appear hungry for.

““The amount of support from our fans has been overwhelming,” Roberts said. “We had a few hiccups on our own site in the first week of operation, which led us to open up the Kickstarter page. Kickstarter provided better scalability for us and additional options for our fans. In the end, this is all about breathing new life into the PC games business. PC gamers have been left on the sidelines for the last few years. I want to utilize all the new technology that a PC can provide and bring space sims back into the modern area with a bang.”

Roberts is the mastermind behind beloved PC space-sim franchise Wing Commander. He’s been out of games for about a decade, and he’s hoping that Star Citizen is his triumphant return.

“Getting back into gaming is something I’ve been thinking about for several years,” Roberts said. “With all the new tech, it’s a whole different universe for developers, and I’m ready to take the welcomed plunge again. All I can say is that I’m having a blast doing this. With all these backers and pledges and the team we’ve assembled, we can and will raise the bar to a different stratosphere for PC gamers and space sims.”

Prior to the Kickstarter, gamers were pledging support to Star Citizen by donating on Robert’s personal funding site robertsspaceindustries.com. That venture raised over $1.3 million across 15,000 backers, which brings the total funds raised to $1.9 million.

The Kickstarter still has 25 days to go, so (if you take RSI-raised funds into consideration), Star Citizen could still raise as much as other huge gaming Kickstarters like Double Fine Adventure. But even if Roberts sets crowdfunding records, it’s unlikely a game of this magnitude will get through the entire development without the help of an outside publisher.