Earlier this week, review copies for Halo 4 were distributed out to publications and independent reviewers by the dozens. This game that Microsoft is cleverly dubbing 'biggest game of the year' has all odds stacked against it as traditional developer Bungie, is absent as the franchise has been handed off to Microsoft's Halo-focused subsidiary, 343 Industries.

So just how is this new installment to the blockbuster franchise appealing to the critical masses? Well we won't know just yet, or at least for another week that is. 343i is allowing publications limited gameplay release on November 1st, and full-gameplay release (obviously) on the release date of November 6th.

Halo fans wondering just what score IGN or GameTrailers are going to pinpoint Halo 4 at on their scale, be ready for early text reviews and previews of the game on November 1st.. We're in the homestretch now, my friends. 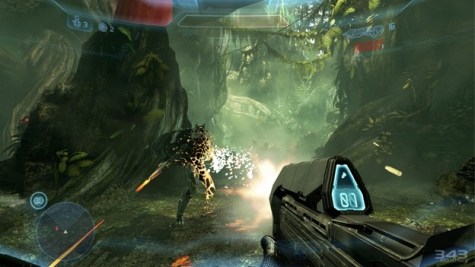 If you've never played the Halo franchise and/or if you're not understanding the hype surrounding the game, I encourage you to dip your feet in. While the franchise handlers very safely and generically say that Halo 4 is great for new-comers to the series, I suggest grabbing a copy of Halo 3 in the next week before release.

Figuring out how the Master Chief got into his current predicament could better shape your understanding of the story that we are soon to embark on.

Those like me who have read the Forerunner Saga are eager to see what Requiem has in store for our faceless hero. Curious to see what exactly the plans of the D-