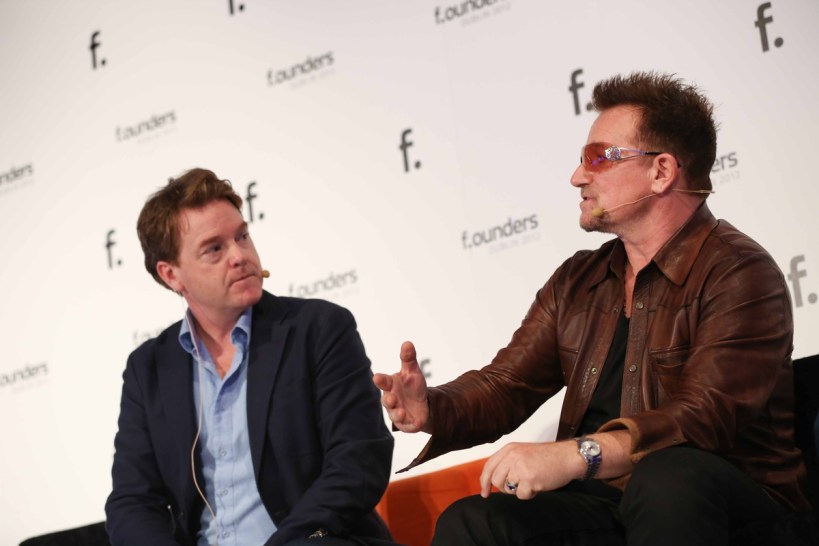 You don’t often find U2’s Bono, economist Larry Summers, and Wael Gnomin, the Google marketeer whose Facebook page helped spark the Egyptian revolution, at the same event. You certainly don’t find them being sent on a pub crawl around Dublin. But that’s what happens at F.ounders, an invitation-only gathering of the founders of 150 of the world’s top tech companies and other luminaries.

F.ounders took place in Ireland last weekend, and it was quite a scene. Oscar-winning film director Jim Sheridan (My Left Foot, In the Name of the Father) led one of the pub crawl groups. U2’s The Edge took time out from the music studio to give a talk. The guy sitting beside you on the bus would turn out to have sold Adsense to Google or started Geek Squad. While Kila played, half of Silicon Valley took to the dance floor with their own rather creative interpretation of Irish dancing. Later they tried to play Ireland’s national sport — hurling — without bothering to learn the rules. After several late nights, the founders were talking about sleep as greedily as new mothers.

So how did F.ounder’s organizers (a self-described failed entrepreneur, freelance journalist, and unemployed asset manager), with no background in technology, convince some of the world’s top entrepreneurs to come to an unknown event at the far edge of Europe? 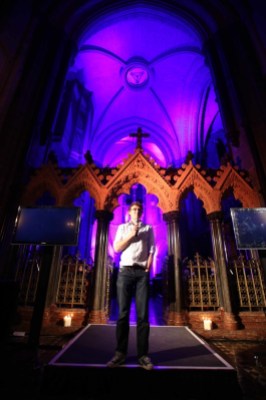 “Paddy could sell sand to the Sahara,” was the explanation offered by one wag. The Paddy in question is Paddy Cosgrave, the mop-headed, bespeckled twentysomething  who first came up with the grand vision for F.ounders. “I started a company called MyCandidate that wasn’t much of a success,” Cosgrave says. “If anything, it was a failure.” (The company was, in fact, acquired.)

Cosgrave then started the Dublin Web Summit in 2009. That event hit 4,000 attendees this year, making it the biggest tech conference in Europe.”The first web summit was very small — 150 people — and it was terrible,” he recalls. “The audio-visuals didn’t work. The Wi-Fi didn’t work. The catering was from Domino’s pizza. It cost money. It didn’t run on time. MyCandidate hadn’t worked very well, and the Web Summit hadn’t worked very well. I was a bit depressed and deflated.”

It was at this low ebb that Cosgrave started to think about doing an event for company founders.”Guys like [Skype founder] Nicholas Zennstrom know what it is like to be up against the wall with three guys, a backpack containing all his possessions, no money, and a crappy apartment in London, ” he says. “That’s the reality for every entrepreneur at some point in their career. So I wondered if you could create an event for founders.There was no company because I never saw it as a business. It was all personally financed.” 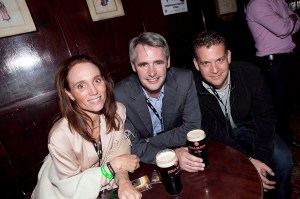 Zennstrom was, in fact, the first person to accept an invitation to the inaugural F.ounders.”As for Silicon valley,” Cosgrave said, “I could pretend it was because I was incredibly charming, but in reality, I wrote to so many people that in the end the two most curious guys on the West coast got back to me: Jack Dorsey of Twitter and Chad Hurley of YouTube.” Both Dorsey and Hurley come from Irish backgrounds. Dorsey’s family name was originally Darcy, but an over-enthusiastic emigration officer changed it. With those three tech superstars were on board, persuading others became much easier.

Cosgrave then recruited flatmate and former asset manager David Kelly and journalist Daire Hickey as his own cofounders.”I was a freelance journalist, ” says Hickey. “I was chasing property developers around the place for the Mail on Sunday. Paddy called me one day around six weeks before the first F.ounders and said, ‘I’ve managed to convince the founders of YouTube, Skype, and Twitter to come to Dublin. Can you help me with publicity and the program?'”

Hickey agreed and then rapidly realized how chaotic the whole project actually was. “Paddy wanted people speaking on gaming and PHP and mobile, and I was meant to run all of this and I had no idea about any of these things,” Hickey says. “But I did convince a lot of media to come to Dublin. There was one point where I turned to Paddy and said we are going to fuck up on a major scale in front of the world’s media and they will all be there going, ‘What the fuck happened? How did we get here? This is the worst event ever!’ We would be embarrassed forever more.” 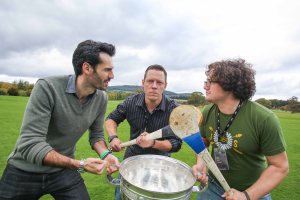 Above: Founders try out hurling

But somehow the first F.ounders came together and immediately garnered rave reviews. The design of the conference program was also somewhat unconventional. “I’d never really been to a corporate conference. I went to music festivals, ” explains Cosgrave. “I thought that people really connected with each other and did business deals over a pint or a coffee.”

This led to minimal conference sessions and lots of socializing. This year the formal program included many small group discussions on subjects from robotics to work-life balance, hosted by the founders themselves. It seems to work. Matt Mickiewiecz, cofounder of 99Designs, told me that he met his new business partner at F.ounders 2011. It is rumoured that Uber’s $32 million funding deal went down at the event last year.

But F.ounders is less about doing immediate business than about human beings — who happen to create companies — building relationships and having fun together. Most tech conferences have an asymmetry between the speakers, investors, journalists, and everyone else. Founders constantly have to perform. In Dublin, they can relax a bit in the company of their peers.As one founder told me, “No offense, but I would really prefer if you [as a journalist] weren’t here.” 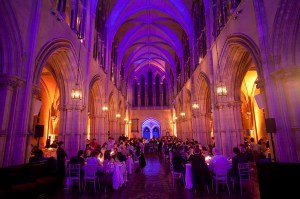 Above: F.ounder’s dinner at Christchurch cathedral

The format encourages serendipity. Anna Scally bumped into Moshi Monsters maker Michael Acton Smith, who gave her a rare “Mr. Moshi” card for her 6-year-old-daughter Eva. The astonished Eva wrapped the card in cling-film to protect it before bringing it to school the next day.Engineyard’s Eamon Leonard bought a Sunbeam Rapieron the street at 2 a.m. because it was the car his dad sold when he was born to help fund his new family.Everplaces CEO Tine Thygesen found herself chatting to Pinterest founder Paul Sciarraduring the pub crawl. When she finally asked for his business card, he looked at her and said, “But can’t we just hang out?”At F.ounders, they probably can.