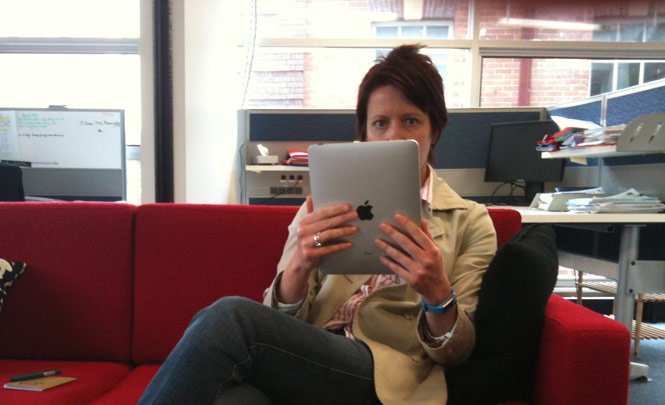 Apparently, people like to have fun, and they buy digital devices to assist them in that noble quest.

This is perhaps not a shock.

But they use those devices differently, according to Flurry, the app analytics company. To understand those differences between how we use our smartphones and smart tablets, Flurry analyzed six billion user sessions from 500 million devices in September.

Tablet owners are a little older than smartphone owners and have fewer Y chromosomes. And they spend a lot more time on games — 67 percent of time spent on a tablet is spent playing a game, versus 39 percent for smartphones. 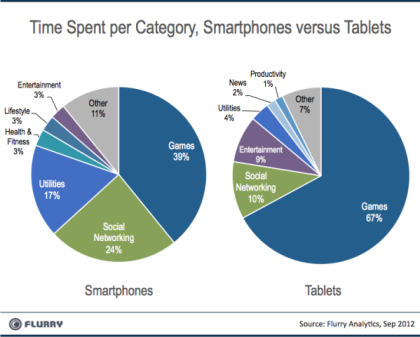 Of course, this shows some overlap between devices and owners, with many owning both smartphones and tablets. But when Flurry analyzed the demographics of the 30 million people who have granted it the right to collection information on them, they found that, on average, tablet owners tend to be both more female and a little older.

Tablets are for after dinner — the prime-time entertainment hours. While smartphones are in use all day, and do also show a small increase in the evening hours, tablets spike in the three hours between 7 p.m. and 10 p.m.  That jives with Forrester research that says that 85 percent of tablet owners in the U.S. use them while watching TV as a second screen: following tweets, sharing updates, and chatting about what they are watching.

But it can’t just all be second-screen: That 67 percent of time spent playing games means that there must be a significant theft of time from traditional prime-time entertainment as well. 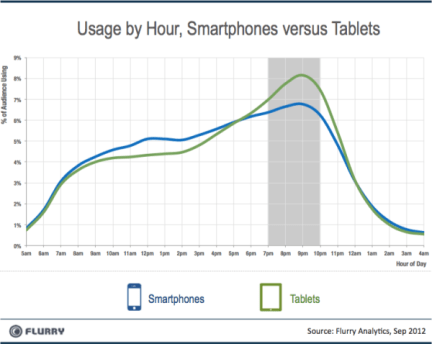 In addition, Flurry found that while smartphones are used more often than tablets, tablets are used for longer periods of time than smartphones. App engagement — the number of times a person opens an app — was 12.9 times each week on smartphones, versus 9.5 on tablets. But minutes per session showed 8.2 minutes in each tablet app, exactly double the 4.1 minutes in an app on a smartphone.

That rings anecdotally true: You pull out your smartphone to check a message or your calendar and then put it away … while you pull out your tablet on the sofa to catch up on news, read a book, or play a game.

In short, despite work from Apple and others to position them as more than entertainment devices, the biggest use case for tablets is still the sofa, while the smartphone’s home is still your front pocket.