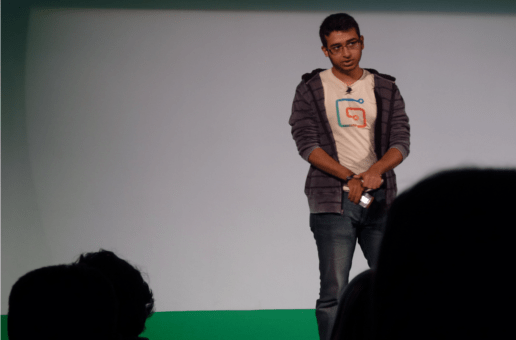 Some of the hottest startups out right now are those in the payments sector. Square, Stripe, Flattr and Braintree are some leading the pack, as well as newcomer Gumroad, which wants to make it as easy to sell to followers as it is to share a link.

Gumroad founder and CEO Sahil Lavingia is especially well-placed to speak about the zeitgeist of innovation in payments. Fresh out of his teens at just 20, Lavingia’s based in the San Francisco Bay area, where he dropped out of the University of Southern California to become one of the first employees at Pinterest.

He’s also in close touch with the payments sector old guard (old in startup terms, that is) – PayPal’s 37-year-old co-founder Max Levchin, who invested in Gumroad’s $1.1m seed stage round, announced soon before a $7m Series A round led by Kleiner Perkins.

Speaking at WHU’s IdeaLab! conference in Vallendar earlier this month, Lavingia was pressed about raising such an enormous round – why, the business students wanted to know, did he raise so much? Well, Lavingia pointed out, now he’s not going to need to raise more for a very long time…

We caught up with Lavingia at the conference for a one-on-one about the idea big enough for him to leave Pinterest, and his plans for this year.

The plan – tackling everyone from Lady Gaga to “my Mom”

Gumroad lets creatives sell directly to their followers by sharing a special short link (ideal for Twitter). Those who click are taken to the product for a quick purchase — with Gumroad taking a five per cent plus 25 cents cut — with the proceeds sent to the seller in batches at the end of each month.

The obvious use cases are for music clips, e-books, individual graphic files, and craft products. Freelance writers could, potentially, sell follow-up news pieces or blog posts on whatever’s currently trending, making the most of hashtags on Twitter. Experts could also promote and sell advice directly through their social media channels where, as Betakit points out, they’re having a lot of those kinds of conversations anyway.

Keeping the service ubiquitous is a key challenge. ”We’re trying to focus on building feature sets that apply to almost everyone,” Lavingia says. “Very rarely will we build a feature that’s specific to music or selling a book… We might offer them, in ways that are hidden from everyone except for those who need it. So maybe you’re selling a PDF that has certain features that are only applicable to that. That’s very likely.”

Profitability is one to two years off, at this point. “I don’t think we’re far off. If we wanted to focus on that I think we could probably do it but right now our focus is on building a really awesome product and hiring really great people to help us do that.”

“We just work on whatever we think is cool”

Lavingia’s youth, or maybe just his idealistic, very confident personality, seems to be putting a stamp on the work culture:

“We have a list of things we know we need to do and then we just work on whatever we think is cool,” he says, when asked about Gumroad’s plans for the rest of the year. “Very rarely will we be like, I need to work on this today, and this the week after, and this the next month – it’s like, what do you want to work on today.”

If that sounds like fun, it’s also extremely hard work. The 11-hour flight to Vallendar, Germany, came as a welcome break. “I love long flights. I slept more today, last night, than I did in the past week,” Lavingia says. “I read my Kindle for the first time in three weeks, even though I love reading…”

Gumroad fits neatly into a major trend shaping internet startups – the rise of the “maker”. As Amen founder Felix Petersen put it in a recent interview with us, social status is now less about the car you drive, it’s about what you do and create.

This, ultimately, is the big idea behind Gumroad, the one with enough pull for Lavingia to leave Pinterest just as it was taking off: ”The biggest problem to solve is to help other people solve problems… Apple’s App Store for example, is one of the best products on the planet, in terms of impact. Not because it helps people with iPhones but because it extrapolates on top of that.”

With Gumroad, Lavingia wants to make it really easy for creators to sell products and live from what they make, rather than needing to take a nine-to-five job or crappy freelance contracts to pay the bills.

“If we can make it really easy for people to create content and sell it easily, and turn more makers into merchants and get rid of middlemen, that would help people make so much more cool stuff,” he explains. “That’s the only market I care about.”

This story originally appeared on VentureVillage, one of VentureBeat’s syndication partners in Germany.