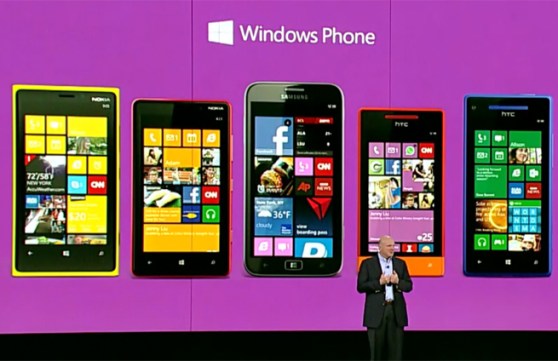 Windows Phone 8 takes the Microsoft mobile OS to a new level with all kinds of cool additional features, including more impressive hardware, NFC mobile payments, easier game development, a more customizable start screen, a “Kid’s Corner” so children can play with an adult’s phone, and more.

The early lineup of WP8 phones looks strong. Nokia will offer its Lumia 920 and 820, Samsung its ATIV S and ATIV Odyssey, and HTC its 8X and 8S on various carriers around the world.

In the U.S., here’s what the lineup looks like by the three carriers offering Windows Phone devices (prices are with a two-year contract):

From these dates, it appears that U.S. carriers won’t have the devices available “this weekend,” but there may be other carriers around the world that will.

“In addition to phones hitting the shelves, between Windows 8, Surface, and Windows Phone 8, you won’t be able to turn on a TV or open a magazine without seeing a Microsoft Windows ad,” Ballmer said.