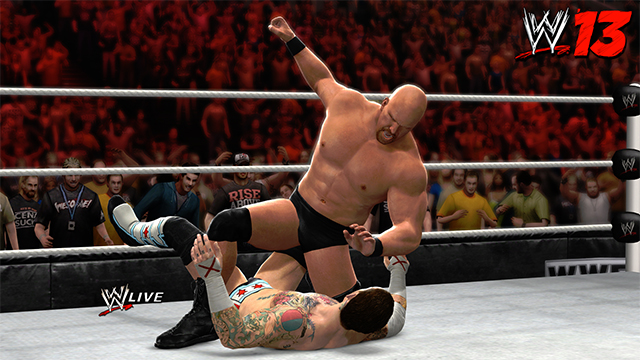 Ladies and gentlemen, the following review is scheduled for one page with a possible score ranging from 0 to 100.

Introducing first, from developer Yuke’s and publisher THQ, scheduled for release today for the Xbox 360, PlayStation 3, and Nintendo Wii — WWE ’13!

And its opponent, from Youngstown, Ohio: He is a longtime fan of professional wrestling and wrestling games, Mike Minotti!

Can WWE ’13 pull off enough tricks to impress this seasoned fan, or is it another yearly release not worth bothering with?

The Attitude Era Mode is the greatest feature in WWE ’13. The mode revisits the best period of professional wrestling history, when the WWE threw aside superheroes and goofy gimmicks for grittier, more real characters in the late ’90s. You play as some of the biggest stars from the period, such as Shawn Michaels, Stone Cold Steve Austin, The Undertaker, and The Rock, and relive many of the most iconic matches from the Attitude Era. 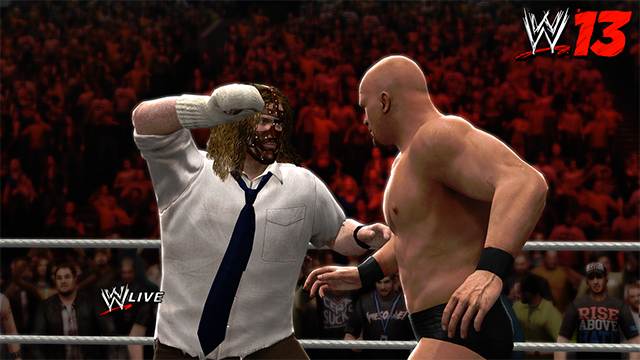 Each match has a simple objective (like winning via a pin), but they also contain “historical objectives,” which task the player with re-creating specific moments from the match as they actually happened. For example, during the famous Montreal Screwjob (a match that ended in a major controversy when WWE owner Vince McMahon called for the bell when Shawn Michaels had champion Bret Hart in a submission move even though Hart never submitted), you play as Shawn Michaels and have the option of putting the Sharpshooter on Bret Hart, just as it actually happened.

The attention to detail in this mode is tremendous. WWE brought Jim Ross and Jerry “The King” Lawler, the original commentators from the era, back together to re-create their famous dialogues. The game also inserts well-produced video packages between some of the matches, adding historical context to your gaming with real footage from the era. You even see a chart during loading screens that shows you the ratings of WWE’s flagship show, Raw is War, and its biggest competitor, WCW’s Monday Night Nitro. 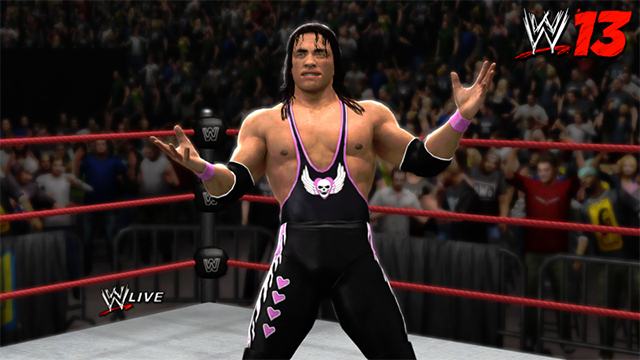 This is the best attempt at a single player mode that I’ve seen in a wrestling game. Is nostalgia responsible for that? Absolutely. WWE filled the Attitude Era with the best characters and stories in wrestling history. Even digitally, these personalities make many of the modern superstars look boring and tired.

WWE games have featured great creation modes for a long time, and WWE ’13 doesn’t disappoint. You can make your own wrestlers, entrances, moves, arenas, and belts with an impressive amount of options. For fun, I created a wrestling version of Captain America, who looked impressively similar to his superhero counterpart.

A lot of the fun comes in pitting your creation against real wrestlers. It’s hard not to laugh when you watch Captain America eat a Stone Cold Stunner.

Last year’s WWE ’12 simplified much of the in-ring action after years of wrestling games had left the controls overly complicated and confusing. WWE ’13 doesn’t change much, but pulling off moves in the squared circle is still delightfully simple. Even a novice could quickly pick up a controller and learn the basics of combat, something that definitely couldn’t be said of the series a couple of years ago.

However, countering moves has always been one of the more difficult aspects of the controls. It just takes a simple button press to reverse almost any move in the game, but your window to do so is incredibly small. Thankfully, WWE ’13 now gives you feedback on your countering, letting you know if you were too early or late with your button press. 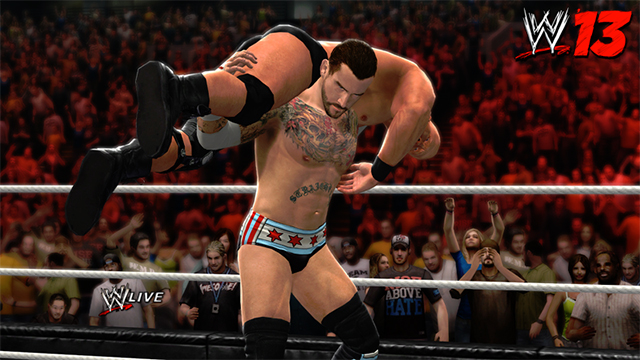 While the Attitude Era mode shines a bright spotlight on wrestling’s past, the modern product gets stuck in the shadows with the WWE Universe mode. It’s essentially fantasy wrestling. You import your custom wrestlers, belts, and arenas into a full WWE season. You can simulate every match of every show or opt to play them out yourself.

But you can’t make absolute decisions. You can’t decide that you want John Cena in the main event of WreslteMania. The game makes those decisions for you. While you can influence wrestler rankings by playing through matches and ensuring who you want to win wins, it’s no guarantee of what will happen.

I would have preferred a mode where you picked a single wrestler (even a custom one) and played  him through a full year of shows and pay-per-views. Instead, you just have to hope that the guy you want to play as gets scheduled for a match. 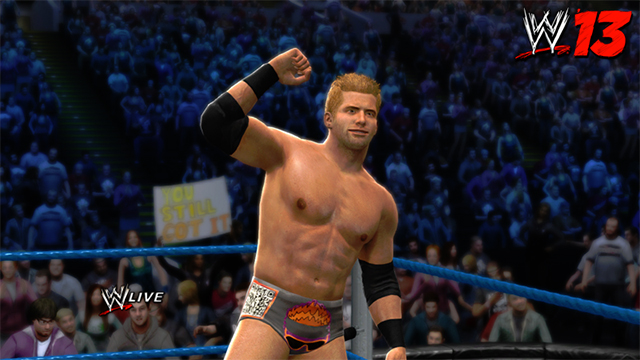 Some of the game models barely look like the wrestlers they’re supposed to represent. Zack Ryder (pictured above) has bright blonde hair (his real hair is brown) and a face that bore little resemblance to the real thing. When other sports games, like the NBA 2K series of MLB The Show, can create seemingly realistic versions of athletes, then why do these wrestlers look like a guy who never actually watched a match before designed them?

WWE ’13 ultimately plays almost exactly like WWE ’12. After such a major overhaul to the franchise, I’d have been surprised if Yuke’s already decided to make drastic changes to the gameplay.

But the Attitude Era mode is what really makes WWE ’13 worth purchasing, especially for long-time fans of professional wrestling. I had a nostalgic blast playing through many of my favorite moment from WWE history, and it’s great to see half of the game’s huge roster filled with classic grapplers from the late ’90s.

Even if you know little about the pseudo-sport, you can still dive in and have fun tossing your opponent all over the ring. But die-hard wrestling fans will definitely get the most joy out of WWE ’13.

WWE ’13 released for the Xbox 360, PlayStation 3, and Nintendo Wii on Oct. 30. The publisher provided GamesBeat with a copy of the game for the Xbox 360 for the purpose of this review.