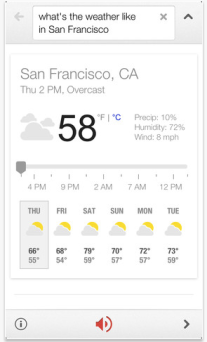 With a few minor exceptions, Siri’s vicegrip over voice search in iOS has been largely uncontested.

Google, however, is looking to change that with its new, more advanced Google Search app for iOS. As with Siri, the app allows users to search for information using simple, natural language.

To get irs information, the Google Search digs into Google’s Knowledge Graph, which the company unveiled back in May. With the feature, Google is able to get information on major topics like landmarks, the weather, travel schedules,  and movies, and use the info to return relevant answers relatively quickly.

As you can see in the video below, the result is a search experience that should feel very familiar to Siri users. While the app likely doesn’t work quite as rapidly as Google advertises, Google Search and similar efforts represent the future of search and can only get faster from here.

Probably the biggest obstacle for the app, however, is that it’s operating on Siri’s home turf and won’t have the same phone-level functionality as Apple’s own software. And that’s probably never going to change.