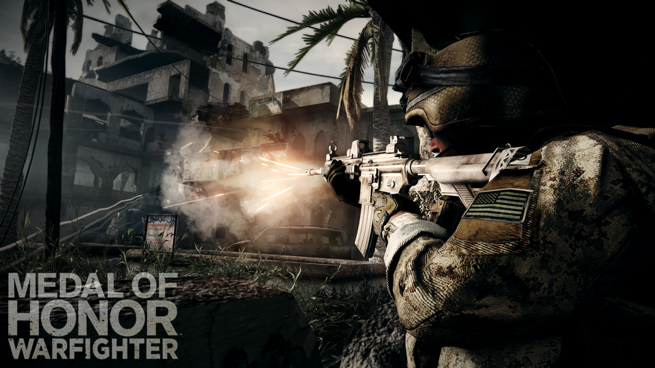 Jingoistic modern-day first-person shooters love quotes from icons of American history, or at least their loading screens seem to enjoy them. So I couldn’t help but use a JFK classic to summarize Medal of Honor: Warfighter as an experience: “Change is the law of life. And those who look only to the past or the present are certain to miss the future.”

Electronic Arts’ recently released multiplatform first-person shooter assumes we can’t get enough of the blockbuster bang-and-boom escapades that have made competing franchises like Activision’s Call of Duty so popular.

Yet with Warfighter, EA remains at the rear of the corporate first-person-shooter platoon because it chose to march in place instead of moving forward.

That doesn’t necessarily mean Warfighter can’t hang with its big-budget brothers in arms, so let’s enter the fray and take a closer look.

The modern-warfare shooter model is tired but still fun

Warfighter clearly takes inspiration from other releases in its genre. Unlike some of the me-too efforts that have followed a similar path, the gameplay here can be pretty fun at times. Shooting mechanics are familiar and precise. Helpful onscreen icons let you know when you’ve nailed that reflex-rewarding headshot. And single-player skirmishes give you access to a convenient peeking move that facilitates leaning around corners, adding a slight cover-based-shooter vibe to the combat. Sadly, the feature is unavailable for multiplayer encounters.

Wait … is this Need for Speed?

The remarkably short single-player campaign doesn’t just leave you gripping human-neutralizing weapons. It makes you grip a steering wheel every now and then, too. These vehicle sequences are surprisingly lengthy, and they task you with driving through people-packed Pakistani streets and freshly paved Dubai motorways. You’ll even get to maneuver an indestructible Zodiac boat through a fiery-and-flooded Filipino town. 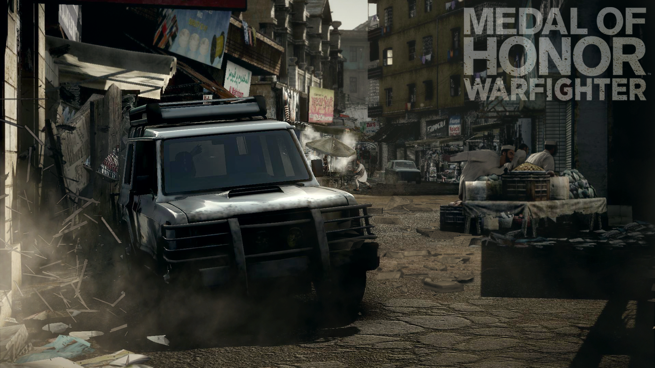 While these moments don’t have the same feel as a tightly tuned EA racing title, they break up the body-count-boosting fighting sequences pretty effectively.

Obviously, Warfighter puts a lot of emphasis on multiplayer. Playing on the Xbox 360, I had to insert a whole new disc just to battle other flesh-and-blood beings. Regardless, you’ll encounter many of the standard FPS multiplayer tropes. So expect to unlock different combat classes and weapon loadouts by racking up kills in the different online modes.

What makes Warfighter stand out, however, is its global approach to the aforementioned classes. Keeping with its from-the-frontlines tone, you’re immediately asked to browse through different real-world, tier-one special-forces archetypes representing 10 countries. You can deploy as a United States Army SFOD-D assaulter, a Canadian JTF2 sniper, or even a German KSK heavy gunner, among others. While somewhat superficial, the international angle adds an interesting layer to the typical choose-your-guy-and-go approach. 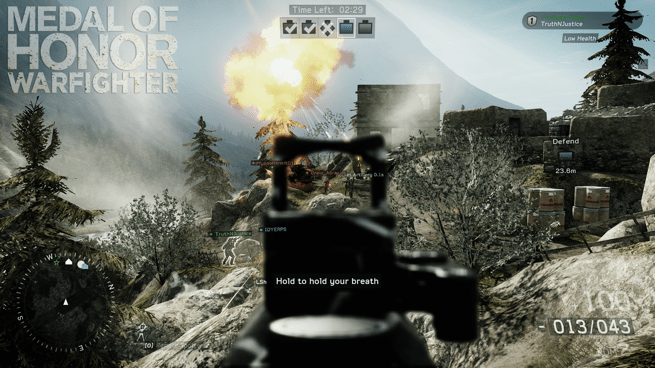 Multiplayer also introduces the “fire team” concept where you’re paired with someone for a group-deathmatch session. You’ll receive bonuses as you help your fellow friendly, and you’ll even have the option to respawn at your buddy’s location (if he can stay alive long enough).

Every contemporary-combat based FPS has a gratuitous near-death, arms-flailing-in-front-of-you, holy-expletive moment or two … or 12. Warfighter joins the club, but the instances in its single-player campaign take inspiration from actual events, adding a never-before-seen level of “realism.” So this time, when a massive explosion causes a chain reaction that leads to a giant crane collapsing on top of you, it’s more “lifelike.”

Horribly rendered CG cutscenes try to weave a patronizing and sometimes confusing tale of country-first heroes sacrificing their personal lives in the name of righteousness. One of the protagonists deals with personal crises involving his need-to-know-basis mission and uncanny valley-dwelling wife and daughter. Again, mimicking the “real thing.”

The genuine men and women fighting these wars are facing life-and-death threats, both on and off the battlefield. No one can replicate or claim to replicate what they’ve gone through, are going through, and will go through. Most FPS releases hide behind a digital veil of ignorance. They’re just video games, right? Nothing but mindless fun. EA deliberately chose to stick the authenticity label on Warfighter, and that decision brings the consequences, and scrutiny, that come with it.

In short, Warfighter feels like a Michael Bay movie masquerading as a Kathryn Bigelow film.