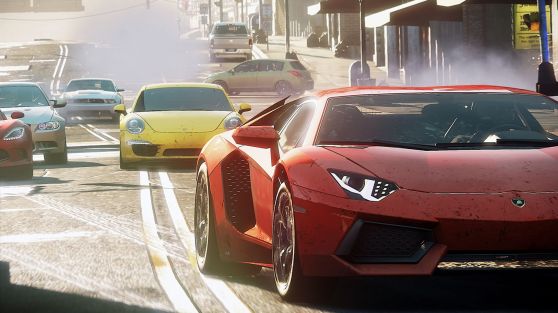 You maneuver a multimillion dollar sports car around the curve of a busy highway you’ve turned into an impromptu racetrack, dodging cars and grinding your paint against the guard rails. Another driver in the race speeds past, and you move in for the kill. Flooring the accelerator and hitting the boost, you push him into oncoming traffic, where he collides with a minivan. As you celebrate the hunk of metal growing smaller in your rearview mirror, you don’t notice the slow-moving sedan that you’re about to crash into until it’s too late.

Maybe you shout your favorite four-letter word. Maybe you close your eyes to spare yourself the carnage. Either way, if this scenario sounds familiar, you’ve probably played one of the games in Criterion’s beloved Burnout series … or Need for Speed: Most Wanted, which is another Criterion production. It’s also that studio’s second crack at EA’s long-running racing Need for Speed franchise (the first being 2010’s Hot Pursuit).

But is Most Wanted a rightful heir to Burnout’s legacy or a cheap knockoff?

Much like Burnout Paradise, Criterion’s last game before taking over Need for Speed, Most Wanted drops you into an open world and strives to give you as much control over your driving as possible. They don’t want anything holding you back from racing the way you want to, whether it’s menus, limits on selectable vehicles, or locked areas. In one of the game’s simplest innovations, almost all of the cars (except for a specific handful) are available from the beginning. All you need to do is explore the city and find them.

Your main goal is to climb to the top of the Most Wanted list, a group of the 10 best drivers in the city. The way you do this is by challenging each driver (in descending order) to a race, beating them, and then shutting their car down by forcing them into a crash. Before you can challenge them, you need to accumulate a predetermined amount of Speed Points by completing races, crashing through hidden billboards, and finding secret paths with one of the other cars you’ve collected.

The openness extends to the game’s multiplayer as well, although its mod and car unlocks are separate from the single-player mode. Once a multiplayer game begins, you drop back into the city, and the game points you to a meet-up location where you and the other players can initiate a competition. These shuffle though generic races, team races, and a few location-specific goals that let you see if you can fly further off a jump or maintain a single drift longer than your opponents. It all benefits from a very loose structure that feels more like hanging out with friends (who happen to be driving expensive cars) than the usual more menu-based online offerings.

If all of this freedom sounds similar to Burnout Paradise, that’s because it very much is. I’m not implying that Most Wanted feels derivative, because the game’s similarities to Paradise are actually it’s strongest aspect. The name on the box may say Need for Speed, but this is clearly Criterion trying to sneak out an upgraded version of their last Burnout game. 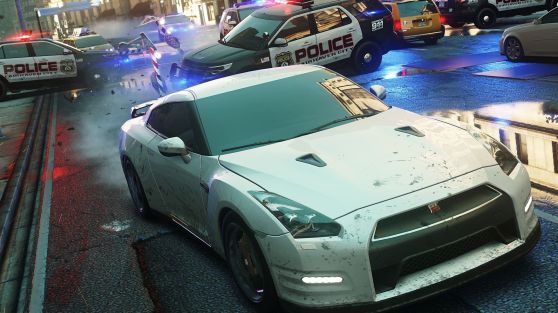 The secret ingredient of Most Wanted’s open world is its EasyDrive feature. It effectively cuts out all of the traditional menus so you can upgrade your car, find races, and even log on to the multiplayer mode while driving. It is sometimes a little unwieldy in the middle of a tense race, but if you familiarize yourself with the location of each option and practice driving and navigating the D-pad with the same thumb, you can swap out mods in a matter of seconds and instantly tune your car to handle better in whatever situation you’re in. Coming up on a shortcut through a dirt path? Just a few jerks of your thumb and you’ll have off-road tires. Then a couple more jerks later and you can swap back to track tires for better handling on the street.

Once you get the hang of it, EasyDrive is a very elegant alternative (despite my repeated references to “jerking thumbs”) to clicking through menus, and it goes a long way toward selling the open world that Criterion has created.

Before every race, Most Wanted treats you to a short intermission that shows you the starting area in various artsy filters and camera angles: cars speeding past fisheye lenses, images rotating at a vertigo-inducing 90 degrees, or police chases happening in reverse. It’s all pretty cool and it shakes up the driving around a bit. When you go from driving down a city street one second to a trippy visual that wouldn’t look out-of-place in a game like Limbo, it gets you weirdly hyped up for whatever competition is coming up next.

But as interesting as those are, the quick intros before taking on cars from the Most Wanted list are significantly crazier and very cool. They’re like the most badass Scion car commercials ever made, but instead of focusing on something dumb (like a Scion), it takes you through a dark Area 51-looking secret bunker that is either housing a Lovecraftian monster … or a Lamborghini. If the weird videos prior to normal races hype you up, these will terrify you. Maybe you don’t think you’re the type of person who would drool over a really cool car, but that’s probably because you haven’t seen one explode out of a mountain of tiny triangles and fly into space. 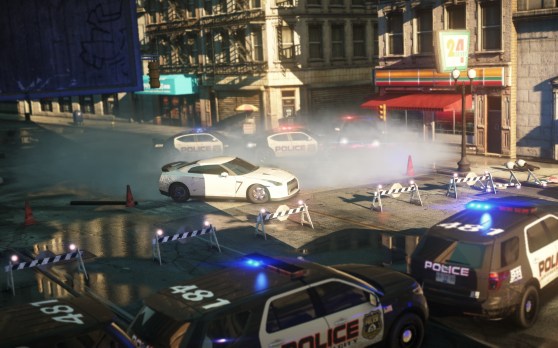 The racing has no personality

The problem is that the really cool and artsy stuff starts and stops at the beginning of the race. The rest of the game certainly looks great, but it’s all too slick and polished to give Most Wanted any real visual distinction. It’s not that I’m expecting any sort of forced “attitude.” The Fast and the Furious-style gritty street racer trend ended a while ago (thankfully), but everything in Most Wanted is so uniformly clean that it all blends together; nothing onscreen pops out or catches your eye as much as it should.

If you put Most Wanted up against similar racing games, the only way it would really standout visually is by being so indistinct that it loops back around and becomes distinct for that. “I don’t know what this is,” you’d say, “so that must mean it’s Need for Speed.”

It’s not fair to judge a game as something it’s not, and Most Wanted is not a Burnout game, but when Criterion has shamelessly lifted so many other things from their franchise, why not bring over even a fraction of its playfulness? This game feels like Criterion was given enough control to make whatever they wanted, but all of the flavor got watered out so it would feel like a proper installment of the historically ill-defined Need for Speed franchise.

This is a very particular problem, and by design it will not affect everyone who plays Most Wanted. Only Xbox 360 owners need to worry about this, and even then, only those with a Kinect. The voice commands in this game are great in theory. You can navigate all of the EasyDrive features using just your voice, freeing up both of your thumbs to focus on driving. You call out “change car” and the options to switch to a new car pop up; call out “retry” to start a race over; manage all of your unlocked mods; and pause the game without having to touch a button. No stupid hand gestures or modes where you play by steering an invisible wheel; it’s all just basic voice commands. I wanted so bad to put it up in the previous section of good things so I could highlight how developers could put things like the Kinect to good use … but then I started playing with someone else in the room.

See, the Kinect can’t distinguish who is offering voice commands to it. That means someone else in the room could be the one yelling out “pause” or “look around” (which swings the camera around your car in the most disorienting way possible) at an inopportune moment that could cause you to crash or miss a turn. That could be very bad, but some people probably have friends that won’t actively try to make them lose. Unfortunately, for whatever reason, the Kinect functionality for Most Wanted works in such a way that it interrupts words and phrases completely unrelated to playing as “pause” or “retry.” I ran into this issue multiple times, with the Kinect pausing the game and trying to customize my tires while I was having a conversation with my girlfriend or listening to a podcast.

Again, this is not a big deal for anyone but Kinect owners, but when a feature like this is highly touted in special trailers and on the box art, it seems important to point out that it has the potential to actually make your experience with the game worse.

Need for Speed: Most Wanted wishes it was a Burnout game. It has the right developer, the right approach to open-world racing design, and the right gameplay to make it a worthy sequel to 2008’s Paradise. Unfortunately, it’s not a Burnout game. It lacks the punch and thrill of that series, replacing it with something that can’t fairly be called “blandness” but is still too generic to set it apart from other  games in the genre. Most Wanted is a good game, and it’s still a lot of fun. It just doesn’t feel enough like its own thing, simultaneously too similar and not similar enough to those that came before it.

Also, if you have a Kinect, unplug it.

Need for Speed: Most Wanted was released Oct. 30, for the Xbox 360, PlayStation 3, PC, and PlayStation Vita. The publisher provided GamesBeat with an Xbox 360 copy for the purpose of this review.