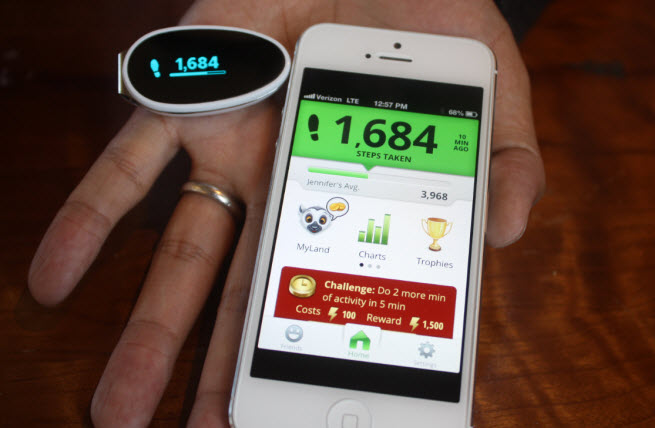 Striiv, the startup that makes a game out of making you more fit, has launched a small step-tracking device dubbed the Striiv Play Smart Pedometer. The devices goes hand-in-hand with a free iPhone app launched last two weeks ago and are part of the company’s strategy of reaching the largest number of users with its gamified fitness applications. 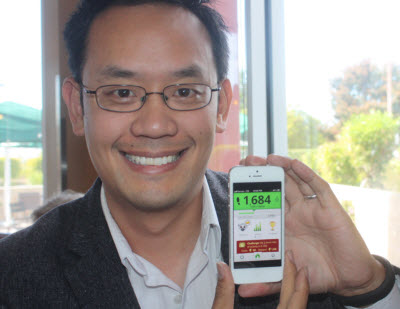 Gamification uses game mechanics to motivate people to become more engaged with a nongame app. In this case, Striiv’s app motivates you to become aware of your physical activity and try to increase it every day. The new device is smaller and cheaper than last year’s model.

The pedometer tracks the steps you take in a day. Then, it converts that to the number of calories you’ve burned. The iPhone app can do the same thing since the iPhone has an accelerometer that can be used to track your movement.

But the Striiv pedometer also has a built-in altimeter, which helps track the number of stairs you climb in a day, said Dave Wang (pictured), the chief executive of Redwood City, Calif.-based Striiv, in an interview with GamesBeat. The Striiv pedometer wirelessly connects to the free iPhone app and synchronizes it so that you can immediately see how far you’ve walked or run.

“We’re not just about tracking,” said Wang. “We’re about motivation and making fitness fun. This time, we’ve got the cost and power down in a smaller device that we believe can reach more people.”

Striiv also has a fantasy-oriented role-playing game called Myland. When you complete challenges, like walking up enough stairs to climb the Statue of Liberty, you get rewarded with points. You can use those points to spend on goods in the fantasy world. Striiv says its users interact with Myland 250 percent more than they do simply checking their activity charts.

Striiv launched its stand-alone handheld device last year with all of those previously mentioned features. But the new device is much smaller and has a tiny display with blue LED lighting that just tells you the basics about how many steps you’ve taken. 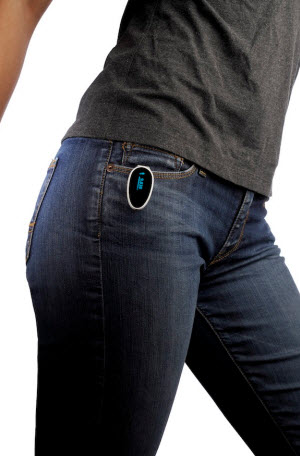 Striiv Play uses the built-in Bluetooth 4.0 technology to link with an iPhone 4S or iPhone 5, iPod Touch (fifth generation), or a new iPad. The always-on connection uses minimal battery life and lets people track their activity even when the iPhone isn’t nearby. In the past, the accelerometer in the iPhone couldn’t run in the background because it used too much battery power, but Apple has now fixed that.

It fastens to a belt, pocket, bra, or purse. You can read the screen in daytime or at night and view your steps, stairs distance, calories, activity minutes, time, and trophies. The Striiv Play device has its own rechargeable battery.

As with Striiv’s earlier device, you can use the Striiv Play to compete with your friends, sending them challenges to see who can be more physically active. The device is also integrated with MyFitnessPal, the calorie counter and diet tracker. The Striiv Play Smart Pedometer sells for $69.99 and is available at Best Buy stores nationwide, BestBuy.com, Amazon, and Striiv.com. The earlier Striiv device, with its own bright gaming display, sells for $99.99.

Rivals include Fitbit, Bodymedia, and Jawbone.