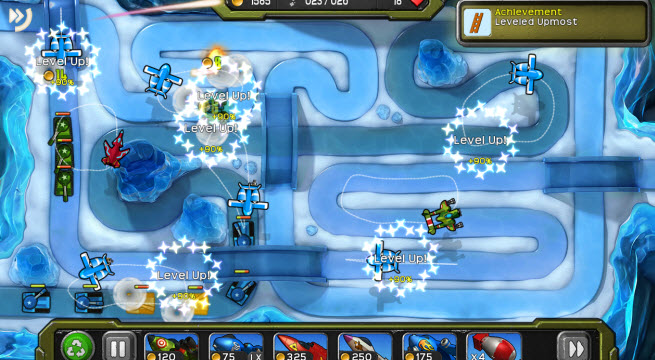 Air Pirates is part of an expansion into content creation. Amazon realizes that it needs exclusive content in order to make its hardware devices such as tablets more attractive and profitable. It also runs on Android, iPhone and iPad devices.

Air Pirates is an aerial twist on popular tower defense games, and it requires fast-thinking. Your job is to trace a flight path with your fingers to set your aircraft on course so they can attacking invading tanks. You can adjust your strategy on the fly.

It features Whispersync for saving your game progress to the cloud and switching between Kindle Fire devices. You can also use it to access GameCircle, which tracks achievements, high scores, and friends’ ranks. It’s a free-to-play game, where users can play it for free and pay real money for virtual goods.

“When we created Air Patriots we wanted to make a game that was easy and engaging, and the simplicity of drawing paths for planes was something we thought would appeal to players,” said Ernie Ramirez, the executive producer at Amazon Game Studios. “We think customers will find Air Patriots both familiar and fresh, with a degree of challenge that keeps them engaged and enthused to play more. We are very excited to bring Amazon customers Air Patriots today, and Amazon Game Studios looks forward to bringing our fans even more great games in the future.”

Amazon previously released Living Classics, an internally produced game for Facebook, as part of its expansion into games. The move is a bit of a risk as game developers will no longer view the company as a neutral party. Facebook, for instance, maintains its stance as a neutral platform owner because it doesn’t make games. But other platform owners like Nintendo, Sony, and Microsoft have long made games through “first party” game studios even while they solicit games from third-party game developers.