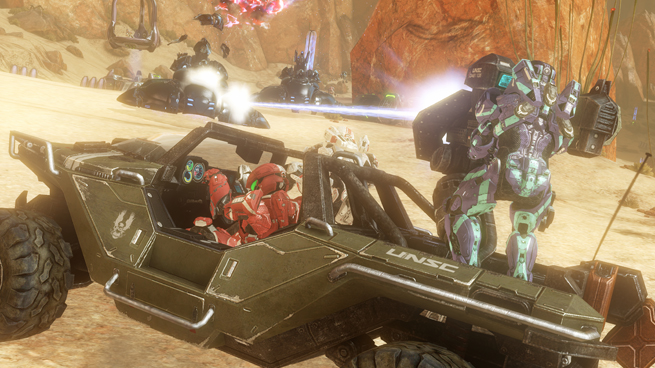 The latter might be the more interesting animal. Spartan Ops takes a four-player co-op game (while allowing for solo runs) and breaks it into a 10-part episodic series complete with its own characters, cutscenes, and a narrative arc that sends the UNSC Infinity back to Requiem six months after the campaign’s events. A new downloadable episode featuring five missions (no recycled assets, we’re told) will drop every week, free to anyone with a copy of the game and an Xbox Live Gold account.

It’s tough to judge Spartan Ops at this point. I blitzed through the first episode — the only one available for review — in little over an hour and found the missions diverse but uneven. At best, it handed me a quick-hit series of objectives with a well-thought-out progression and nicely varied challenges over wide-ranging maps. At worst, it locked the room and threw monsters at me. Hopefully, the other 9 episodes will capitalize on the potential.

Meanwhile, War Games zeroes in on the solo and team firefights Halo devotees show up for, set on mostly new maps. Ragnarok merely repaints Halo 3’s popular Valhalla with Halo 4’s brush and adds a bonus Mantis, but the rest are first-timers, and most offer rich possibilities. Some even feel tailor-made to specific modes. King of the Hill belongs on Haven, my favorite of the collection — an airy, two-story donut with a chewy, tough-to-defend center. I never enjoyed SWAT’s hardcore ways (or, coincidentally, repeated death and humiliation) until I took the new DMR through Settler’s idyllic, green murder hills and sneaky flanking cave. Call me a convert.

That specificity follows into two new game types, each deserving to become standard issue not only in future Halos, but in completely different franchises.

Regicide’s advanced free-for-all stands out from the pack, tagging the top-scoring player with an always-visible waypoint and an ever-increasing bounty. It’s an elegant autobalancing system, guaranteeing constant pressure on the leaders while opening the door wide for midrange players to pull off last-second, come-from-behind wins. And Extraction tweaks the standard control-points games by sending teams to capture and hold nodes until they “extract,” banking the point. That’s when more nodes randomly spawn on the map, and everyone goes nuts breaking enemy-held nodes, defending their own, or rushing to capture new ones. It’s a perfect fit for Meltdown, a figure-eight map that balances lots of space with lots of shortcuts.

But details sell the carnage better than ever before. Contextual music gets the heart thumping. Call of Duty-style ordinance drops come online at a satisfying clip. Hit a button to skip the respawn counter (and a kill-cam replay of your untimely death) and jump back into the action. Everything’s waypointed; teammates who have grabbed an enemy flag pop up with an “Escort” or “Protect” tag. Scumbags making off with your flag are marked “Kill.”

And finally, finally, Halo’s player customization makes it into the Modern Warfare era. Bling out your armor if you want, but the focus stays on unlocking and customizing up to five loadouts (transferable to Spartan Ops), complete with Tactical Package/Support Upgrade perks such as fast reloads, infinite sprinting, and bigger grenades. I built loadouts geared not only toward my play style, but specific to certain game modes. Spray-‘n-pray guns and heavy defense for King of the Hill. Scoped weapons and decoys for Regicide.

It makes all the difference. I’m playing my Halo, my way. The matches feel more interesting, too, as very different players bring very different (but still fairly balanced) Spartans to the fight.

Maybe the team at 343 just moved the needle here, but they moved it well. However, if you felt done with the series after Halo: Reach, odds are you’ll decide they didn’t move it far enough, and that applies across the board. 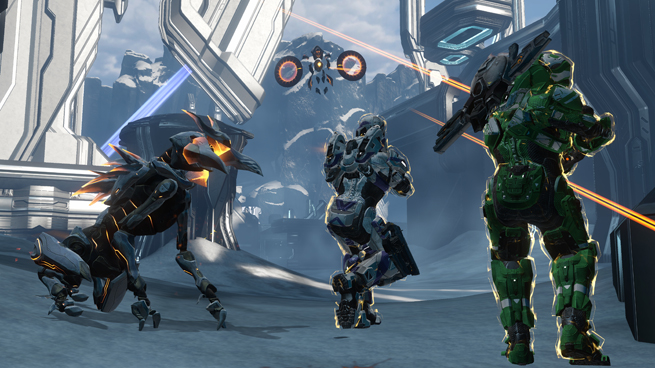 Things stay the same
343’s biggest misstep, if you consider it one, is that it successfully created the next chapter in the Halo saga by sticking to known formulas. In fact, veterans of Halos past will experience déjà vu concurrently and consecutively throughout Halo 4’s eight playable levels (bookended by nonplayable story chapters) and possibly deep into Spartan Ops, as well. Only occasionally does it feel like Halo’s showing you something completely new — at least, something new to Halo.

I started ticking off a mental checklist. Breakneck vehicular escape as the world explodes around you? Check. Scorpion tank section where you go sickhouse on the puny aliens? Double check. Can you ride a huge gondola through various ambushes? You can. Want to crawl through another sniper alley? You will. Do Covenant forces still love to fortify narrow bridges spanning bottomless chasms? They do. Who wouldn’t? And yes, Halo continues to rely heavily on mission structures that send you across enemy-infested territory to flip two or three switches before you can accomplish what you really wanted to do. Later variations on the “just one more!” message won a few eye rolls from me.

That said, the design of those individual encounters — right down to the mix, placement, and tactics of enemies — always gives you something meaty to bite into, and the overall flow hits a sweet spot few other games even reach for. You rarely find yourself stuck doing the same thing in the same way for long. Sure, it might feel familiar, but a reliably brisk pace always kept me sprinting for the next challenge with a malicious grin on my face.

Oh, and about that multiplayer. …