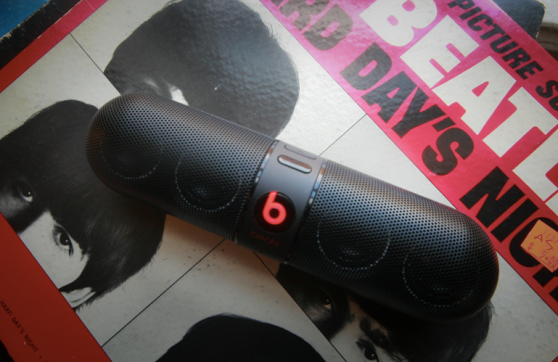 Roughly the size of a flashlight, the Beats Pill is Dr. Dre’s take on battery-powered Bluetooth speakers like the $199 Jambox. It’s a sound proposition in theory, but there’s a big problem: The Beats Pill sounds really bad.

For this you can blame the device’s size, which effectively eliminates its ability to reproduce the low-end of songs. The thumping bass of “Forgot about Dre”, for example, is all but gone, replaced a hollow, dull, and tepid tapping. Songs that are usually full of sound are tinny and flat coming out of the Pill’s tiny speakers. There’s a whole layer of the music missing from its output.

For any other $199 portable speaker, this would be understandable. Speakers are rarely an exception to rule that you get what you pay for. But the real problem with the Pill isn’t its poor sound, but rather that the poor sound is almost completely antithetical to Beats Electronics’s agenda.

The bad: The Pill’s off-Beat branding

From the beginning, Beats has built its brand on the argument that kids these days aren’t listening to music the way it’s supposed to be heard. That logic’s always been hard to argue with: iPod earbuds, for example, aren’t known for their aural fidelity, nor are most of the laptop speakers we tend to use.

The company’s effort caused excitement not only music lovers but among music makers as well. Finally, a company was trying to bring high-quality audio to the mass market. And while the effort has always smelled faintly of snake oil, the Beats manifesto has nonetheless remained compelling.

And herein lies the problem with the Pill, a device that is almost entirely a transparent attempt by Beats to enter the market of portable Bluetooth speakers. Simply put, this is a device designed around the upcoming holiday season, not hi-fi audio. 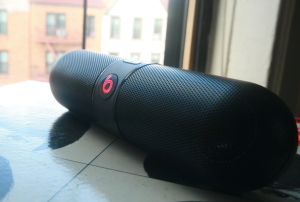 The good: Well-designed where it counts

It’s not all bad. The Pill is, on the whole, a well-designed device that oftentimes seems impossibly small for the kind of audio output its capable of.

As with other Bluetooth speakers, using the Pill for the first time is a somewhat magical experience, especially when you pair it with devices like tablets and smartphones.

One of the Pill’s most interesting features is near-field communications support, which allows users to pair the speaker to an NFC-ready device just by tapping the two together. The problem? Not many devices come with NFC support, which means the feature is likely to go largely unused.

Another nice feature is the device’s audio-out port, which allows it to double as a Bluetooth receiver for a set of external speakers.

If you’re considering buying the Beats Pill, it’s best to temper your expectations. While it’s not a terrible device, its small footprint means that bass-heavy songs will sound largely flat coming out of it. If you’re really looking for a Bluetooth speaker, you’d probably be better served by something like Jawbone’s Big Jambox, which offers much better sound for less than $100 more. (We’ve previously called the Big Jambox possibly the only speaker you’ll ever need.)

These things said, the Beats Pill is still a decent, but not exceptional, device that is sure to capture a great deal of the portable speaker market in spite of its flaws.