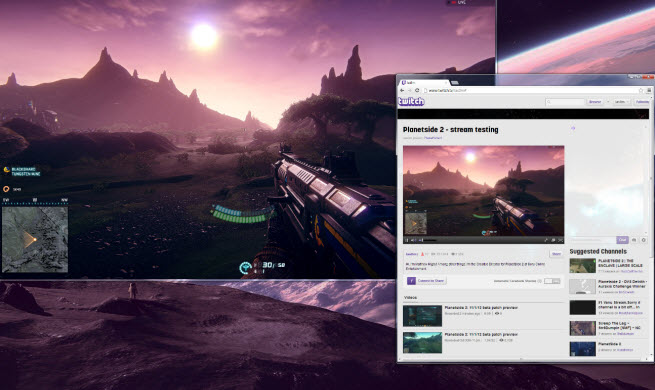 Score one for narcissism. Now you can livestream your very own video of your gameplay as you fight in Sony’s upcoming online first-person shooter game, Planetside 2.

This capability comes to you courtesy of Twitch, the largest video-streaming community for gamers, and Sony Online Entertainment. The sci-fi Planetside 2 will officially launch on Nov. 20, but the game already has more than 100,000 players who are blasting each other in the beta test. These gamers have already livestreamed more than 21 million minutes of gameplay, but they have done so with somewhat clunky tools.

With the new deal, the Twitch integration will be so easy that players will be able to live broadcast their game sessions with a single click, said Planetside 2 creative director Matt Higby in an interview with GamesBeat. You’ll be able to broadcast your own livestream to more than 20 million members of the Twitch community.

“This is a next-generation experience,” he said. “All of the competitive gamers want to share their experiences via Twitch.”

Planetside 2 is a high-profile free-to-play first-person shooter game set within a massively multiplayer online world. In it,  players gather in online frag fests, and it offers players plenty to brag about. Higby thinks that the livestreaming will prove popular not only among professional gamers but also among amateurs, too.

“Live broadcasting has evolved from a niche novelty to an integral part of the gaming experience,” said Matthew DiPietro, the vice president of marketing of Twitch. “By partnering with Sony Online Entertainment to allow gamers to stream titles like Planetside 2 directly to Twitch at the click of a button, the community to will continue to grow since the biggest barrier to entry has been removed. There is no easier way to broadcast game play to the Web than this.”

The beta version will be updated with a patch that enables Twitch at any moment. More games are likely to add the Twitch integration. Twitch had more than 23 million unique viewers in October, and those folks watched 1.5 hours per day. There are more than 200,000 unique broadcasters and 3,000 partners.

“We’re in discussions with the industry’s largest developers and publishers, so there’s no question that integrating turn-key live broadcasting into games is the future of this industry,” adds DiPietro. “With SOE being the first to illustrate the appeal of instant in-game streaming on Twitch, we couldn’t ask for a better partner to validate this movement.”

Higby said the Twitch livestreaming won’t slow the game down. That’s because the game is encoded for rendering as the person plays the game. Twitch takes advantage of that encoding and does not require that the game imagery be re-rendered for the sake of the livestream.