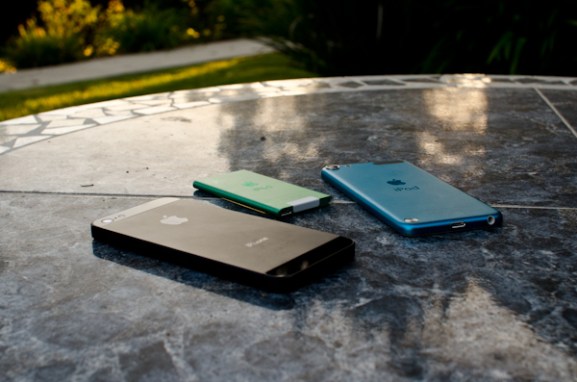 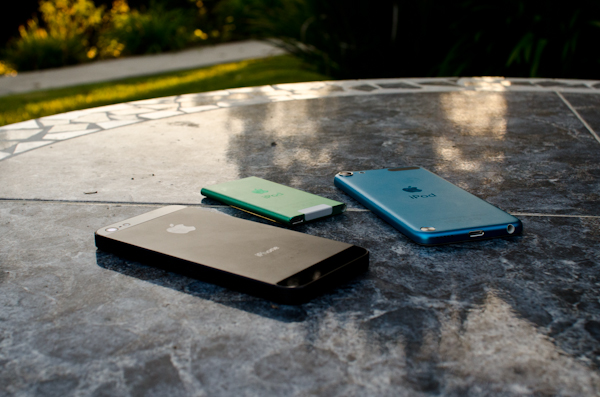 Thanks to the rise of smartphones, portable media players are practically nonexistent.  Apple is the only maker of portable media players that remains successful in the U.S., thanks to three products: the iPod Touch, the iPod Nano, and the iPod Shuffle. Along with the iPhone 5, Apple revealed the latest generation of the Touch and Nano at a media event in October, both remade after a year hiatus.

The iPod Touch is the best handheld media player ever. The iPod Nano has finally been perfected. And after spending time with both, I’m infatuated.

Both the iPod Touch and iPod Nano ship with a Lightning cable for data transfer and charging and a pair of EarPod headphones without a microphone. 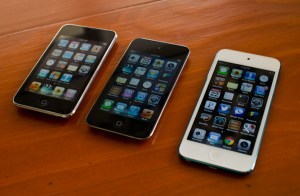 Unlike past models, this iPod Touch is great fit for your hand. It’s a huge improvement over the older iPod Touch thanks to a unique design that, from a distance, looks similar but is completely unlike any other Apple device.

Instead of a glass-metal or glass-glass build like on the previous iPod Touch or iPhone 4/4S, the new Touch has a soft aluminum shell that is an extremely thin 0.24 inches. That meager thickness — combined with a minuscule weight of 3.1 ounces — makes the Touch comfortable to hold and light in the pocket. It’s so comfortable that it feels better than the iPhone 5. This is the best-designed handheld device I’ve seen.

The reason for this is threefold: the extreme and completely uniform thinness of the frame, the naturally rounded edges, and the solid yet feathery weight. These three elements make the iPod Touch easy to grip one-handed while simultaneously offering a better range of motion for thumb use. The thin frame of the iPod Touch has the same range of motion for the thumb as the iPhone 4S. The iPhone 5 is a bit taller and much thicker with square sides, which limit how far you can reach across the screen. The iPod Touch has better screen reach than the iPhone 5, so it’s easier to use one-handed.

Being able to choose different colors for the iPod Touch is the other major change that consumers will appreciate. I received more than a handful of complements and questions while testing the iPod Touch around Los Angeles — some about how it feels, but mostly about the range of colors. A half-dozed strangers called the tested blue iPod Touch “sleek” and “sharp”; the Touch also comes in white, black, yellow, and pink, as well as red (online only). The only thing I heard more than compliments on the iPod’s design was actually a question: when will the iPhone start offering color options? 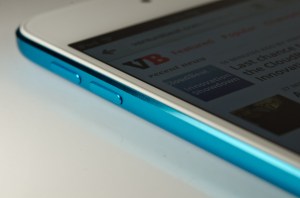 Above: The machined edges of the iPod Touch look stunning, and the separated volume buttons feel even better than the iPhone 5’s round-button design

One other major improvement to the Touch is the new IPS (in-plane switching) display, a technology widely considered one of the best for LCD screens. The iPod Touch has historically shipped with standard LCD panels that were fairly good but never iPhone-quality. Now video and photos look excellent onscreen. It’s not as good as the iPhone 5, but you would have to put both side-by-side to notice a difference. The 1,136-by-640 display is the first Touch to offer a widescreen aspect ratio: no more letterboxed HD video. It’s excellent for watching full-length films thanks to outstanding light and color contrast, as well as the fact that widescreen video fills up the entire screen.

This iPod Touch has a much higher-quality camera than its predecessor. The 5 megapixel shooter takes clear stills with excellent colors and minimal blurring. It’s the same camera from the iPhone 4, which is two years old, but it’s still powerful for a device of the Touch’s caliber. Unlike competing media players or past Touch models, this iPod is capable of quality photography and recording HD video (up to 1080p). Take a look at some sample shots below.

One last piece is the loop, a pop-up metal slab on the bottom corner of the Touch where users can hook a wristband. It’s a neat addition, but users who don’t care can just forget it exists.

The voice application Siri is available on the iPod Touch, but it’s an unimportant feature. I’ve only found it useful for setting alarms or occasionally showing off to friends at home. Without a cellular data plan, you can only access Siri through known Wi-Fi networks, which makes it almost excessive on the Touch.

As Devindra pointed out in his iPhone 5 review, the Lightning connector is a great upgrade, even if it does make all of your current iPhone/iPod cables obsolete. The small connector is about the same size as a MicroUSB connector and will undoubtedly work on future iOS devices (that is, until Apple replaces it with something else). The overpriced and different connector limits what accessories the iPod can connect to without the expensive adapter (it’s sells separately for $30), but they are also much easier and much more convenient to use than the older 30-pin connector.

Battery life is generally good for media playback with 40 hours of audio and eight hours of video.

The Bad: Everything old is new again

Outside of its design, all major improvements to the Touch come from older Apple products. The camera comes from the iPhone 4. The A5 processor is the same as in the iPhone 4S and iPad 2. The machined edges and larger 4-inch display come straight from the iPhone 5. As distinct as this design is, every other aspect of the iPod Touch is identical or very similar to older devices.

The Touch just doesn’t have anything new.

The lack of technological improvement doesn’t mean that this latest iPod Touch isn’t an exceptional device, far from it. It actually goes to show just how powerful Apple’s hardware components are. But this also points to a lack of innovation. The only advancement with the Touch is the design; everything else is a melting pot of older parts. What is really stifling is users who want an equally powerful device to the current iPhone can’t get one. In the past anyone could buy an iPod Touch as powerful as the iPhone.

The price of thinness 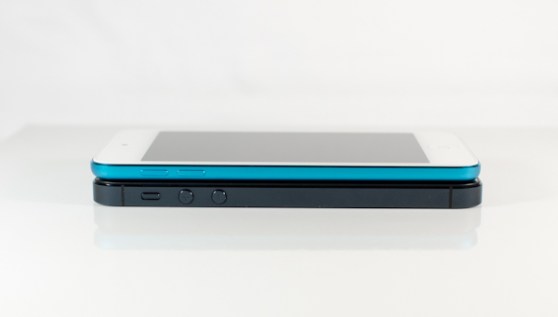 Above: The iPod Touch on top of the iPhone 5

Even though one of the best features of the new iPod Touch is its comfortably tiny frame, it comes at a price: It has no ambient light sensor. This sensor adjusts brightness settings automatically based on the light in the room. In an email published by idownloadblog.com from Apple’s SVP of Worldwide Marketing Phil Schiller, the Touch is too thin for the sensor.

Past iPod Touch models have included the sensor, which makes this downgrade of sorts very noticeable — and very annoying — to past iPhone or iPod Touch users. The lack of the ambient light sensor is only exacerbated by the lack of a quick way to adjust brightness settings.

The thinner design also means a thinner battery. The iPod is optimized for media playback, but not gaming or intensive app use. In my benchmark testing, the iPod Touch only lasted two-and-a-half hours. Real-world use revealed that the Touch would last for up to four hours of high-end gaming with apps such as like Infinity Blade 2, FIFA 13, and Street Fighter X Tekken. Simpler apps like board games don’t drain battery life significantly, but gamers will find that the iPod Touch doesn’t last as long as competing gaming devices like the PlayStation Vita or Nintendo 3DS.

It’s also expensive. The starting price for the new Touch is high at $300. Historically, the Touch sold for $200 with the same hardware to the iPhone, but Apple is still selling the older 4th generation Touch for $200 two years after its first release. Interested buyers can choose between the two-year old Touch or the newer model for $300/$400 for 32GB or 64GB capacities, respectively. Nothing’s wrong with the pricing; the problem is users can’t buy a less expensive 16GB current-generation iPod Touch for $200. This forces consumers to choose between an old overpriced iPod or the latest and more expensive Touch personalized with a color. That pricing scheme is obnoxious and perhaps even insulting.

The iPod Touch never offered the option to view the battery life numerically like the iPhone and iPad do. Because Apple markets the Touch as a gaming device and media player, it only seems fair that users can see definitively how much battery life remains on the device without a vague icon. For some reason, this still isn’t an option.

With the announcement and upcoming release of the iPad mini, it’s fair to ask which one is right for you. Aside from the size of the devices (4-inch versus 7.9-inch), the two are nearly identical. They have the same processor, same RAM, same cameras, and the same Lightning connector. There are only three hardware differences: the size (and consequently the weight), battery life, and screen resolution.

The iPod Touch is not a tablet. While we haven’t tested the iPad mini just yet, from what we’ve seen it’s better suited for reading and web browsing, evidenced by the non-widescreen 1024-by-768 resolution display. The iPad mini is a handheld tablet that you can use for media functions or games, but it isn’t specifically designed for those functions. The iPod Touch is arguably better suited for gaming, thanks to its higher resolution widescreen display and smaller size.

Why bother with the iPod Touch if the iPad mini is only $30 more? That’s a reasonable question. Both are do-anything devices, but portability and gaming are the strengths of the iPod Touch. The iPad mini will likely have better battery performance and offers cellular data options.

The decision between the iPod Touch or iPad mini is a question of what’s better for you. I believe that the iPod Touch is a better media device for the price — $300 versus $430 for an equivalent iPad mini — but that anyone interested in a larger device who isn’t concerned about memory capacity shouldn’t hesitate to buy the iPad mini instead.

Wrapping up: The best media device 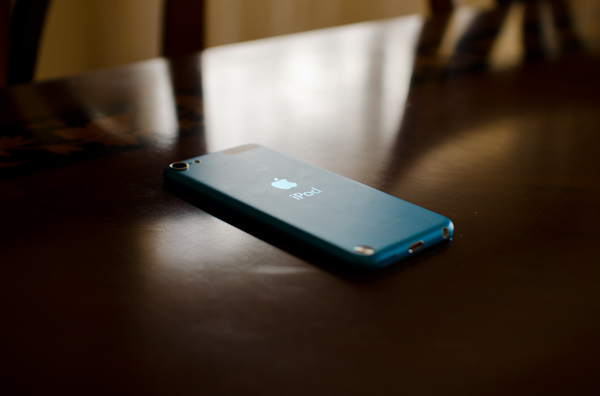 The iPod Touch is by far the best portable media player available. While the same could be said about all past models, this one is different because it is more impressively built than even the iPhone 5. Even with old components, this iPod Touch is the first device of its class that is a true do-anything device. It’s a great media player, takes great photos and video, has a great-looking IPS widescreen display, and the design is to die for. It does everything but makes calls, just as intended. The iPod Touch is one of the best handhelds ever.

But it’s far from perfect. The starting price of $300 is too high; Apple doesn’t have a cheaper 16GB model. It’s as powerful as the iPhone 4S, not the iPhone 5, practically making the Touch a generation old already. The camera comes from the two-year old iPhone 4. It lacks an ambient light sensor. Battery life is lacking. These limitations don’t make the iPod Touch worse than the competition, even if nearly everything is a year or two old. But it begs the question: why not just get an iPhone 5? It’s better in nearly way and even costs less (minus the contract). For this price it’s reasonable to expect a device that’s on-par with the iPhone, but that’s not the case here.

The iPod Touch is one of the most impressive gadgets you can buy today. It’s fast and very capable, and is better designed than the iPhone 5. There is no $200 16GB model available, and the starting $300 model is awfully expensive for the base 5th generation iPod Touch. Holiday shoppers might cringe at the price, but it’s an excellent device worth giving (or receiving).