In case you’re curious why there’s no 16GB Surface, here’s the answer.

Microsoft officially revealed today that roughly half of the storage space of the 32GB Surface is used by Windows RT itself.  This leaves Surface users with 16GB for all of their personal files, a tiny sum for most computer users in 2012. 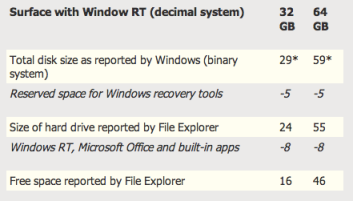 But why does Windows need all of that space? As you can see from the screenshot to the right, it’s all about recovery software, Microsoft Office, and other built-in apps.

To understand how crazy this is, consider that on the 16GB Nexus 7, Android uses up a little over 1GB of space for system files. Same goes, roughly, for iOS 6 on the iPad. So while no device comes entirely with its advertised storage, few devices go to such extremes as the Surface.

Fortunately, Surface owners have the option of buying SD cards and USB sticks to supplement, although the better solution at this point may just be to go for the 64GB Surface, which is left with 46GB of space after the Windows RT install. Another solution is to sign up for Microsoft’s cloud-based SkyDrive storage, which is free for the first 7GB.

In our review of the Surface we found a lot to like , even though it didn’t fully live up to its potential.