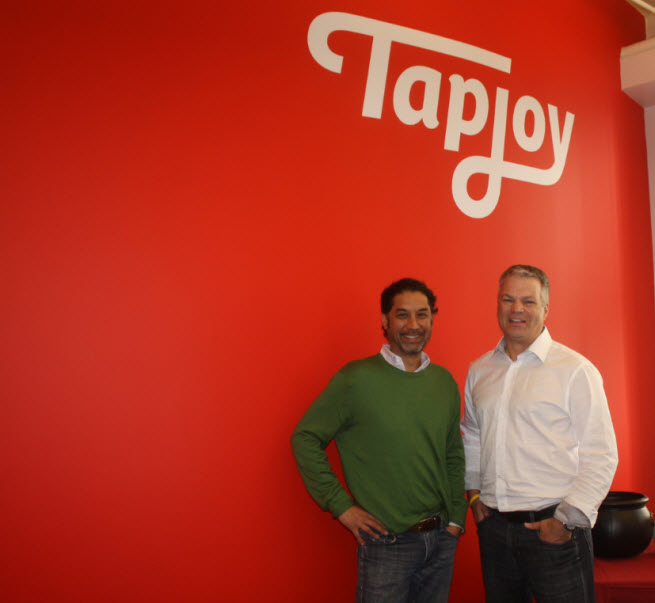 Tapjoy has done surprisingly well as a major ad network for games, with incentives for consumers to install more apps.

Behind the scenes, Tapjoy inserts ads into apps. Those ads are targeted at consumers who enjoy similar apps. If those individuals install the apps that are recommended in the ads, then the advertiser pays Tapjoy and the developer for the installation.

It works, because developers have so few good options for getting their apps in front of consumers. This business grew sales from $20 million in 2010 to more than $100 million in 2011, despite being tripped up when Apple banned incentivized downloads (which appeared to give people the motive to download apps they didn’t want to use). Still, Tapjoy is going strong and its network of developers now has more than 100 million monthly active participants, and it has reached more than a billion mobile devices.

Now, the San Francisco company has shifted much of its weight to Google’s Android mobile devices. It recently launched its own Tapjoy Reconnect portal for getting consumers to come back to an app, and it is expanding into new territories. We caught up with Shah and Tapjoy chief marketing officer Peter Dille (pictured right) in a recent interview. 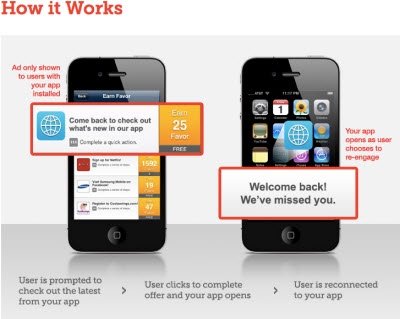 GamesBeat: It’s always hard for me to describe the biggest part of what you guys do. Maybe if you could start there.

Mihir Shah: Well, what is Tapjoy? We’re a mobile network that’s built on the value-exchange concept. It’s an ad model that allows consumers to discover and engage with premium content in exchange for engaging with premium advertisers. That’s the focus of the business. It benefits everybody. Consumers get a high-quality, double-opt-in way to engage with content. Advertisers have a targeted way, which is driven by self selection, to engage with their target audiences. Developers, far and away, make the most ad-funded revenue through this model.

As we’re finding globally, app stores and platforms benefit because they get access to great content. Content can make more money and connect with the right consumers, as illustrated by our deals with SK Planet in South Korea and GPhone in China. We’ve done broad platform deals with them to bring our model and the content that leverages our model into their app stores. We talk about the three constituents — consumers, advertisers, and app developers — but I would also say that there’s an underlying fourth, which is platform traffic, because consumers get this great model. Therefore, the developers get more revenue and the advertisers get more targeting.

GamesBeat: How about incentivized versus non-incentivized? What does that do?

Shah: You call it “incentivized.” We call it “value exchange.” It’s the core. We think that is what works on mobile. My strong point of view, as you know, is that display advertising is a legacy model for PC-based browsing. That kind of passive advertising through the PC, where you have a mouse and not your finger, makes sense. It doesn’t make sense on mobile. It has to be an opt-in model. Whether you want to call it incentivized or not, our model is opt-in. Users request the advertising. They request it because they get some value in exchange. In my opinion, it’s no different from Google advertising or TV advertising, where you’re fully aware that you’re watching The X Factor for free because the advertisers sponsor it. 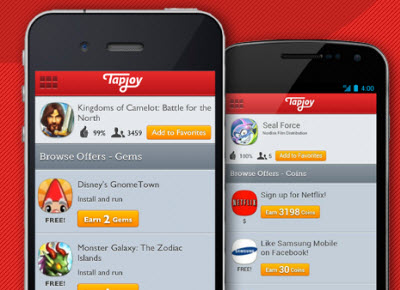 Peter Dille: From my perspective, having been here 15 months now, consumers and developers love this model. There’s a constituency within the Madison Avenue brand advertisers. Some of them say, “Incentivized? Not sure how that works. What context is my brand being seen with? What shoulders am I rubbing up against?” Long story short, they didn’t really understand it.

If I were to say what the biggest shift has been, it’s that I see a lot of that crumbling away. They get it. They understand mobile is different. They spend more time with mobile itself. I was at a dinner a few weeks ago put on by The I.D., and people were saying, “Yeah, I have no issue with that.” We’re seeing great momentum from our brand ad sales force team. That’s been a shift.

Shah: We hear it on a daily or weekly basis. We ask major global brands how to become part of their media mix. “Tell us, is it the value exchange model? What is it?” It’s not the value exchange model. It’s shifting budgets. It’s turning the ship such that they have the right media mix on mobile. I completely agree with Pete. One of the big news stories here is the ad shift that we’re seeing, embracing our model.

The second thing is, we want to talk to you about Tapjoy.com. We have an exciting release coming out in 30 days. It’ll be the first of a number of incremental releases. What that’s about is continuing to move forward around discovery. I have a very strong point of view that discovery in mobile and connected TV is fundamentally different from the Web. The friction associated with downloading an app on mobile is very high. It’s not like you just hit the back button if you get the wrong piece of content. You have to go through the whole download process. Driving far better discovery based on what the user wants is hugely important. Tapjoy.com’s version two that’s coming out in November will start moving us significantly in that direction, where we’re providing a channel experience, in effect, for app discovery. We’re very excited about that.

About 40 percent of our user base now is in the U.S. Sixty percent is international. We are seeing significant growth and very healthy economics through the model from South Korea, China, Southeast Asia, Western and Eastern Europe, across the board. We don’t see any end in sight. We think the tailwinds are stronger in 2013. A lot of that has to do with continued Android penetration globally. 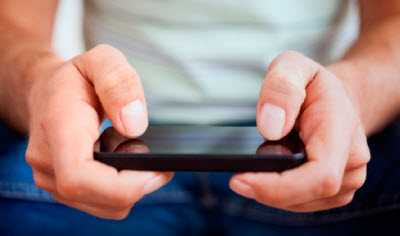 GamesBeat: Are you guys willing to part with anything? You’re bigger than $100 million dollars, or whatever it is.

GamesBeat: Who, then, winds up being your competition, most directly?

Shah: Right now, our position is pretty unique. To Pete’s point, we are the premium partner for global app developers, not only for distribution but for an ad-funded model. The combination of our value in distribution and the ad-funded model creates really healthy partnerships. From an ad standpoint, at scale, we’re unique. We drive a value exchange. We allow that unique self selection and targeting from an advertiser to reach their target audience. From a consumer standpoint, again, we’re unique. We’re the only global company that has a direct consumer offering, as well as a network offering, that consumers can use. An app user can choose to interact with Tapjoy through other apps, or they can come directly to Tapjoy. We have a unique global proposition to all of our constituents at scale.

By the way, a couple of exciting points…. This quarter, we will hit a billion devices, to give you an idea of the scale. We are firmly at 100 million active users per month. When I say active, I mean active. They’re interacting with the value exchange. All of those are multiples over a year ago. Our point of view is that users are embracing this model. Advertisers embrace the model. That healthy value connection between consumers and advertising hugely benefits the developers and platforms. You get more engaged users and more engaged advertisers. 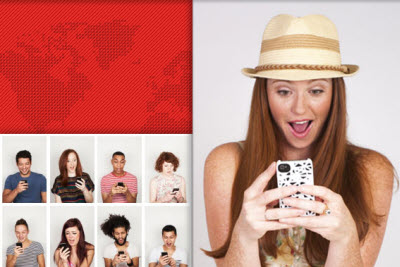 Shah: You’ve seen the studies, independent studies. From a display-advertising standpoint, when you’re leveraging the old PC model in mobile, 50 percent of the clicks are fat fingers. They’re by accident. It doesn’t work.

So what works? It’s an opt-in model. It’s a user requesting an app to access additional content. No different from requesting to pay through a pay model. It’s a double opt-in. I want to see an ad, and I choose the ad I want to engage with in order to get access to content. That kind of discovery and engagement works in this new mobile and connected TV world. We are focused on building that.

GamesBeat: How large is the market now, in your view?

Shah: The market’s huge. We define “the market” as the worldwide mobile advertising market. That market is enormous. Now, it’s still only two percent of all advertising spent. It may be three percent this quarter, but two percent is the latest number. These aren’t our numbers. These are coming out from reputable sources. Even at two percent it’s huge.

This is one of those markets that companies like Tapjoy have achieved scale and have a loving fan base. We don’t have headroom issues because of market size. We have operating scale issues, like any growth company. We were 50 people last year. Tapjoy’s now 300 people. One hundred of those are outside the country, 200 are in the U.S. From a corporate standpoint, we are in a growth phase. We’re no longer a startup. We’re a private-growth company, scaling fast. We don’t have issues about market headroom. Our issues are about how we meet the demands of our consumers, our developers, and our advertisers on a global scale.