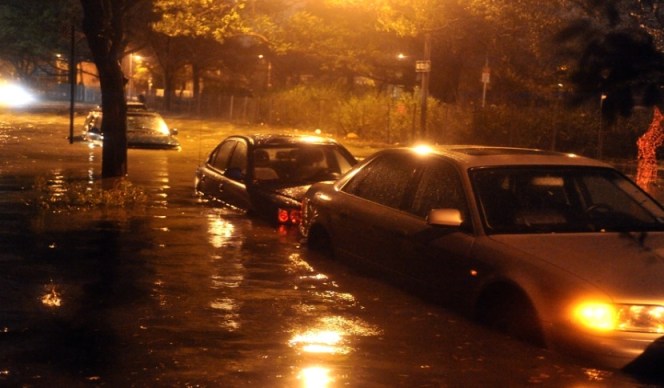 I was walking along the beach on Maui recently and was stopped by a security guard in a golf cart. He told me I needed to be back in my room by 10:30 because a tsunami warning had been issued for all of the Hawaiian Islands. I checked my phone and, sure enough, when I clicked the Google Now link, there was information about a tsunami warning.

I discovered through my Twitter friend Nicholas Augusta (who lives in Hawaii) a number of Twitter accounts for local emergency management agencies to follow. If it hadn’t been for his initial seeding, I would have had to actively seek out those accounts.

As the Internet becomes a bigger part of our everyday lives, companies with a lot of reach have a responsibility to do more to keep people informed during emergencies. Television and radio have the Emergency Alert System (successor to the Emergency Broadcast System.) Although the tsunami turned out to be a non-event, it annoyed me that in 2012 I found out about the tsunami by running into a security guard on the beach rather than the 2-way, location aware communications device in my pocket. When I looked deeper at the Google alert, my options for modifying the alert were to make it a lower priority or turn it off altogether. There was no way to make alerts about possible life-threatening emergencies more important than sports scores.

The technology exists to provide real-time data to people who need it the most. Here are some thoughts on what various companies could do, based on their specific assets:

Apple. Real-time alerts on all iOS devices when there is an emergency. Emergency road closures and evacuation instructions in iOS maps. Space to charge gadgets at Apple stores that are open. (If that sounds ridiculous, consider that Chase opened its branches in Manhattan to let people charge up.)

Google. Android devices should have a modal dialog that alerts users to the emergency. The Google bar across most properties should contain an alert notification. (Something distinctive and obvious, not like the Google Plus notifications I’ve trained myself to ignore.) Google could also update maps and routing based on road closure information from civil authorities. One of the common complaints I heard during Sandy from New York Mayor Mike Bloomberg and Newark Mayor Cory Booker was that people were misusing 911. The Android dialer could be used to educate people on what is 911 worthy as well as provide the non-emergency number. (Bloomberg has it relatively easy because his non-emergency number is 311. Booker’s is the much harder to remember 973 733 4311.)

Google could use its extensive mapping resources to help rescuers and first responders find people in emergency zones. Maybe even send YouTube videos like Chris Christie’s “get the hell off the beach” to people known to be in evacuation areas.

Facebook. Like the Google bar, the Facebook bar could contain emergency notifications. I would modify news feed to highlight content from the affected areas so I can automatically see how my friends there are doing. Regular Facebook users in the affected areas could be highlighted if they don’t check in, serving as a prompt to check on them. Facebook popped up an Election Day alert at the top of my feed today, asking me if I voted and offering a polling place locator. Affected individuals could be offered resources such as emergency shelters. Like the “I’m a Voter” button, there could be an “I’m OK” button to quickly let your friends know. I saw a number of my friends posting that they had a spare room to lodge those who were homeless or that they had power and friends could come over to charge up or watch a movie. Those updates could be offered as free promoted updates.

Twitter. Twitter offered emergency agencies free promoted tweets during Hurricane Sandy. During extreme events, I consider it appropriate for Twitter to automatically follow certain accounts, as long as it can be done on a geo-targeted basis. The latest (or a designated) tweet from emergency agencies could be pinned to the top of my timeline instead of flowing through the usual river. Likewise, if I were to go to Cory Booker’s Twitter page, I’d see his most important message at the top, not necessarily his latest heroic effort to play Superman for a constituent.

Amazon. For storms like hurricanes that have a fair amount of notice, common emergency supplies could be positioned at distribution centers just outside of the anticipated storm zones. Shoppers could be given the option to purchase emergency supplies for people who are affected or add a Red Cross donation to their cart. A group in New York is using an Amazon wedding registry to help others buy needed disaster supplies.

One of the more impressive efforts I saw with Hurricane Sandy was Chase updating its branch locator with hours. Branches that were still closed due to the storm were labeled closed. Branches that were open had their modified hours displayed. That kind of near real-time data can be valuable in emergencies.

Disaster relief isn’t limited to just the big companies or the big ideas. There are a lot of little things that can be done, if you are creative and take the time to think about it. After 9/11, Verizon offered people who had voicemails left for them by someone who perished in the attacks the option to receive a copy of the recording.

Here are a couple of other things I thought companies could have done, but didn’t:

Foursquare. Use check-in data to publish lists of businesses in the affected areas that are open. Not just in the app (these would have shown up as trending), but automatically generate a list as a public service. Often it’s hard for people to figure out what’s open when there are systemic outages. This helps consumers find essential services and also helps businesses get back on their feet by bringing customers in the door. American Express could actually do this much better, with its larger data set. (But it would include only American Express merchants and would leave out any merchants who were without credit card services and handling transactions manually.)

Uber. Uber got some negative attention for raising its rates during Sandy to attract drivers to the Uber platform. (See my thoughts on that move.) But the company could have offered free rides for people who were volunteering to help the city get back on its feet.

It’s important to think about these things before an emergency. Chances are, there’s an opportunity for your business to do good to help keep people safe or help them get back on their feet.

People are often looking for help and resources during times like this. It’s an opportunity to put your company out there in the best possible light. More importantly, we can use technology to do good.