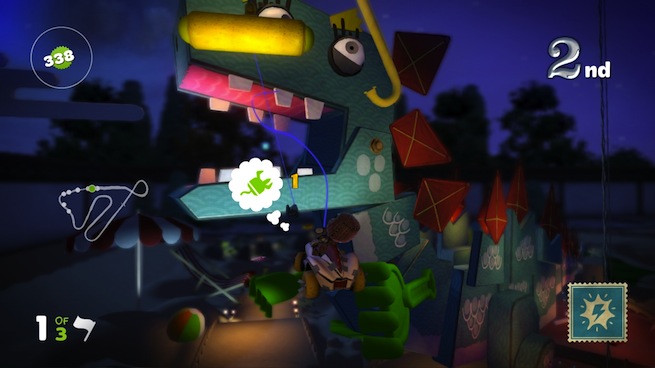 My cousin has a saying: “Speed is your friend.” Though this mantra has led him into countless crashes and broken bones while mountain biking, he still swears by it. It’s something I kept thinking about while playing LittleBigPlanet Karting, where reckless driving is a requirement. Otherwise, you couldn’t go fast enough to launch off a ramp, swing through the air with your grappling hook, and pull off a few tricks before you (hopefully) land.

Developer United Front Games is no stranger to kart racing: It released ModNation Racers in 2010 for the PlayStation 3. It’s also a game that espouses a “Play, Create, Share” philosophy of user-generated levels similar to LittleBigPlanet’s ethos. Out today for the PS3, LittleBigPlanet Karting expands what UFG started with ModNation Racers with even more tools and options for budding level designers to experiment with.

Factor in the whimsical story mode and a seemingly endless level of customization and you’re looking at one of the most entertaining kart racers ever made. 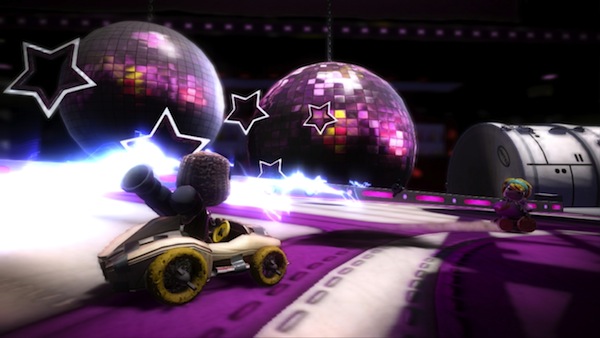 It might as well be LittleBigPlanet 3
United Front Games not only replicates the charming look of LittleBigPlanet but it also nails its feel. The playful sense of humor ripples throughout all corners of the Craftworld (the universe that all LittleBigPlanet characters inhabit), where the arrival of the Hoard — a special breed of Sack people who look like they crawled out of a Tim Burton film — causes chaos as they mysteriously start looting everything they see.

The driving controls are tight and responsive, so much so that I’m convinced LittleBigPlanet is far better suited as a kart racing game rather than a platformer. Even the sound of your wheels hitting the digital pavement (assuming you’re not using any hovercraft karts) is satisfying; it lends a sense of weight to your vehicle, and you do feel like you have full control as you drift through tricky curves or attempt to do a 720-degree aerial spin. It only takes a few seconds for these mechanics to click, and you never feel like the game gets in the way of your driving.

And then we’ve got the vocals of English actor and comedian Stephen Fry. The franchises’s narrator lends his voice again to intros of story levels or teaching the fundamentals of Create mode. His words are dripping with enthusiasm and affection, and I can’t help but feel smarter after listening to many of his educational speeches in the game. If I could, I’d pay an obscene amount of money to have Fry read me a bedtime story every night for the rest of my life.

Dizzying level of customization
Just like your Sackboy (who you can outfit with costume pieces, materials, and objects), your kart is open to a wide assortment of customization options. Feel like flying around inside the mouth of a dinosaur? Slap the hovercraft suspension to your vehicle and off you go. Want to drive a tank instead? You can instantly replace the wheels of any of the kart models — gradually unlocked from playing the story mode — with some serious treads. It’s up to you.

Game design 101
The deceptively simple Create mode is more than a track designer: You can build levels that have nothing to do with kart racing. Since the LittleBigPlanet Karting servers aren’t live until release, United Front Games provided a small sample of user-created levels from its team. And the variety is crazy: One level is a top-down tank battle where you must capture nodes to earn points. Another is a card-flipping memory test. And one creative person managed to make a simple tower defense game, complete with a handful of enemy waves and different towers.

I have no idea how they did it. But I’m sure you can find the answer by watching all 57 of the short tutorial videos explaining the various functions possible in Create mode. You can modify A.I. behavior, cutscenes, music, animated objects, and much more with a few button presses. United Front Games used these very same tools to design the levels in the story mode, so Create mode is definitely powerful, if somewhat overwhelming.

But you can create a basic no-frills racing track in a few minutes. You do this by “painting” over an area with giant rollers and brushes, an intuitive mechanic that makes it easy to understand.

Inventive weapons and strategies
LittleBigPlanet Karting has a few unique power-ups that mix up the flow of a race. One of my favorites is the flying boxing glove, which is helpful if you’re trailing behind, catapulting your kart through the track with incredible speed. And the Paintinator Gun is ideal for hitting multiple targets … and really annoying for any friends or strangers you’re playing with online.

Traditional staples like speed boosts (represented here with jet packs) and tricks also get a shiny coat of LBP paint. They add interesting dimensions to your overall strategy: Do you keep your weapons to shield yourself from other attacks — achieved by firing it backward at the right time — or do you just chance it and let it fly? This is especially important in the last leg of a race, as the wrong decision could cost you your lead. 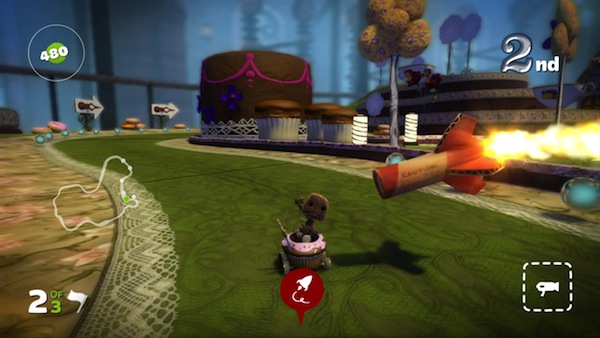 It feels a little too familiar
Parts of LittleBigPlanet Karting can feel like you’re playing through a “greatest hits” selection of levels from previous LBP games. Some familiar faces, along with song choices, make a repeat performance. As you progress from planet to planet, you’ll also notice a consistent layout of races, battles, and objective-based minigames (such as boss fights). The number of these levels vary, but it makes the game feel predictable after a short amount of time.

The on-disc content is a little anemic. Once you blow through the campaign, the only reason to go back is to collect prize bubbles: the “VS.” battles that unlock from finishing these tracks are only useful if you plan on playing with other people (online or off). You’ll have to wait until the community gets a hold of LBP Karting to play some new content — that, however, shouldn’t take long.

Difficulty spikes
To progress through the story, you have to end up somewhere on the top three at the end of a race or battle. While challenging, you can easily pass them on the first try. But about halfway through the game, the A.I. felt a lot more aggressive as they kept knocking me off of my coveted spot only seconds before finishing a level. I replayed one race four times with the same result before I finally scraped by with a win.

Part of the blame is with the power-ups: If you’re falling behind, you (and the A.I.) have a greater chance of earning speed-boosting weapons, like the flying boxing glove, to help you catch up. It’s a good idea in theory. But when you see the entire bottom third of racers all activate the glove at the same time as you do, it looks a little ridiculous. You just end up in the same place as before. 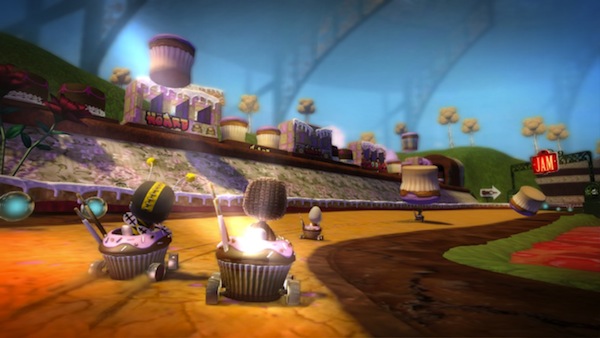 LittleBigPlanet Karting is in a weird place. It’s technically a spin-off, but it has enough features to rival the first two LBP platforming games. United Front Games has done a phenomenal job of re-creating the look and feel of the Craftworld while applying its kart racing expertise with imaginative tracks and responsive controls. And the Create mode is nothing short of stunning, even if I don’t have the patience for it. Depending on how the community of players respond, it might be the only kart racing game you’ll ever need.

LittleBigPlanet Karting is available Nov. 6, 2012, for the PlayStation 3. Sony provided GamesBeat with a copy of the game for the purpose of this review.