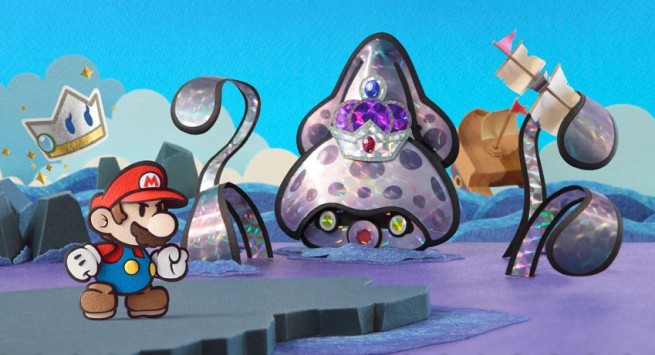 I hate one-time-use items in games. If I get an item that I can only use once in something like The Elder Scrolls V: Skyrim, it’ll sit in my inventory forever. I’m afraid that if I use it, then I won’t have it when I really need it. On the other hand, I love Paper Mario games. The series combines humor, color, and character in a supremely playable package.

So, I was worried when I found out that Paper Mario: Sticker Star, available Sunday, Nov. 11, for the Nintendo 3DS, features a battle system in which one-time-use stickers replace traditional stats, leveling, and equipment. That didn’t sound like fun to me. Actually, it’s a nightmare scenario for my neurotic brain.

I hoped that developer Intelligent Systems would find a way to turn this sticker gimmick into something fun. After all, this is the developer’s fourth Paper Mario role-playing game. It should understand what makes its turn-based action so appealing, and if anyone could make this gimmick work, it’s Intelligent Systems.

Turns out that isn’t the case. 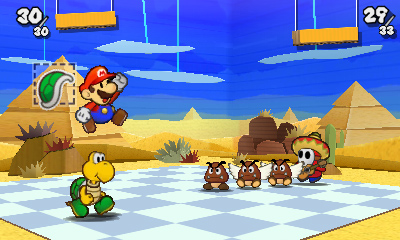 The charm and the wit
Paper Mario: Sticker Star is funny, colorful, and weird. When it comes to writing, the team at Nintendo that handles these role-playing games (the Paper Mario and Mario & Luigi series) make every other game developer look silly.

I can’t really describe what makes it so great without spoiling it, which I’m about to do, so if you’re gonna play this, just skip to the next section.

Sombrero Guy is my new favorite anything.

In the desert world, a mariachi-guitar-playing Shy Guy (the masked enemy from Super Mario Bros. 2) called Sombrero Guy appears in every battle. If you stomp a Goomba to engage in a fight, Sombrero Guy will slide in right as the screen transitions. Sombrero Guy strums his guitar to power up the other enemies and then runs away if it looks like Mario is about to kill him. This climaxes with Mario facing off against an entire band, including an Accordion Guy and Maracas Guy.

A few hours later, I was directing Mario up a snowy hill. We came to a barren cliff. I guided the Italian plumber to the edge when Birdo, the pink dinosaur-like thing from Super Mario Bros. 2, slid down a rope swing and began rocking back and forth while serenading me. I was giggling like a goon when the song ended and Birdo dropped off a statue of a goat. Yes, a goat.

I took the goat statue and turned it into a sticker, which is a feature that I’ll get into more later. Normally, when I get one of these special stickers, I hold on to them, but I needed to know what this one did. I found a Goomba to test it out on and was delighted to find that when used in battle, that sticker causes a giant goat to descend down and begin chomping on Mario’s enemies for massive damage.

If that sequence doesn’t make you want to play this game, you’re safe to skip Paper Mario: Sticker Star.

Commitment to the paper theme

Visually, this is my favorite 3DS game. It has such a consistent logic it to its design. Everything is made of paper. Fire? Paper. Rain? Also paper. You can flip puddles upside down by slamming the nearby ground with a hammer to reveal that the other side is a dry piece of plain paper.

A  thick cardboard material makes up the world. You can see the seams where someone folded the terrain together like an elementary-school diagram. It gives the entire game a playful, welcoming vibe.

The paper gimmick seeps into the gameplay and narrative as well. Goombas can fold themselves into paper airplanes to increase their attack power, or they can fold together to create a double-sided Goomba. Early on in the game, you find a Toad hiding in the house, only to realize that it’s several Toads stacked on top of one another. It’s clever and surprising.

Sticker Star has a coherent artistic style and every aspect of the game is better for it. 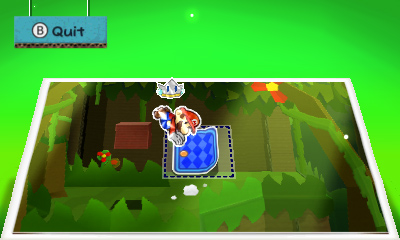 First, I couldn’t get over my aforementioned neuroses, and I suspect most of you won’t be able to, either. I wanted to hang on to the more powerful stickers in case I needed them later. What’s worse is that the developer didn’t design around this. You absolutely do need to hang on to your more powerful stickers, because you will need them later. This wouldn’t be as much of a problem, but for most of the game, Mario only has a tiny album of just a few pages to keep a finite number of stickers. Sure, you’ll get extra pages, but then the more powerful stickers start coming in larger sizes, and each battle has more enemies, so you’ll go through more stickers. It doesn’t matter. The more space you have, the more space you’ll need.

Additionally, stickers serve both as weapons in fights and as items in the world.

For example, in previous Paper games Mario could find a hidden block by hitting it with a jump. This time you have to stop the game to “paperize,” which you perform by hitting Y at any time. This triggers a three-second animation that flattens the world so Mario can select and place a sticker in specially marked areas. Of course, you can’t just stick it — you have to guide Mario back and forth to make sure that the sticker remains in place. It takes a simple concept and stretches it out into a mind-numbing chore. 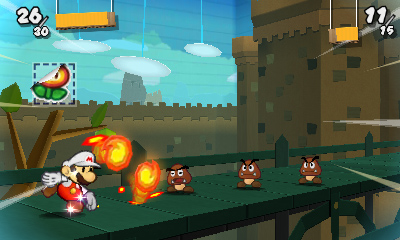 Bigger cutouts represent areas that need the bigger special stickers. Throughout the world, Mario will find special 3D objects, like a lighter, an electric fan, or a goat. Those items sit in your inventory until you trek to a few special places around the map and turn them into stickers. Once they’re stickers, they take up a huge percentage of your album. These stickers can then be used to solve a puzzle or as powerful weapons. You’ll usually only ever want to use these stickers on a boss or to solve the puzzle, which means they sit in your album taking up space most of the time.

What makes no sense to me is that when you use these items in battle, you can travel back to the central town, purchase another 3D model (now that you’ve found it in the wild), and then turn it into a sticker for around 80 to 300 coins. This punitive process adds nothing to the game. In fact, it underscores the stupidity of the one-time-use mechanic. Why can’t I just always have the fan once I’ve collected it if all I have to do is travel back to the town and buy it again?

It is infuriating to run out of the right sticker. It should never happen. When it does, you have to waste time traveling back to the central town, which is another mind-numbing time-wasting task.

It’s fluff — offensive fluff that has no respect for the player’s time.

Obtuse puzzle design
The big stickers, like the fan and the goat, can often be used to solve the Sticker Star’s many puzzles.

In one of the desert stages, a tornado is causing a major dust storm. You can’t do anything in the stage until you get rid of the dust storm — although nothing really tells you that. What I found strange is that the key to solving the puzzle, a vacuum that sucks up the twister, doesn’t exist in that stage.

You have to find the vacuum in another level, turn it into a sticker, and then make the cognitive leap that a normal house vacuum can suck up a perpetual desert tornado. It’s a lot like some of those old PC adventure games where the puzzle designer is kinda using a gag that you may not necessarily understand. This leads to a lot of trial and error, but of course, when you incorrectly use a sticker on a puzzle, it disappears and you have to go track down another one or buy it from a shop. This is the epitome of terrible game design. It made me dread every puzzle that I didn’t immediately understand. I ended up finding a save point in each level and trying every single sticker until I found one that worked. I’d then restart my game so I could reclaim all of my items.

Since these puzzles obey no central logic, and since the correct sticker isn’t hidden the same level, I found myself stuck at several points throughout the game. A few puzzles are clever, but most are shoddily designed and left me with no sense of accomplishment as I stumbled through them.

This was a tough one for me. I treasure surprise and delight in anything that I consume, and Intelligent Systems’ Paper Mario: Sticker Star contains so much delight that it’s infectious. Unfortunately, those fuzzy feelings are often punctuated by a design mechanic that is broken. The developer had the kernel of a good gimmick here, but it didn’t spend the necessary time to make it fun. That and the illogical puzzles would be enough to cripple most other games, but this one just barely skates by on its charm.

Paper Mario: Sticker Star is that one handsome and funny person we all know that is terrible with money and relationships. They’re broken, but they get by because they’re likable.

I can overlook a lot because of Paper Mario’s charm. I really enjoyed a lot of it in spite of it committing the terrible sin of wasting my time.

Paper Mario: Sticker Star for the Nintendo 3DS releases November 11 in North America. The publisher provided GamesBeat with a 3DS eShop download code for the purpose of this review.