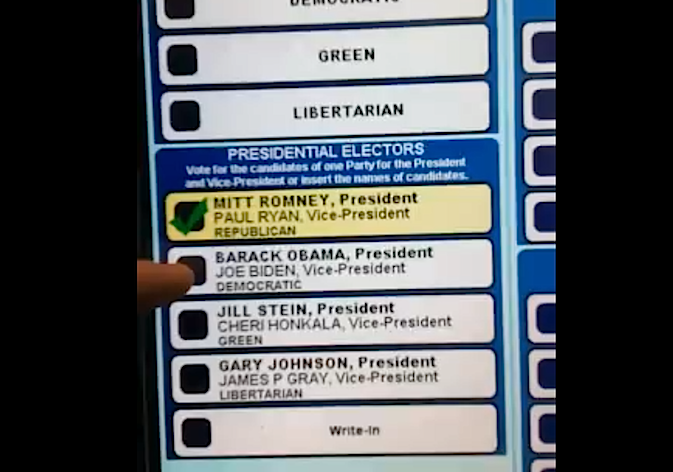 Are you tired of Bronco Bama? Well, so is this voting machine. It wouldn’t let a Pennsylvania voter select Barack Obama for his presidential pick, and instead continually highlighted Mitt Romney.

According to MSNBC, the machine is no longer in operation and was quickly taken out of the voting facility after the voter, a Reddit user, posted to the community news sharing site. There, Redditor “centralpavote,” explained the situation inside the voting booth. It was an electronic voting machine with a touch screen. Each time he selected Barack Obama, the screen selected Mitt Romney. A software engineer, “centralpavote” attempted to click on the candidate below Barack Obama, Jill Stein, but it correctly highlighted Stein. He then tried to find “active areas,” or areas on Barack Obama’s button that would trigger the vote, but he still couldn’t get the machine to respond. He finally found a “small white sliver” on the screen that allowed him to vote for Obama.

“I asked the voters on either side of me if they had any problems and they reported they did not,” he said on Reddit. “I then called over a volunteer to have a look at it. She him hawed for a bit then calmly said, ‘It’s nothing to worry about, everything will be OK.’ and went back to what she was doing.”

That’s what let him to take a video using an Android phone of the glitch and upload it to YouTube under the same name. You can see the video below. He assured readers on Reddit that the video was real and promised to send raw footage as well.

The problems here are obvious. Technological glitches such as these can lead to lengthy vote re-counts, though it can help speed up the voting process as well. For now, it seems the booth has been removed, and thankfully the glitch is fairly hard to miss.