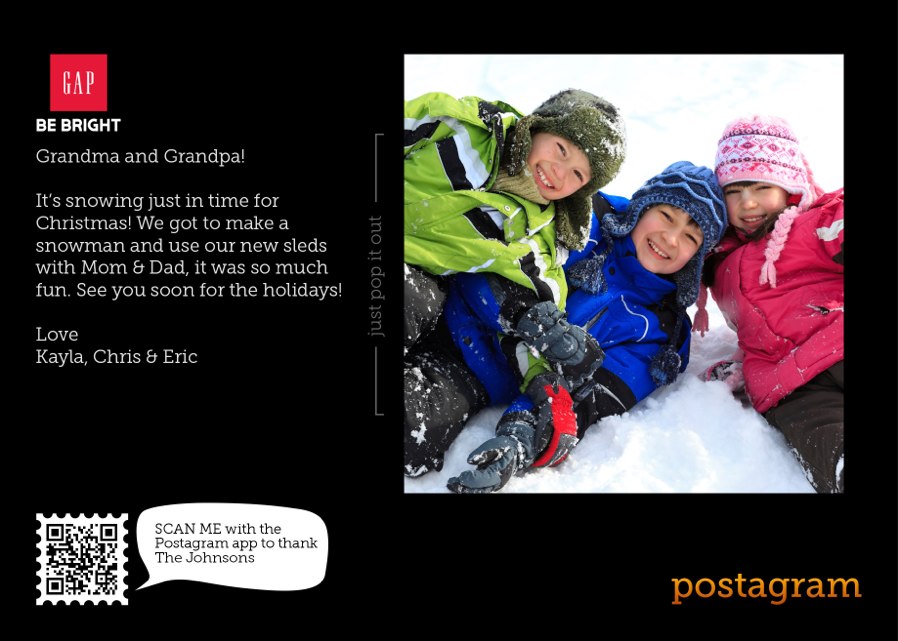 If a picture is worth a thousand words, what’s the value of a postcard? The Gap hopes to find out.

The apparel maker today launched a holiday postcard promotion on Facebook with an application powered by startup Sincerely. The company is allowing fans to send their own Facebook photos as real, printed postcards to social network friends free of charge.

The Gap is giving away up to 1 million free postcards through the end of December. The cards, which are delivered with a pop-out square photo and a message from the Facebook sender, typically retail for $0.99 a piece. Gap fans can send up to two free postcards.

The brand’s sentimental holiday initiative is the result of a partnership with keepsake startup Sincerely, which makes a mobile application called Postagram for mailing Instagram, Facebook, and mobile camera shots as postcards. The Gap is the first brand to take advantage of Sincerely’s brand-centric service Postagram Direct, launching today.

Postagram Direct ports the standard postcard product to a custom-branded Facebook experience where companies like the Gap can offer their fans the sponsored printed freebies. Brands can also add logos, coupons, hashtags, or QR codes to postcards. Direct customers pay a campaign setup fee, along with a monthly fee based on the number of cards sent.

“This partnership happened because the Gap’s head of social media is a user of Postagram,” Sincerely CEO and co-founder Matt Brezina told VentureBeat. “They think photos are important — and loved the idea of tying their brand to something as tangible and emotional as a card sent to a loved one in the mail.”

Sincerely competes with Apple, which makes a greeting card application for iOS, and a host of other applications and print shops helping smartphone owners transform digital captures into tangible treasures. The two-year-old startup has raised roughly $3 million in funding and recently partnered with Facebook to test a postcard feature for the social network.