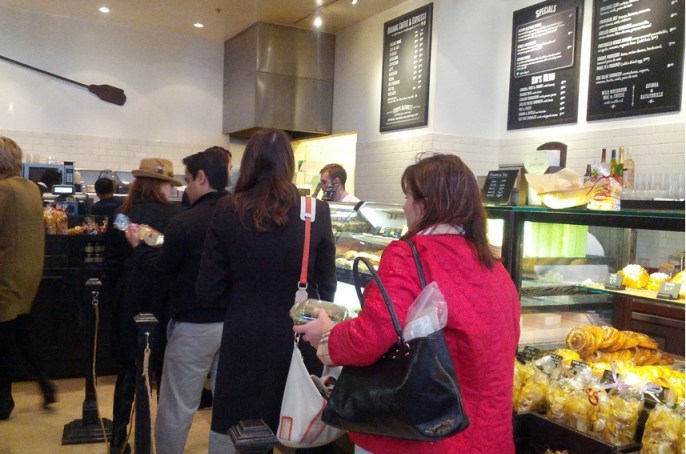 I had a magical mobile payments experience today. I walked into La Boulange in San Francisco, bypassed the line, picked up my croque monsieur and started eating. I didn’t pull out plastic, or scan a QR code, or say my name. I had ordered from my iPad mini with La Boulange’s app.

This is another case where mobile payments solves a real problem, like paying for parking meters. Swiping a credit card is not hard, but waiting in line can be painful. I estimate that I saved at least 10 minutes during the lunch rush.

“The big news on the coffee front is that Square launched with Starbucks today, so now you can stand in line, order the old fashioned way, and pay with the Square Wallet app instead of paying with the Starbucks app or cash or credit card,” said Noah Glass, founder and CEO of OLO, the company that made La Boulange’s app. “And while there will certainly be a lot of press about that, Starbucks’ beloved La Boulange brand already lets you order ahead and pay ahead from the La Boulange app and skip the line entirely with OLO.”

The app itself needs some significant UI help, but once I got through the process, the order was ready by the time I walked from my apartment to the restaurant.

Other companies offer online ordering for restaurants: GoPago, GrubHub, Seamless, and Eat24Hours. What makes OLO different is that it integrates with commonly used restaurant point-of-sale systems like Aloha, Radiant, and MICROS. (Disclosure: I own stock in MICROS.) The company also helped write an open standard for self-serve ordering with the National Retail Federation. Restaurants don’t have to set up a separate workflow for orders that come in through a mobile app. OLO also charges a flat monthly fee instead of a per-transaction fee. That’s more appealing when a business has high frequency; restaurants don’t want to pay 5% to 30% on every order just to offer the convenience of mobile ordering to their customers.

OLO also develops the apps under the restaurant’s brand. This is both good and bad. Although brands want to have an app, consumers don’t want to load up dozens of apps to deal with each place they might visit. This only really works for high frequency brands like Starbucks and Chipotle. (La Boulange would also fit this requirement.) In addition to La Boulange, OLO provides mobile ordering services for Five Guys.

Although OLO works well today, any mobile ordering or payments solution faces a challenge: often, the gating factor is not the speed of ordering or payments, but the speed of preparing your order. If you’ve ever been to an In-N-Out Burger during the lunch rush, you’ve experienced this. Their super-simple menu means that the ordering line moves very quickly. But then you end up waiting while they shout out 30 numbers before yours.

Mobile ordering has the potential to help smooth demand, resulting in shorter lines for everyone. When I initially tried to order, I requested a 12:15 pickup. I was told that the earliest my order could be ready was 12:26. I shifted my order to 12:30 and got another 15 minutes’ worth of work in.