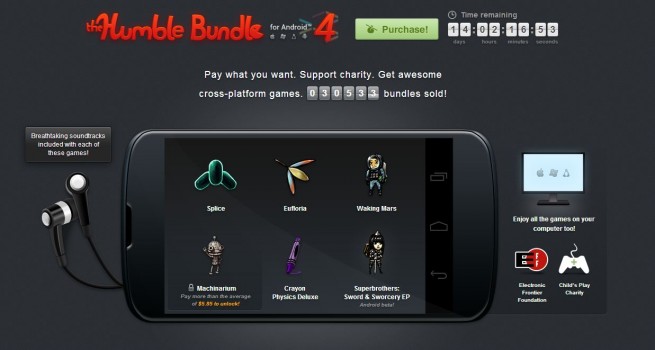 The best deal in gaming is back with its fourth Android-focused offering.

All of these are compatible with Android, but you’ll also get PC, Mac, and Linux versions.

As usual, all of the money is split between the developers, charity, and the Humble Bundle organizers. As with previous promotions in this series, the charities are Child’s Play, which provides toys to sick kids, and the Electronic Frontier Foundation, which lobbies on behalf of technology.

The Humble Bundle for Android 4 is special because each game (except for Machinarium) is making its debut on the Google mobile operating system. In the case of Superbrothers: Sword & Sworcery EP, this is a game that the developer said it would probably never release on Android.

So, if you have a Galaxy S III, an HTC One X, or whatever, then you should probably go give your money to Humble Bundle, since it’s doing a better job of getting games on Android than Google is.