Clearly, something is slowly shifting in the venture capital landscape. In the old days, investors would rely on the home run hits (Facebook, Apple, LinkedIn, and so on) to offset the failures in any portfolio. It took a combination of luck and intuition to pick out the hippie, greasy-haired Steve Jobs or college dropout Zuckerberg. With each fund, investors hope that at least one of their entrepreneurs will have the talent, guts, and persistence to compete in a crowded market.

August Capital investor David Hornik sees some profound problems with the algorithmic approach. “There are too many variables and too few data points to derive any meaningful signal from the venture noise,” he told me. “If you are a good venture investor, you are better off applying your own judgment than you are collecting data on how everyone else invests and performs.”

But firms may have no choice but to investigate these new quantitative methods. Recent studies reveal that over 75 percent of venture-backed companies fail. This number seems high — especially given the sheer amount of research that precedes the typical investment. In Silicon Valley, a firm will track between 6,000 and 9,000 new companies that form each year. For perspective, Trinity Ventures‘ general partner Ajay Chopra told me that his team will meet with 2,500 of these startups. With each fund cycle, Trinity typically selects about 20 of them.

Firms are facing pressure from all sides, particularly from their limited partners (“LPs”), who expect to see evidence of innovation (see recent criticism from the Kauffman Foundation about the “broken” venture capital industry).

Making money on a base-hit

The latest crop of firms to bloom in Silicon Valley are staking their success on the data. 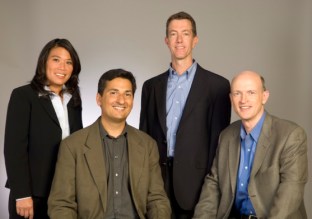 “Early on it was very tough to be a pioneer,” said Trevor Kienzle, the general partner at the Palo Alto-based firm Correlation Ventures (pictured left). “You can always tell the pioneers from the arrows in their back.” At first, the premise fell on deaf ears; it took six years, and some steely perseverance, to raise the first institutional fund.

This year, the firm raised $165 million, the largest first fund since Andreessen Horowitz got started with $300 million in 2009.

The new model stands out in a number of ways: It’s heavy on diversification, modest successes rather than home-runs, and rapid decision-making — startups can expect a “yes” or “no” in a few weeks. The fund is also extremely flexible: Its partners can invest up to $4 million and have no lower limit (they can go as low as $50,000). In addition, while most investors are taking an active role in their companies, the partners don’t take board seats.

The idea is that not every tech startup needs to have a billion-dollar IPO — a well-negotiated acquisition can yield a decent return.

The only hard and fast rule at Correlation is that it will not lead investments, only participate. It seems to be working. The current portfolio includes hot startups like Getaround, a peer-to-peer ride-sharing service; digital media company Say Media; and productivity tool PowerInbox.

“With our five person analytics team, we are constantly updating our dataset both for new exits and financings,” Kienzle told me. He would not disclose the factors it uses to determine whether startups will succeed, but he said that there are marked differences to Wall Street’s trading algorithms for the public markets.

“You are trying to capture factors that are fleeting,” said Kienzle. “We have been careful to build a model that is robust over time to sector and stage [and] are going back through multiple cycles of venture.” Another challenge is that much of the data is not as publicly available — the legacy firms are notoriously bad at tracking their meetings and investments. A few firms have voluntarily handed over their data to further the research — but they will never sell it, he said.

Late-stage investment firms have been at it for years

For OpenView Venture Partners, a late-stage firm, algorithms are the future of venture capital.

“Where I think an algorithm will be most valuable is the timing on the market and the funding is the right amount,” said Adam Marcus, OpenView’s managing director.

In a phone interview with VentureBeat, Marcus said that his firm uses software to mine publicly available information like job postings and press releases and to capture social data around conversations.

Marcus said it’s ironic that venture capitalists laud the advent of “big data” analytics tools and technologies but are not applying them to their own corporate strategy. “When it comes to software as a service [Saas] technologies, we invest, drink the Kool-Aid, and use it to run our firm,” he said. “It’s a way for us to stay competitive.” However, he admits that it’s a tougher problem for early-stage firms, with fewer key performance indicators (KPIs) available for review.

Entrepreneurs have taken matters into their own hands. The launch of a research project known as “Startup Genome” stimulated debate in Silicon Valley. Still in beta, the project, has already received over 35,000 registrations.

Popular with angel investors and startups, the tool aggregates public information and data from the startups themselves (soon it will build APIs through Salesforce, Quickbooks, and other applications). It uses machine learning and natural language processing to benchmark a startups’ key performance indicators against similar companies. It also runs more than 50 red flag tests to calculate a company’s fundability and risk profile.

The 50-page report was authored by faculty-members at Stanford and Berkeley Universities. The key findings from an analysis of 16,000 startups include:

Factors that improve the odds

Factors that decrease the odds or don’t make a difference