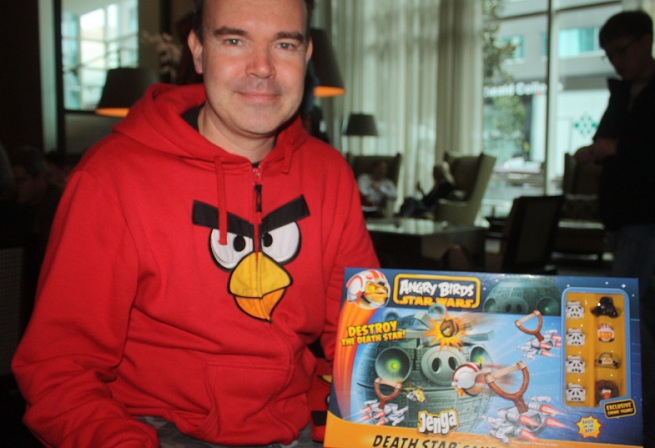 Mobile-game juggernaut Angry Birds has been downloaded more than a billion times, and publisher Rovio isn’t done with it yet. The company launched Angry Birds Star Wars on mobile devices last Friday, and it also debuted a whole line of Hasbro-made toys featuring mash-ups of Angry Birds and Star Wars characters. The double-barreled launch shows that the feathered franchise’s slingshot gameplay can be applied to just about any theme, and Rovio could very well have an endless series on its hands — as long as fans don’t get tired of it.

Rovio launched its fourth Angry Birds title this year as part of its ambition to turn its characters into the next Mickey Mouse. Peter Vesterbacka, chief marketing officer of the Helsinki-based outfit, said in an interview with GamesBeat that Rovio hasn’t hit a wall yet when it comes to growth. In fact, he said the company no longer thinks of itself as just a game maker. Like Disney, Rovio is shooting to become a broad entertainment organization. Here’s a transcript of our edited interview. 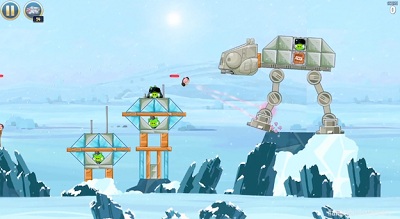 GamesBeat: So how long has this been in the making for you?

Peter Vesterbacka: The contract was finalized in March. We work pretty fast. We got the physical products out in record time. When we first talked to Hasbro, they said it was impossible, but then they surprised us and themselves. We got them out sooner and in much bigger volume than we thought. It’s been a great experience from that perspective. It was very fast. We’ve been working on the game about a year.

GamesBeat: What’s unique about the design of this game?

Vesterbacka: We’ve taken the best of Angry Birds with the best of Star Wars and merged it in a very organic way. If you have your Luke bird, it’s like the traditional red bird, but now it has a lightsaber. Or Han Solo meets the yellow bird with lasers. One thing we used, as an example, now the pigs also shoot lasers in some levels. When you then use the lightsaber, you can deflect the lasers. It’s these funny little details from the movies that [make it fun]. In the Star Wars movies, you always see the lasers bouncing left and right and going everywhere. We made sure you can see that in the game. There’s an amazing attention to detail. We worked very closely with Lucas.

Vesterbacka: Yeah! They’re funny. That’s what we loved about the collaboration. It’s peanut butter and jelly. It works. Everything fits. You see a lot of very forced collaborations, but this is just fun.

GamesBeat: Now you have four games a year coming out. Do you think you’re going to maintain that pace? 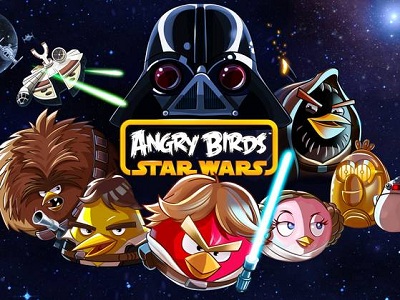 GamesBeat: Amazing Alex was a new intellectual property that you launched. Are you encouraged by the sales results, or does it suggest you should do more Angry Birds-all-the-time stuff?

Vesterbacka: I’d say it’s a bit of both. On one side, we’re very happy with the numbers for Alex. If you look at it as a new franchise, totally new everything, from that perspective it’s very good. But if you compare it to when we do a new Angry Birds game, those numbers are … a bit bigger.

Still, we always have to think about when we launched Angry Birds. We have flyers saying something like, “Angry Birds: 500,000 downloads!” Now it’s like, “Really? How could we have thought that was anything?” But, at the time, it was a big deal. When I first talked about how we were going to get 100 million downloads, everyone at the company thought I was crazy. Outside the company too. One-hundred million? Only Tetris had done that. Now it’s like a footnote.

Look at our Bad Piggies launch. We launched on the 27th [of September]. It’s been number one until now, when we bumped it down with Angry Birds Star Wars. The amazing launch is part of the Angry Birds universe — it piggybacks on that — but it’s off to a much faster start than Angry Birds. That’s also true for Amazing Alex. We have more downloads than we did for the original Angry Birds at this point. So everything is relative.

We’ll continue doing more Angry Birds, more Bad Piggies, more Amazing Alex, more other things. If you look at Rovio, you could say Angry Birds is our Coke, but we’ll keep doing Sprite and Fanta. Angry Birds is our main brand, but it’s OK to do smaller things. Smaller for us can still be tens of millions.

GamesBeat: So what’s different about how Rovio can launch new titles?

Vesterbacka: We’re learning new things every day. At the same time, we’ve grown a bit. We’re now 500 people. With more people, that always introduces new challenges. But we’re happy with how fast we can move. If you look at last year, we launched one game, Angry Birds Rio. This year, we launched Angry Birds Space, Amazing Alex, Bad Piggies, and Angry Birds Star Wars. We had four big launches, and that’s just the games side. We’ve done tons on the animation side. Merchandising is seeing explosive growth. Everything is growing constantly.

GamesBeat: How do you keep this going? Media people are starting to like the angle of, “Well, this fad has to die out soon.”

Vesterbacka: Well, look at Mickey Mouse. Mickey Mouse has been around since 1928, and he seems to be still alive and kicking. Hello Kitty, since 1974. Mario, quite a while. Star Wars, 1977, still going strong. There’s always people who speculate about when we’ll do this or that thing. We’re not worried about it. It’s our job to keep it fresh. We’re working closely with Sanrio in Japan, the Hello Kitty guys, and now of course with Lucas. You could also have looked at Star Wars as a fad and argued it wasn’t going anywhere….