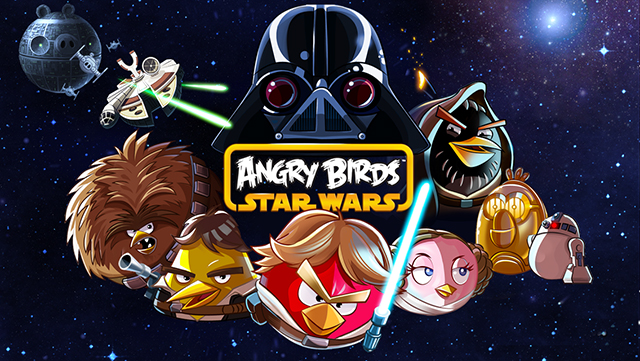 That was my initial reaction when I first heard about this unusual crossover for iOS, Android, PC, and Mac. Those two brands seemingly have nothing in common, with the possible exception of their massive market appeal. I feared this would be another lazy cash-grab exploiting the beloved characters from George Lucas’s expansive universe.

Imagine my surprise when I found out that Angry Birds Star Wars is one of the more fun and charming Star Wars game in some time.

Best of two worlds
Developer Rovio splits the levels in Angry Birds Star Wars between traditional ones and stages based on the more recent Angry Birds Space. You catapult your miffed poultry at buildings and enemies all in the hopes of clearing the screen of your foes while causing as much damage as possible. The space levels work with the same concept, but gravity (or the lack of) plays a more important role. 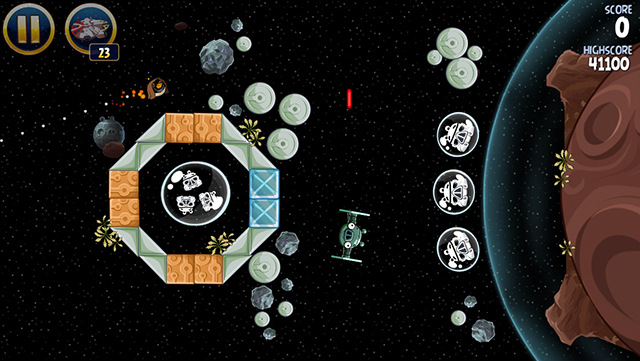 Using both types of gameplay gives Angry Birds Star Wars levels more variety than its predecessors, and it’s a fitting design decision since the famous movies take place both in space and on more solid ground.

Use the force, birds
Every colored bird from past games in the series has their own special ability. This is still the case here, but instead of dropping exploding eggs or slightly increasing your speed you’ll be swinging lightsabers and shooting blasters.

These powers are appropriate, fun, and offer a few surprise twists. Luke Skywalker can swing his lightsaber around him with a tap of the screen, but you can also use this move to reflect enemy blaster shots. Han Solo can shoot his own gun in any direction you tap on the screen, but you can also use metallic surfaces to bounce his shot around the area.

Clever level design brings out the best in these abilities, with many of them forcing to think of clever strategies outside of just shooting your birds toward your targets. Sometimes you’ll have to use Obi Wan’s force push to topple a stack of crates onto a group of enemies, for instance.

Great use of the setting
Some fans get upset whenever their beloved Star Wars isn’t taken with total seriousness (remember all the fuss made about the dancing game in Star Wars Kinect?) I have no problem seeing sillier takes on the series, so I’m more than happy to laugh along with Angry Birds Star Wars. It’s hard not to smile when see you all of these iconic characters reimagined as limbless poultry and pork. 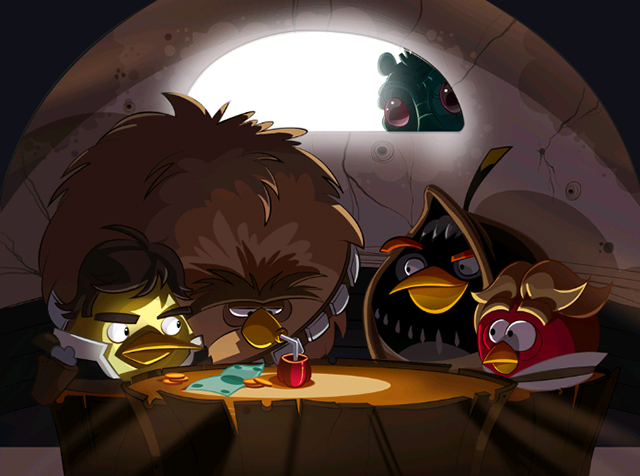 The game even manages to cleverly re-create some iconic moments from Episode IV, like the trash compactor scene (which you can use in a level to efficiently squish some Imperial piggies) and the famous trench run from the movie’s climax.

I have to give equal credit for what is not in the game, specifically anything from the terrible prequel trilogy. All of the initial levels take place during the classic, original film. You can also buy an additional set of levels focusing on Luke’s Jedi training on swampy Dagobah during The Empire Strikes Back, and a free update promises to add stages set on snowy Hoth from that same movie. This means you’ll be flinging around Luke, Han, and Chewie without a single Jar Jar Binks or Anakin in sight.

Angry Birds Star Wars is clever enough to still feel fresh most of the time you’re playing it, but the game can’t escape the fact that this is all familiar territory, even with the nice Star Wars dressing. The franchise fatigue is likely to hit you much harder if you aren’t a fan of Star Wars, which deprives you of the ability to enjoy the game’s many nods at the classic movies. 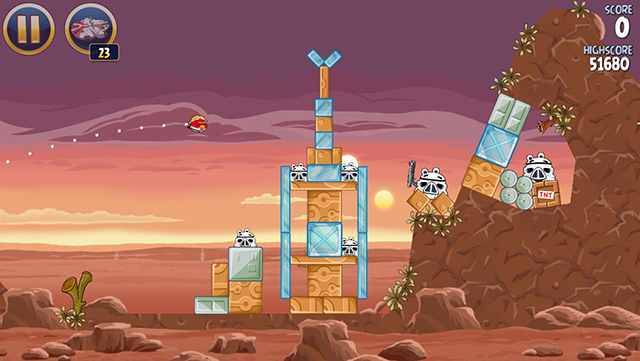 Is Angry Birds Star Wars an easy cross promotion between two hugely popular properties? Sure. But who cares when it’s this much fun to play? Angry Birds Star Wars is far from the most original game you’ll play, but the addicting formula still works great, and fans of the classic movies will love seeing this silly take on Luke Skywalker’s adventures.

Clever design and fun powers make this a great place for newbies to see why the series has become a cultural phenomenon if they haven’t experienced Angry Birds before. If you are a Star Wars fan, then this will be your favorite take on poultry-flinging yet.

Angry Birds Star Wars is out now for iOS, Android, PC, and Mac.