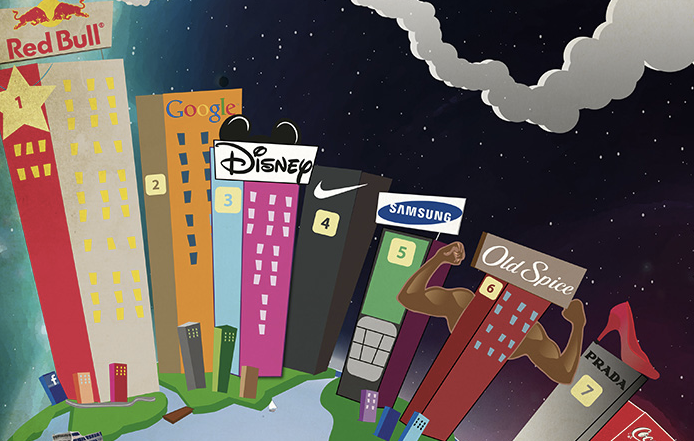 Red Bull leads all brands in viral videos, according to a new study by viral video creator Goviral. Google came in second, followed by Disney and Nike. And it seems that mocking iPeople works for Samsung: The Korean company slid into fifth position on the list, six places ahead of bitter competitor Apple.

The Old Spice guy still has some life in him, years after becoming the face of corporate-sponsored viral videos. Old Spice came in sixth position, ahead of much larger and richer companies such as Intel, Pepsi, Visa, and Microsoft. The brand currently has a staggering 308 million aggregate video views on its YouTube channel.

To build the list, Goviral reviewed four factors: the raw number of views a company’s videos received, the company’s Interbrand ranking, which shows how valuable its brand is, the engagement that the uploaded videos stimulate, and a subjective measure of quality, innovation, and relevance.

There are clearly different strategies for getting top slots.

Google and Apple tend to do product videos that demonstrate features without trying overtly to be viral, although Apple’s new iPad mini ad mixes in a little of the unexpected, and Google’s Field Trip video is gripping and poignant. Old Spice relies on humor. Red Bull focuses on amazing exploits and Rube Goldberg machines that trigger wildly improbable chains of causality, often ending in a product shot.

In car brands, the Germans appear to have a lock on viral videos, as BMW, Volkswagen, Mercedes, and Porsche claimed spots 12, 13, 15, and 22, respectively. Interestingly, Kia won 28th position, ahead of Ferrari, Ford, and Audi, showing that a young and aspiring brand can still break through in social media.

Some of the surprises include SAP, Accenture, Siemens, and GE, all of which made the list in spite of perhaps not being the most exciting or obviously viral-type brands.

For the full list, with rankings, check out Goviral’s report.