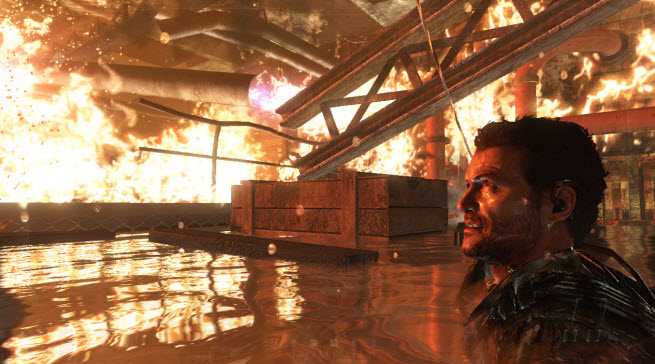 My arms feel like they’re permanently vibrating from all of the machine-gunning I’ve been doing lately. I’ve played just about every aspect of Call of Duty: Black Ops II, and I have the sore wrists to prove it. As the holidays approach, Activision Blizzard is launching its ninth installment in the Call of Duty military combat series, and this one is as violent, action-packed, and as full of adrenaline as ever before.

So much for peace on Earth.

Each year, Activision generates more than a billion dollars in sales from Call of Duty games. In order to hold the title of the fastest-selling game in history, the developers at Activision’s Treyarch studio have to keep trigger-happy gamers feeling like the game has something new to offer. On this front, Treyarch has delivered. Call of Duty: Black Ops II is loaded with so much content that its $60 price seems like a bargain, and everyone else in the industry is going to have to meet a high bar if they want to hang on to the attention of gamers as well as this title does.

This game has so many elements that it is four games in one. It includes the single-player story campaign with 11 missions. On top of that, it has five single-player Strike Force missions, the Zombies cooperative play game, and multiplayer gaming with 16 maps and several new modes at the outset. The single-player campaign may keep you busy for eight hours or so (I played it on the Hardened difficulty (which is one notch above Normal), and it kept me busy for about 12 hours), but the whole package is meant to keep you occupied with Call of Duty so that it becomes a round-the-clock, year-round part of your life.

Let’s give a rundown of each of the major elements. 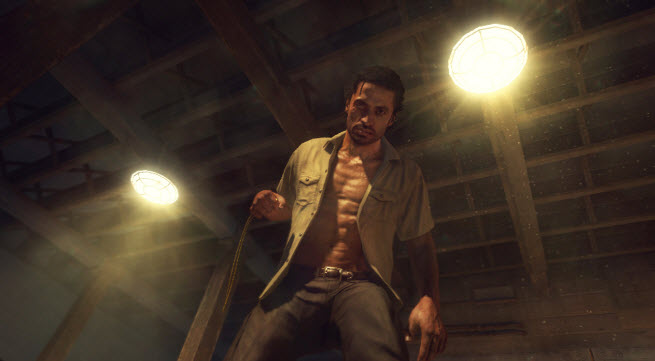 The narrative spans more than a generation, from the 1960s to the year 2025. The story from Oscar-winning screenwriter David S. Goyer depicts a decades-long struggle to stop a mad man from causing a world war. At the outset, you meet Raul Menendez, the eventual villain, as a child. He goes through a horrendous experience that shows how he came to hate America and turn into a murderous psychotic. The characters from the original Call of Duty: Black Ops — Frank Woods and Alex Mason — try to stop Menendez, but each time he escapes and leaves a trail of bodies.

By 2025, Menendez reaches his psychotic potential. He builds himself a worldwide terrorist empire. He seizes control of the supply of “rare earth elements,” or metals found in most electronic products. That is a key chokepoint in the world’s electronics supply chain, and it also gives him a path to launch a cyberattack. Then Menendez executes an improbable but ingenious plot to hijack the American military’s fleet of drones. He destroys Los Angeles and then sends the drone fleet to attack China’s biggest cities, threatening to draw the superpowers into a war. And he does this all because he wants to get back at those who emotionally and physically scarred him for life in his childhood. A small group of “black operations” soldiers, including David Mason, the son of the first game’s hero, Alex Mason, stands in the way of Menendez.

The story can be hard to follow, particularly when Menendez drops out of the picture. Treyarch constructed this tale on top of compelling characters (such as Woods and Alex Mason) and gripping and gruesome scenes. And the story’s scope is so sweeping that it exposes the player to what the world’s battlefields of 2025 might be like. The story makes you think about how far you would go to stop a man like Menendez. Like any good cinematic video game, it makes you think.

It has a couple of disturbing parts in which you play the enemy, and those are sure to raise alarms among concerned parents (and media and politicians looking to score some cheap points). You have no choice but to go on a murderous rampage, shooting the good guys or even civilians. As the player pursuing the villain, you make some critical ethical decisions about whether to shoot a captive or show him mercy. Often you don’t have a “right” decision. The story has multiple endings, adding some variety and replayability to the campaign. 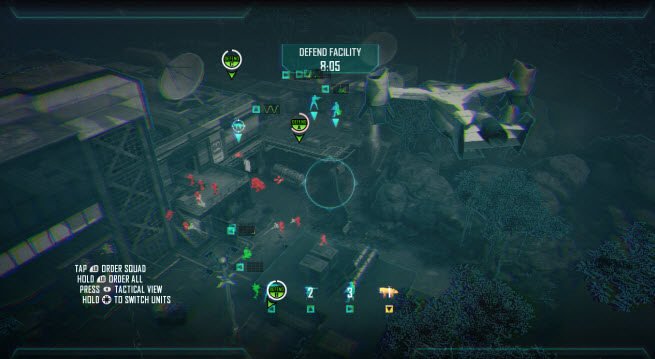 Strike Force is a difficult new subgame where you can control teams of drones, armored robots, and infantry squads to take objectives on a map. The Strike Force missions throw you into an open-world sandbox. You can play it like a real-time strategy game, viewing the action from a commander’s view. But you can also tap your controller button and assume command of an individual if you wish. You can play as a drone, a Claw (a mech that looks like a bear), or a soldier.

You can play these matches as a micromanager, fighting as a single soldier. But if you don’t pop out and view your assets, you may frequently find that you’re lone warrior is the last one left. The trick is being able to focus on the key action even as multiple firefights erupt on the ground. Strike Force missions has five missions, not counting a tutorial, and they’re all pretty hard, even though you’re playing against computer-controlled enemies.

In contrast to the Zombies cooperative mode, the Strike Force outcomes are integrated into the story in some way. But I didn’t really grasp how it fit. 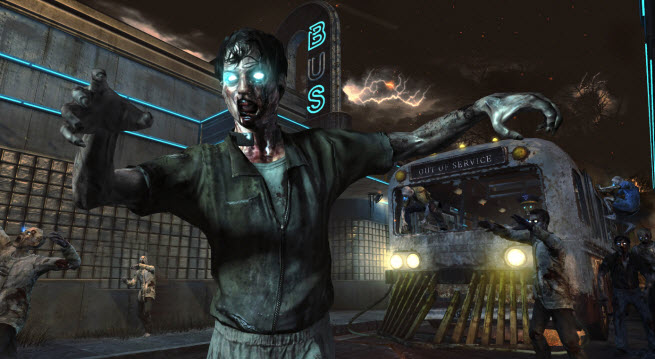 In Black Ops II’s Zombies, Treyarch has introduced a cooperative mode that is like a campaign unto itself. For the first time in the Call of Duty franchise, Zombies comes with its own version of a story. You journey through a wasteland in Tranzit, where you ride a bus from location to location, trying to survive and praying you don’t run out of ammo. Always darkly lit, Tranzit is like an open world for the undead.

You team up with other players and take turns popping the heads off zombies. These zombies aren’t dumb biters. They charge at you and set themselves ablaze in hopes of engulfing you. That makes them a lot more terrifying, and it’s more satisfying when you blow their heads off.

But if you can make it back to the bus and keep the zombies off you, then you can ride on to the next stop. You really do need four players to defend a piece of ground or keep the zombies off the bus. It really helps to communicate via headset so that the more experienced players can guide the newbies — or just to hear the screams and curses when the last survivor dies and the game ends.

Black Ops II’s Zombies mode also has extensive stat tracking and leaderboards. It has a skill-based matchmaking system and modes such as Grief (humans vs. humans vs. zombies) and Survival, where four players have to survive never-ending hordes in select locations from within Tranzit. 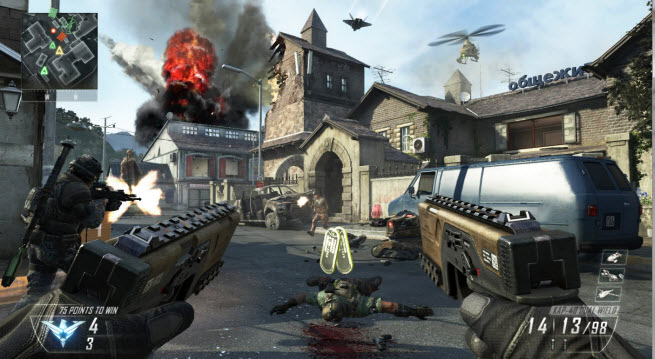 The multiplayer game comes with its own Bootcamp combat tutorial, so you to play with bots and learn the maps and tactics before go against people who quit work so that they can play Call of Duty full-time. Multiplayer is fun, but it has the same pluses and minues that make hardcore gamers swear by it and neophytes fearful of it.

Treyarch succeeded in remaking multiplayer with different game modes, such as Multi-team, where as many as 18 players fight on six different teams. Another addition is Hardpoint. In this mode, you take and hold a section of the map while the enemy tries to take it away. Every few minutes, the Hardpoint moves to another location, and you have to assault it again. No other multiplayer map has a way to draw players into a massive firefight like this one. Nothing about it is realistic, but it sure is fun. It gets rid of the waiting time that always occurs just as you’re about to get into combat. This is like combat all the time.

With 16 maps and many different ways to play them, the combinations are endless. And once you get tired of what Treyarch has created for you, you can fashion your own custom games and invite your friends to play them. You can also try your hand at eSports via League Play, which offers skill-based matchmaking so your bracket will include people who are a good match.

The multiplayer has 55 levels. Once you hit 55, you earn yourself Prestige. And you can earn the Prestige rank 10 times over. You don’t have to agonize about starting over. You can now restart the progression with all of the weapon experience and earned attachments you already have. If you hit level 55 10 times over, then you become the Prestige Master and unlock everything special in the game.