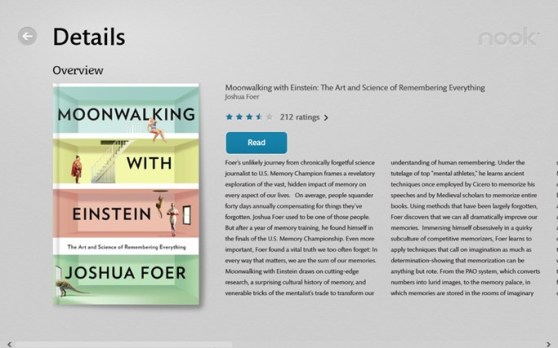 Barnes & Noble has finally gotten around to releasing a Nook app for Windows 8. The move comes a month after the launch of the operating system and weeks after Amazon launched its Windows 8 Kindle app.

The app, which also runs on Windows RT, offers users access to tons of books, magazines, newspapers and comics. No surprises there.

What is notable, however, is that Barnes & Noble has opted to use its own “paper” user interface rather than following Microsoft’s  styling. For fans of Windows 8’s look and feel, the switch might be jarring, but ultimately it’s not the biggest deal. (The Kindle app, on the other hand, follows the interface very closely.)

Seeing as how Microsoft invested $300 million in Barnes & Noble’s Nook business, it seemed like a sure thing that a Nook app would be available at the launch of Windows 8. Now that the app has been released, expect to see it installed on new Windows 8 and RT devices by default.

Perhaps unsurprisingly, there’s no word yet on a Windows 8 version of Nook Video, which Barnes & Noble announced way back in September.