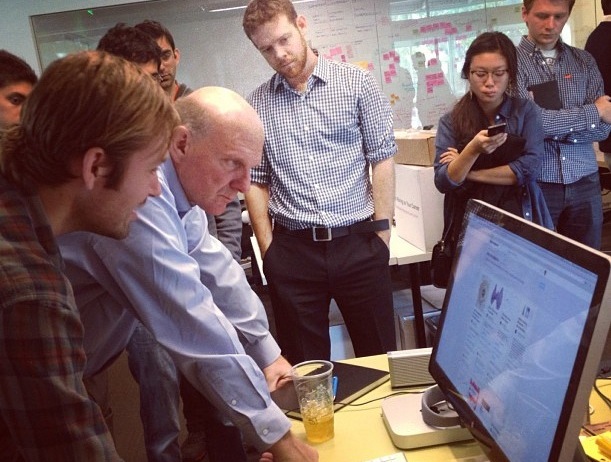 Steve Ballmer is no diva, but he kept 100 senior technology executives waiting around today.

After making a plea for “total Windows domination,” the war-weary executive took a breather. He made the trip to Stanford University to check out the business school and meet with the founders at StartX, the nonprofit Stanford-affiliated accelerator.

“Steve wanted to come by. It’s as simple as that,” said John Melas-Kyriazi, partnerships director at StartX. “His first stop of the day was coming over to spend time with our founders.”

Melas-Kyriazi said Ballmer has been a firm supporter of the program long before Microsoft came on board as a strategic partner. According to a StartX blog post, Microsoft agreed to provide “financial sponsorship, technical resources, and significant scaling and distribution opportunities” to the portfolio companies.

They did not agree to send along their chief executive to provide feedback on elevator pitches. That was Ballmer’s personal choice.

“He was really concerned in understanding where the software was running: the server side, the cloud-based platform,” said Jeff Mounzer, StartX’s managing director.

During his trip, Ballmer received questions from entrepreneurs and played around with four demos. The startups that were given a chance to pitch Ballmer were GameClosure, a company that lets you create games in JavaScript, CloudLeaps, a collaboration tool that lets you visualize relationships in real-time, Appfluence, a cloud-based productivity tool, and Magic Notebook, a knowledge management system.

He revealed his biggest mistakes and what not to do (according to StartX, these were bucketed into two categories: people mistakes and strategy scope/reach mistakes). He also stressed Microsoft’s commitment to entrepreneurship through the Bizspark program, which provides access to free software development tools.

“It was a wide ranging discussion that touched on everything from how he is thinking about the consumerization of IT to advice to founders on building software businesses with depth,” said Alexander Rives (pictured above), Magic Notebook’s founder.

Rives, a fellow Stanford business school drop-out (in 1980, Ballmer left Stanford to join Microsoft) got advice on the company’s technology for structuring vast stores of unstructured data. In recent years, Microsoft has been invested in hiring machine learning experts to explore the “big data” trend.

StartX would not speculate on whether the partnership was intended to lead to any concerted M&A. With the company finalizing its acquisition of StorSimple just hours ago, this may be part of a strategy for Microsoft to forge relationships with up-and-coming Silicon Valley startups located a stone’s throw from its competitors, Google, SAP, and Oracle.